You don’t have to be a masochist to appreciate or enjoy a pickup these days, the new Mitsubishi L200 is proof of that. Of course, it offers up a firm ride, and anyone expecting anything different needs their nuts tightened, but the early days of cart sprung suspension has long since been greatly improved. However, for those of a more tender and sensitive physiology there is always the option of sticking some weight in the load bed to take the sting out of the ride.

The arrival of the Mitsubishi appraisal vehicle coincided with a requirement to recce the route for the 2020 RSAC Scottish Rally and so I offered my services.

It was a grey, dreich and horrible winter day but the chance to drive through some of Scotland’s finest wilderness in Dumfries & Galloway with the permission of Forest and Land Scotland is one not to be missed. Admittedly the speed limit in the forest estate, when the roads haven’t been closed for rallying, is 20mph but even that could have been regarded as a bit quick for some of the conditions encountered on the day.

Most of the gravel roads were in good nick, but conditions in one of the proposed special stages at Eskdalemuir might have provided an ideal location for a World War 1 movie. The pot holes looked like craters and there was an evil layer of slitterry mud liberally spread across the surface.

A normal car would have ground out on some of the depressions, if it hadn’t already come to a slithering halt in the wet muck first, but nothing stopped or troubled the Mitsubishi.

The pickup was shod with 265/60 x 18 Dunlop AT20 Groundtrek tyres. Not the most knobbly of off-road tyres, but a good mix for dual tarmac and loose tread use. Having said that, the rear end required a bit of respect and restraint on the public roads between stages. Even with just 148 bhp it was a bit skittish at times in the wet conditions, although a few logs in the back might well have countered it’s subversive (but enjoyable) behaviour.

There was no real need to select four wheel drive at any time during the day out although it was indeed used in some of the muckier sections, but that was more to provide a comparison than because conditions necessitated its deployment. A light touch on the throttle was all that was needed when conditions were slimy and the tyres did the rest.

That meant there was little chance to appraise the new Super Select 4WD-II system operated by a new 6-speed auto gearbox (as opposed to the previous model 5-speed) which comes with four drive options, 2H, 4H, 4H with a locked centre differential and 4LLc low-ratio, also with a locked differential. The system benefits further from the vehicle’s inbuilt traction and stability control systems which simply means that even a novice off-road driver can jump into the driver’s seat, fire it up, select drive and let the machine and the electronics do the business regardless of conditions.

In addition to that, the vehicle’s off road ability has been enhanced even further with the addition of an ‘Off-Road Mode’ and Hill Descent Control (HDC). Both are operated via switches next to the 4WD dial selector and take all the guesswork and anxiety out of difficult conditions.

Any time spent outside the 5 seater, leather clad cabin during the day was kept to a minimum as the insidious damp cold air tried to seep through the layers of Pringle wool and M&S finery. It also made the heated steering wheel more welcome back inside.

This being the upmarket Barbarian X version the truck came equipped with all the electronic aids that one would expect in a modern car these days, but perhaps not a working pickup. In addition to the sensors and cameras, Auto Stop & Go and Smartphone links, it has Forward Collision Mitigation, Blind Spot Warning, Lane Change Assist, Rear Cross Traffic Alert Ultrasonic Mis-acceleration mitigation systems.

On a more practical level, Mitsubishi has addressed the heavy tailgate issue. Pickup tailgates are usually heavy. It’s a fact of working life. They have to be because of their load bearing function but Mitsubishi have introduced a damper and spring system to greatly ease lowering and lifting. Even the weans could do it – if they could reach!

So despite all the electronic aids, softer suspension and practical additions, the L200 is still at heart a working truck. It can pull up to 3500 kgs while the loadbed payload maxes out at 1075 kgs. In fact the GTW is an impressive 6150 kgs – it can pull a fully loaded trailer and still have capacity for up to 625 kgs in the loadbed.

On that basis this really is a work, rest and play truck. The £32,200 test vehicle had what I would consider an essential bed-liner at an extra £210 while the Sunflare Orange paint finish added a further £475. That raised the price to £33,000 – and then the VAT has to be added! But it’s still cheaper than a family car AND a work truck! 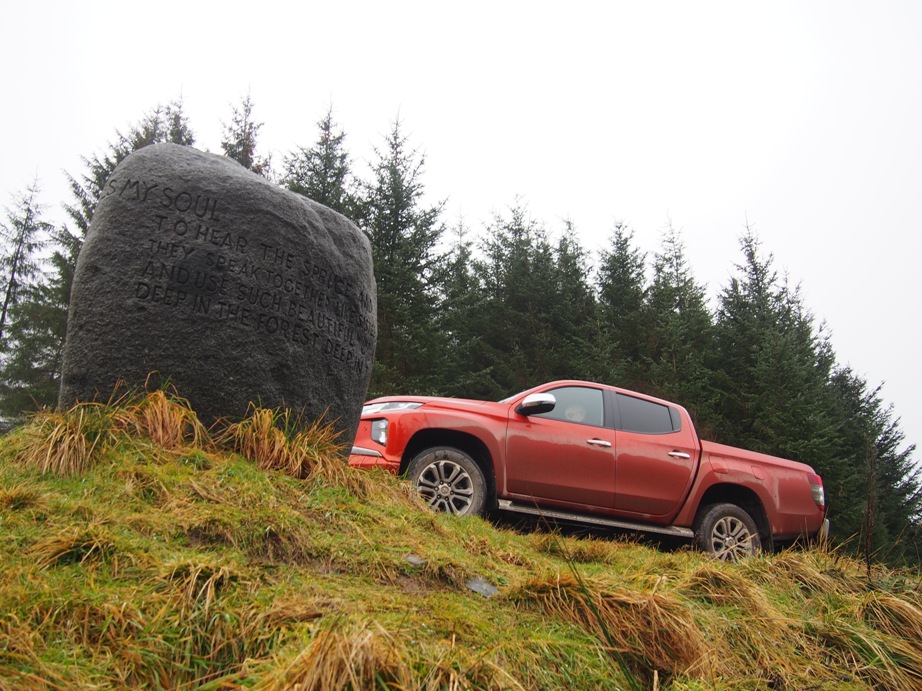 The ‘Talking Head Stane’ is one of the ‘7 Stanes’ which feature across the Scottish border territory. The inscription comes from a Norwegian poem about spruce trees entitled ‘Deep in the Forest’ by Hans Børli:
“But still it satisfies my soul to hear the spruce and wind. They speak together like sister and brother, and use such beautiful wind-wild words deep in the forest, deep in the forest.”