I’ve got a mate (surprised, eh?) who has a garage. Last year he bought a Ford Ranger to tow his car trailer. He needed something that could legally tow up to 3.5 tonnes. So he bought a pickup. He got rid of it after three months. Apparently it was too uncomfortable for his tender behind. And the moral of this tale? A pick-up is not for everybody.

If you want comfort and towing capacity then go for a big SUV or a large van, but if you want something that will take additional abuse, go anywhere and take 3.5 tonnes with it, then a pickup is the obvious choice.

With that in mind, the suspension will have to be able to cope, so don’t go expecting something soft and fluffy. Pickups are built to carry and built to tow. Compromises have to be made.

Having said that had my mate tried the latest Ford Ranger Wildtrak then he might just have been converted.

Even without a bit of weight in the back (a trick often employed by regular pickup users) this latest version rides as well as an entry level large SUV and is half the price of an air suspended luxury barge.

The new Wildtrak goes a step or two further. It’s got a proper handbrake and a ‘fun’ button. None of this fancy electronic push button handbrake business, a proper lever that’s tactile, effective and easy to maintain. As for the ‘fun’ button, that’s not an actual Ford term! The 10 speed automatic ‘box has a button on the side of the knob which allows manual clutchless up and down changes.

There is absolutely no need to use this over-ride function. The auto ‘box manages daily tasks effortlessly and makes a better job of tackling extreme off-road trips better than most regular drivers. But for those of us who hanker after the good old days of simply enjoying mechanical functions for the sake of it, the ‘fun’ button does add a little extra enjoyment.

What the manual change offers is a little more personal control over the performance. In a machine weighing around 2.3 tonnes, everything is relative. There’s no overboost function or nitrous injection hidden under the seats, so there’s no neck snapping acceleration or licence losing top speeds, but using the manual change to manage the power does make a difference. It’s also worth noting that when shod with a set of 265/60×18 Continental CrossContact M&S tyres the back end can become a mite skittish especially on wet roads, and more especially when there is no weight in the back. That also adds to the ‘fun’ factor, but be careful.

So don’t go thinking this is a ‘Sports Plus’ mode, because the 2 litre diesel turbo is not the biggest Mars bar in the box. However, with 210 bhp in its belly, the beast will get off its mark from rest and hit 60 mph in under 10 seconds. And just on the off chance that you might like to see what the inside of Barlinnie looks like, it will top out at 112 mph. The trouble is, if you use that performance the fuel consumption will drop below 30 mpg, well below.

It’s off road credentials are every bit as impressive. Running in standard mode with rear wheel drive only, the four wheel drive system can be engaged on the move and offers both High and Low ratios with Roll Stability Control, Traction Control and an electronic locking rear differential. Ground clearance is 232mm (9 inches) and it also has a wading depth of 800mm (31.5 inches) and of course it passes the dead sheep test – provide you can heft it up on to the high tailgate and slide it in!

It’s not just the suspension and on-road ride quality that has been civilised, the interior is more than a match for any luxury motor car, there are steps into the cab for the short and dainty and the tailgate is spring loaded. That in itself is a big improvement. It used to be a heavy old slab of ironwork and whilst it retains its solidity to safely contain a one tonne payload in the load bed, the tailgate can be raised or lowered by most folks, even if they left home at the start of a working day without their Weetabix.

Having said that, the loadlfoor height is some 835mm (32 inches) from the ground while the pickup wall itself is a further 511mm (20 inches) so a forklift might be needed for the weekly shop if you want to heave it over the top which stands some 4 feet 4 inches above ground level. On the other hand it’s a good vantage point if attending an outdoor event like a rally or Point to Point. Just stick a couple of camping chairs in the back complete with coolbox and sandwiches.

Double cab Rangers start from around £30,000 but the Wildtrak is loaded up with over ten grandsworth of extras taking the price to just over £40,000. That enhances the exterior appeal with a Sea Grey paint job, matching details and 18 inch alloys. Inside the cab, the leather trimmed powered and heated seats and steering wheel complete the luxury look with a dashboard containing an 8 inch TFT touchscreen with DAB Radio/CD and all the ancillary controls you would expect in an executive saloon.

This is a well designed and equipped work, leisure and domestic truck with a split personality – it still thinks it’s a sports car!

I just love the big rascal to bits. 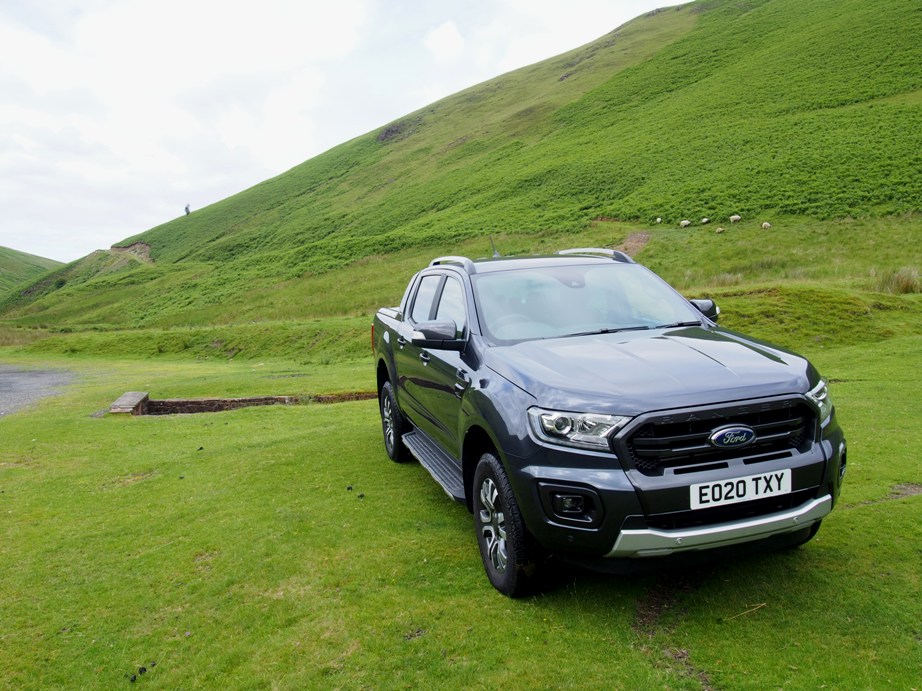