Mitsubishi have been building ‘Jeeps’ since the mid 1950s and other small utility vehicles since the mid 1960s, but the first recognisable pickup didn’t appear until the late 70s. These were pretty basic 1.6 litre 2WD and 4WD machines which were built for one purpose, carrying people and their stuff to and from work. Mind you the company did spot an opportunity to widen the market and they actually produced a ‘leisure’ spec vehicle. It wasn’t any more comfortable, but it had fewer ‘commercial’ ancillaries, so on that basis it wasn’t as functional as the regular work truck.

However, it must have sparked an idea because ever since then, every succeeding model pickup has become more attractive to the leisure market while still retaining its rugged appeal and capacity for hard work.

Which brings us to the latest sixth generation Mitsubishi L200 pickup. And as an indication of where the market is going, there is no entry level single cab with the longer truck bed any more. It has given way to an altogether more sophisticated machine with the ‘lifestyle’ sector firmly in its sights, while still retaining and improving on its capacity for hard work and mountain goat ability to get folks where they want to work, rest or play.

Think of it more as an upmarket SUV with an open boot, although there are still strong links with the past and its former primary function. The pickup has semi-elliptic springs at the rear which means it still does ride a bit more firmly than a luxury SUV, although bumps and shocks have been considerably reduced through superior damping, better insulation and more comfortable seats.

What that means is that this pickup can carry a full one tonne load in its truck bed, in fact the payload capacity has increased from 1045 kgs to 1080 kgs. It can also tow a three and a half tonne trailer. That puts it right at the head of the pickup field. To put it another way, this 2.3 litre 4 wheel drive machine has a Gross Train Weight of just over 6 tonnes, 6,155 kgs to be exact – that equates to carrying five people, a quarter of a tonne of ‘stuff’ in the truck bed while towing a fully loaded trailer weighing 3.5 tonnes.

The 150hp engine generates 400 Nm of torque at 2000rpm, so getting such a load underway from rest and cruising at legal speeds on the nation’s highways and byways is accomplished without any fuss. Just don’t expect racing starts and licence losing top speeds.

Which then begged the question, why did Mitsubishi choose Knockhill Race Circuit – Scotland’s national motorsport centre! – to present this latest machine to the nation’s motoring press? Simples, as a rodent might say, because it has everything on-site, including catering facilities. A ‘handling course’ had been set using the regular ‘rally stage’ section on the hill-side, an autotest on the loose and another ‘autotest’ while towing a loaded trailer. In addition there were a couple of wee reversing, with and without trailer, tests. Mind you, one colleague had the temerity to protest another colleague’s prowess at reversing trailers, simply because he wrote for commercial vehicle magazines, and therefore had an advantage over the rest. I wonder who that could have been, eh?

There was an on-road route as well, but I went off-piste to visit the nearby Bus Museum, where the latest L200’s road manners could be assessed. Yes, it still bumps and bounces, but not as bad as before and that was with an empty loadbed, so it might not appeal to those of a sensitive disposition and a tender behind. But for the vast majority of ordinary folks it will be more than perfectly acceptable especially to those who require its capacity for hard work whether towing plant trailers or caravans, boats or covered car trailers, or perhaps even carrying surfboards across soft sand and climbing gear to the mountains.

The test vehicles were also allowed access to Knockhill’s compact 4×4 circuit in and around the rocks and gullies beside and through the Black Devon Water which runs through the site on the right of the access road as you turn into the circuit. What that proved was that the increased level of sophistication within this machine has not detracted from its impressive physical off-road abilities. Naturally it came with all the modern electronic aids to ensure that neither rock-step, deep water or boggy swamp could dissuade it from making progress as it still had its low-range ‘box and diff-lock should more extreme conditions require. A most impressive all round machine indeed.

Although the single cab utility truck has now gone, Mitsubishi has retained the Club Cab 4 seater version which comes with a slightly longer loadbed at 1850mm compared to the Double Cab which offers room for five occupants and a shorter loadbed at 1520mm although both versions can be effectively lengthened by lowering the tailgate!

Prices start from £21,515 and go up to just over £32,000, but remember this is classed as a Light Goods Vehicle (LGV) and therefore VAT has to be added, but if you’re business registered than you can get that back. 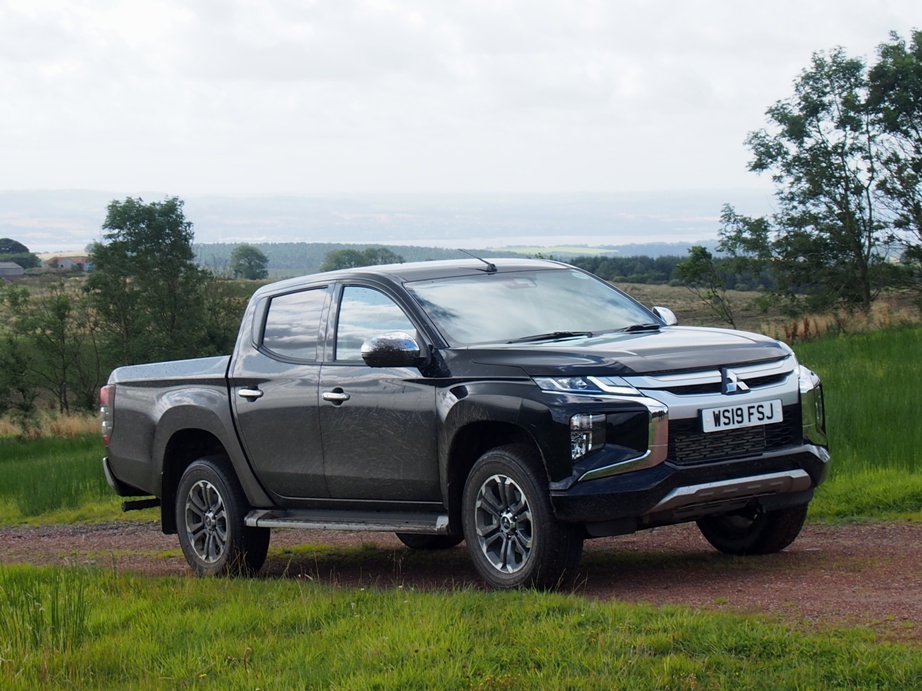