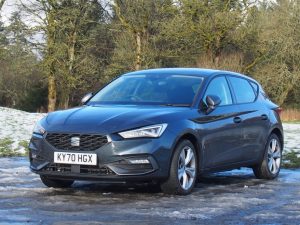 There is just one tiny wee problem with the Seat Leon FR PHEV. If Seat were serious about fuel economy, they wouldn’t make this car so much fun to drive. It’s not the quickest warm hatch around, but the petrol electric drivetrain does give it a bit more zest than the standard 1.4 TSI engine.

This same drivetrain also offers a different style of entertainment than the flat out and furious. It makes the job of re-charging the batteries on the move a bit of fun. The idea being to drive without having to use the footbrake. That means judging the approach speed and distance to corners, roundabouts and junctions, lifting off the gas and using the engine cut-out and recharging to slow the car down to the required speed or full stop.

Getting it right is the fun because you can lift off too soon which means you have to speed up again or lift off too late and then you do have to use the brake. As I said entertaining in a different way.

Otherwise everything feels pretty normal. The six speed DSG gearbox is pretty smooth and more responsive than some other automatics around which helps with the nought to 60 mph sprint, taking under 8 seconds. But it’s the mid range oomph that really impresses. A quick prod on the accelerator when overtaking brings petrol and electric motors together to give a real shove in the back to get the manoeuvre done quickly and safely.

For a bit more driver engagement, the S-mode allows the driver to choose gears while a pair of paddle shifters behind the wheel adds further control. 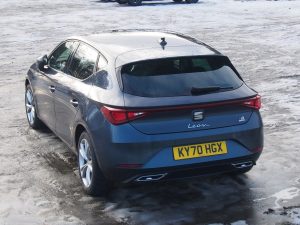 With a rechargeable battery pack on board, the car is a good bit heavier than the standard Leon, over 340 kgs in fact, but the multi-link rear suspension with Dynamic Chassis Control easily copes. There is one wee drawback here, the Leon boot is not the biggest in its class and with a battery pack installed, it’s even less practical.

Ride quality is good, no doubt partly due to the sensible 17 inch rims as opposed to the more ‘fashionable’ 18s and 19s so favoured by hot hatch owners. I also liked the 225/45 Goodyear Eagle rubber which added to the comfort levels while providing a decent amount of grip in all weather conditions.

At times it feels as though the car has more than the stated 201 bhp, but that’s because it can spin its front wheels on electric power from start up if you are not careful. Seat reckon you should get around 40 miles of electrical motoring before the battery needs charged but that all depends on how it is driven. The on board fuel consumption indicator can raise eyebrows at times, especially when it claims that the car is achieving over 200 miles to the gallon!

That figure, or close to it, can certainly be achieved by some folks on the regular commuter run, although certainly not by sales reps flogging their wares up and down the country and using motorways and ‘A’ roads all the time. 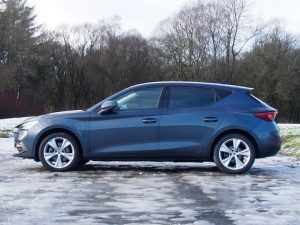 The trick here is keep your journeys short and charge it up every time you return home or when you arrive at work. That way much of the driving can be done under electric power alone and only using the petrol engine for longer trips.

Inside the car the decor is dark, plain and yet stylish with a 10.25-inch digital driver binnacle behind the steering wheel and a 10 inch infotainment screen in the middle of the dashboard. There is however a distinct lack of buttons with most controls managed by menus and options. Not ideal when getting used to a new car and trying to stab the required ’emoji’ while on the move.

However, Seat have thought of this and have incorporated Voice Control for most of the functions. The only trouble is you have to be very precise and discard your broad Glasgow accent for a more ‘BBC-ish’ attempt. In other words, to assure his mental health, Billy Connolly would have to use a bus replacement service if he had a Seat!

I really like the Leon hybrid, but given my current life style, it’s not for me. And that’s where punters will have to make their own decisions. How often do they drive and how far? That will determine whether it’s suitable or not, and it’s the same for all hybrids, not just the Seat. 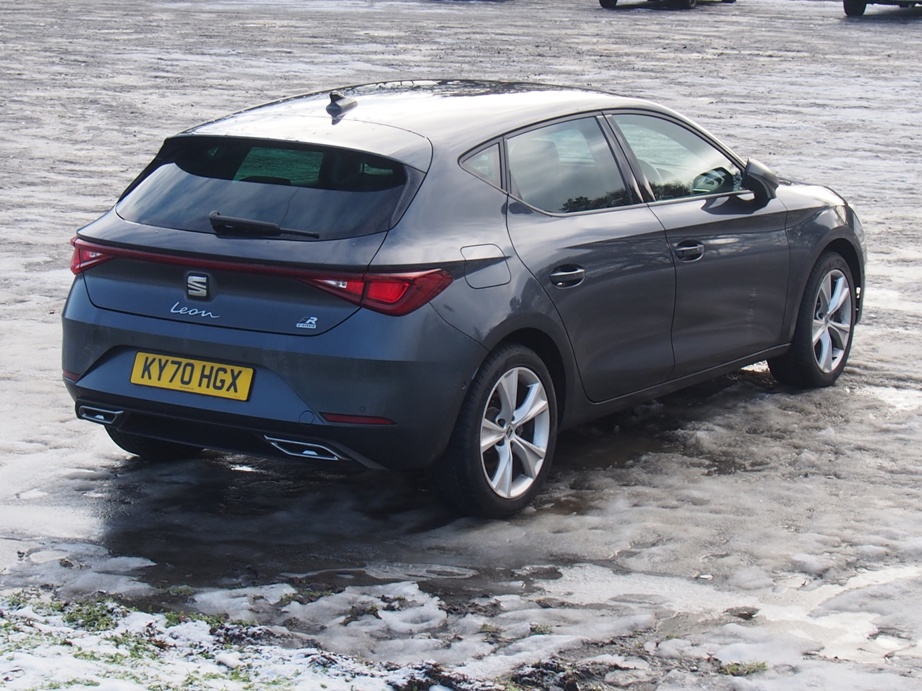