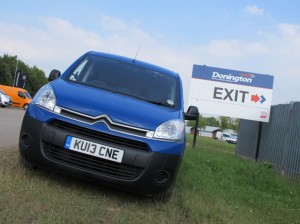 Automated and automatic gearboxes are now pretty much standard equipment on new trucks, but still a rarity on new vans. And whilst truck drivers were initially sceptic about their introduction, they have wholeheartedly endorsed their use now, as it makes the job much easier and less stressful.

On the other hand, van drivers are still very much resistant to the idea. So having previously driven the manual version of Citroen’s compact Berlingo van, will the introduction of the same van with an automated six-speed shift convert the doubters? On this showing, not quite.

The French designers have made a decent job of accommodation in what is a compact van. It’s wider and taller than the original Berlingo so it looks much bigger than it actually is, but they have managed to create a three-seater cab, although the middle seat will be better suited to one of L S Lowry’s wee men than a standard sized British workman who needs a 9 item fry-up every morning before starting the day’s toil.

There are plenty of cubby holes and storage places plus door pockets, but the lack of easily accessible cup/can holders won’t suit the average tradesman. The test vehicle had the ‘Extenso’ fold-flat passenger seat option (standard on the Airdream package), but that still left a narrow seat with fold down back rest/desktop in the middle. The optional sliding side door is very narrow, but it is especially handy when packing in longer goods using the fold-flat front passenger seat. This is where the middle seat comes in especially handy, allowing two blokes plus 3 metre lengths of piping or timber to be carried inside the van.

The automated six speed gearbox also creates much more room in the front with no need for a knee-nudging gearlever housing, instead a dial on the dashboard selects Neutral, Drive and Reverse. 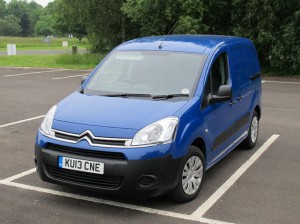 The 1560cc four cylinder Euro-5 turbo diesel produces a modest 89 hp, but manages to feel quite sprightly. As for the six speed gearbox, it really excels in slow moving traffic, where the gearchanges are less noticeable. However, the Auto Stop/Start system as fitted to the Berlingo can be just a bit too eager. At times it cuts the engine out on the approach to roundabouts and junctions just when you want to accelerate to join the flow of traffic, only to find that the gearbox is still making up its mind which gear it should be in. By the time it does, the gap has gone. Better to switch off the system in such conditions and keep it for congested rather than fast moving traffic conditions.

The independent front strut suspension and independent rear with trailing arms are pretty competent whether running light or loaded, but the biggest issue is the hesitant and slow automated gearchange which can cause the van to pitch forwards and backwards. The trick here is to anticipate each upward or downward shift and just lift off the gas a little each time. It doesn’t stop the motion altogether, but it makes it less noticeable. However, it will stop folk trying to cut across country at speed.

Even with the EGS6 six speed auto box, Citroen still reports a Combined cycle fuel consumption figure of 62.8 mpg. In the manual version tested last year, actual consumption was 57 mpg and this latest one proved to be very similar. The only difference being reduced stress levels when inching along in heavy traffic and not having to change gear and use the clutch pedal every few seconds. The 12,500 mile service intervals are highlighted on the on-board Maintenance Indicator on the dash display. 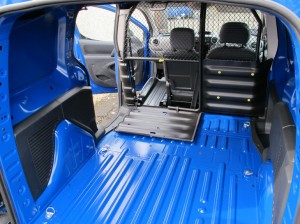 The Berlingo has a 1620 mm floor width at its widest point and 1250 mm from the floor to the roof while the floor length is 1800 mm, but this can be extended to a full 3 metres. The ‘Extenso’ passenger seat folds flush with the floor almost doubling the floor length. Payload is 625 kgs and the two part bulkhead has a folding steel lower half and mesh upper to accommodate the Extenso seat, and there’s a 12v socket in the rear.

All round ABS/EBD disc brakes are a standard fitting on Berlingo, but the Airdream spec. adds ESP (Electronic Stability Programme), Traction Control and Hill Start Assist. Driver and passenger airbags are complemented by front lateral airbags. The electrically operated door mirrors are also heated and Trackstar stolen vehicle tracking is also built in to the TrafficMaster system.

The majority of Citroen LCVs now have TrafficMaster guidance systems as standard, the latest versions of which now have a full colour screen. This can be upgraded to full Telematics and Fleet Management functionality. In basic trim, the Berlingo is good value at £11,845, but it’s worth paying the extra £1620 for Citroën’s LX and Airdream package, while the 6 speed auto box adds another £550 to the price. The Airdream spec. also includes remote central locking, electric windows, a more adjustable driver’s seat with drawer underneath plus plastic wheel covers.

Although the Berlingo is a cracking wee van, the auto ‘box will not be to everyone’s taste. However, there’s no doubt that when traffic is busy and just crawling along, it can lead to strain and stress-free driving. It’s another option for what is already an excellent and well equipped modest sized load carrier, just drive it first and see if it suits you.