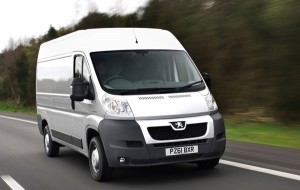 If beauty is in the eyes of the beholder, then the beholder of the Peugeot Boxer will need to be very open minded. Mind you when it comes to those nutty entries in the annual Turner Prize for modern art which features unmade beds, old sheds and dead dogs, then the Boxer is indeed a thing of beauty. But that’s not really the point. This is a large and practical box on wheels that has excellent road manners and a willingness to adapt to anything from load carrying to providing the basis for a mobile workshop, motorhome or ideal rally service barge.

It’s a big van so it gets a big cab with plenty of head and elbow room. The seats are wide, comfortable and as good as any other van seats in the business. The new-look dashboard with its sexy ‘piano black’ centre panel has a variety of cubby holes while the doors each have a very useful single shallow and one deep pocket. The central storage dropdown box will accommodate a laptop computer and has a built-in USB connector. 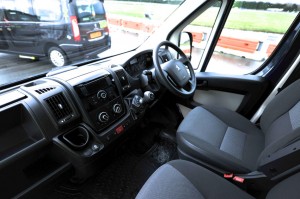 The pop-up clipboard on the top of the dash is handy for travel directions and lists, but the French just don’t do cup holders. There is only one on the dash and two in the drop down desktop in the middle seat. Not ideal if a crew of three stops for a cooked breakfast on paper plates and Styrofoam teas at the local caravan in the lay-by.

Two things I don’t like are the handbrake position and over-windscreen shelf. Unusually, the handbrake is sited on the floor between the driver’s seat and the door. That requires an awkward reach and the occasional rasp of knuckles on the door furniture. Similarly, taller drivers will have to get used to the projecting over-windscreen shelf. First time users may well graze or bump their foreheads a few times before they learn! Once you get used to these little foibles, it’s an excellent cab.

It’s a front wheel drive van, so the cab sits quite high off the deck and has a sufficiently big step to accommodate most sizes of feet and styles of entry and exit, whether you step in head first to the cab, or step up, twist and reverse into the driver’s seat. And not only are the doors quite large, they open wide which is great for getting in and out, but watch out when opening into traffic or on to pavements! And since there is no rear driven axle, the loadfloor is relatively low.

It’s also lower than many of its rivals, no doubt helped by the fact that the Boxer runs on 15 inch wheels whereas many other big vans use 16 inch rubber. The square shape means square loading doors and both the sliding side door and rear barn doors make the most of the interior space and access. This is as big a van as you can get without going down the special bodywork route, which means that at more than 2 metres wide in standard spec it is wider than most other vans of this size. I can park a Transit at the side of my house – but not a Boxer. 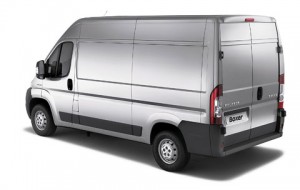 Apart from the built-in step on the rear bumper, the door handles highlight another thoughtful touch. They might look clunky and agricultural, but the upright style of each handle means it can be opened by either the left or right hand, ideal if carrying parcels and or toolboxes.

The long wheelbase and wide track of the Boxer means it is remarkably stable on the open road whether running empty or loaded and that’s also down to the independent front strut coil-sprung suspension with dual rate semi-elliptic springs at the rear. Further enhancing ride quality is the seating. They have a bit more cushion than some of those German built long distance courier specialists, which suits us soft Brits rather more than our more austere European cousins. The driving position is good too with the multi adjustable seat and steering column providing the finishing touch.

The 2.2 litre four cylinder Euro-5 turbo diesel is not the quietest engine around, but it’s well insulated from the cabin. There are three versions of this engine with 110, 130 and 150 bhp while the conversion and motorhome market has the option of a large 4-pot, 3 litre turbo diesel with 180 bhp. The test van had the 130 hp version with 320 Nm of torque and even with two rally car engines, gearboxes and sundry suspension components in the back shrugged off the extra weight with ease coming over Carter Bar on the A68 into Scotland.

Official fuel consumption figures should always be regarded with a healthy degree of scepticism, because fixed laboratory tests have little impact on real world motoring. Peugeot’s own figures claim a combined fuel consumption figure of 37.6, but I struggled to get over 30. Over a week’s mixed driving with minimal motorway work I recorded a figure of 30.2 mpg. That’s still not too bad for this size of van.