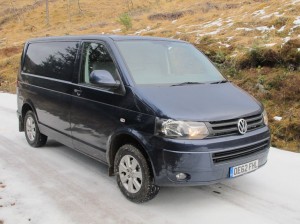 We’ve had some pretty bad spells of wintry weather over the past three years with enough snow on the ground to encourage Santa to set up camp in the north of Scotland, and cut out the return trip to Lapland all the time. Think of the air-miles he would save, not to mention the additional feed costs the reindeer would need if stabled here rather than further north.

He could also cut his costs further by employing alternative forms of transport over here, like the Volkswagen Transporter 4Motion. This would be just the job for ferrying bales of hay back and forth to the reindeer paddock and carrying raw materials and finished goods to and from the toy factory, regardless of weather conditions.

That’s because the Transporter 4Motion is basically a front wheel drive vehicle until VW’s 4Motion Haldex system recognises a loss of grip from the driving wheels. When this happens, the ECU sends drive to the rear wheels turning it into an all wheel drive terrain conquerer. 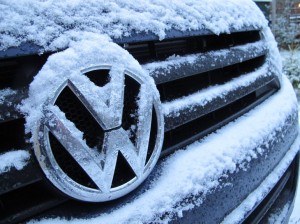 Most times the driver will be unaware of what is happening under his feet and pedals because it is only in extreme conditions that the loss of cornering and braking will be detected. Even then, the system pre-empts the driver and applies its own required degree of control automatically.

This latest Haldex 4 version of the 4MOTION system works faster, is more sensitive and quieter, than the previous mechanically controlled ‘Haldex2’ module. However, the system can be provoked to prove it is working – and give a bit of added driver confidence!

Standing starts on slippery slopes will generate front wheel slip till the system catches up, and it’s the same with braking suddenly on slippery surfaces. Initially the front wheels can be felt to lockup before the rears come into play and braking distances are dramatically shortened – safely!

In normal driving 90 per cent of the engine’s power is delivered to the front wheels, with 10 per cent going to the rear. This means that under normal driving, the driver will be unaware of the electronic brain working away under the bonnet apportioning drive to the wheels as it sees fit. And with a less theatrical attack on the accelerator pedal, setting off on an icy slope is a seriously drama-free event.

Away from the winter snows, it can also cope with wet grass and muddy conditions making it a truly all round working vehicle, but the big advantage here is that it becomes a 4WD machine only when needed. That means it offers the frugality of a FWD vehicle most of the time. And with Volkswagen’s latest generation of 2 litre turbo diesels that should offer around 35 mpg. 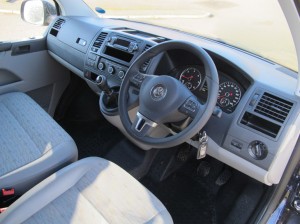 The 4MOTION system adds approximately 100 kg to the GVW of the Transporter so that could have an impact on those who need to utilise the full 1200 kg payload. It also adds around £2600 to the cost of a basic T30 SWB van and it’s good for towing a trailer up to 2500 kgs in weight.

And if you need any more persuading, the seats have a new foam cushion filling which offers a bit more posterior comfort, especially if bumping over some forestry road ruts. Truly a van for all seasons – and conditions.