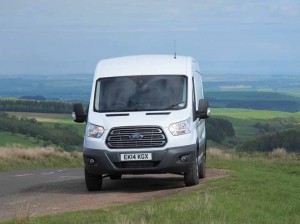 I’m not the biggest fan of the new face of the Ford Transit. Compared to the Courier, Connect and Custom, it’s not the prettiest kid in the family portrait. That’s obviously a personal view, but it is one shared by many colleagues and other van drivers. Those nice people at Ford Commercial Vehicles assured me the looks would grow on me. They haven’t. But here’s another admission. As a van, the more I drove it, the more I liked it.

Six months ago, when I drove the van home from the UK launch in Twickenham (Englandshire) it had just over 600 miles on the odometer. On the run back from Rally Wales GB to Castle Bunnet, the odometer clicked over 8,000 miles.

Driving the van back to base from the press launch, the Transit was recording a fuel consumption figure of 29mpg, but calculations at the weekend showed that it is now returning 31.9mpg and I reckon by the time it gets to 10,000 miles it should be well over 32mpg. That’s pretty good for a big van, and maybe those doubtful looks disguise a much more aerodynamic and fuel efficient frontage! 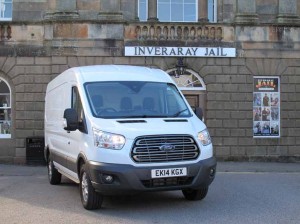 These are pretty accurate fuel consumption figures since the van has been driven on all types of road. It has dodged the locals on the single track roads of Mull and cruised the truck and caravan congested A9, sometimes fully loaded and sometimes empty, but most usually with around 400kgs in the back. This was real world motoring as opposed to EEC laboratory test figures and all the more impressive for that.

The engine is freeing up nicely now. Previous experience of Ford diesels suggests that they need 10,000 miles to really ‘bed in’. For instance, two weekends ago, on a short, steep overtaking uphill lane heading north on the A68 coming home from the Cheviot I overtook a touring coach which was carrying quite a head of steam up the incline. I wouldn’t have attempted this manoeuvre a few months back, but with the engine freeing up nicely the Transit sailed past the coach. It’s no sports car, but the 2.2 litre, 125PS (123bhp) engine is quite responsive if you make good use of the 6 speed gearbox.

The other big difference in the new Euro-5 engine is how quiet it is. It still emits the traditional, and comforting, ‘diesel rattle’ on start up in the morning but once operating temperature has been reached, it is whisper quiet on all but the steepest, hard working hills.

Inside the cab, I miss the fold-down desk-top tray on the dash from the previous model, but there’s no doubt that huge improvements have been made. The new layout still retains the 1 litre bottle holsters at each end of the dash plus can holders on top and a fold down cup holder in the middle. There is also a new desk-top, fold down tray in the centre seat back. Storage has also been improved with a box under the dual passenger seat and there is an overhead shelf. Just don’t put any glossy brochures above your head though. They slide out just as easily as they slide in! 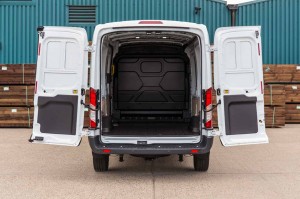 Another advantage of the new design shape, is increased headroom and shoulder room in the cab. The previous Transit was always limited by the fact that the base model height had to be able to access multi-storey and underground car parks. This design meant that headroom was restricted even in the hi-roof models. With no need to compromise in new Transit that claustrophobic feeling has been removed. This is a nice place to sit and work.

Initial reservations about the new low profile seat cushions are not as bad as first feared. The seats are pretty comfortable and well shaped for longer trips, but on a personal basis, not quite as cosseting as the previous model seats.

However the main point about buying a van is the loadspace. What you get is a good square 10.2cu.m loadbox with just about sufficient headroom in the H2 version for a six footer to walk around in the back. There is no overhead shelf above the cab which was handy in the past for storing anoraks and boots. The robust floor covering has a 4inch lip all the way round so if you spill something it can be contained and it is also handy for washing the floor with a bucket and brush.

There are 10 large load lashing rings at floor level, but none on the sidewalls. However, the rings are big enough for the hooks on hefty sized ratchet straps unlike some other vans. Ideal for securing motor bikes or bulk loads up to 1364kgs in this configuration. 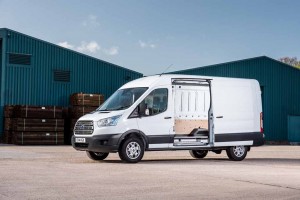 The best bit is the LED lighting, although this is a 90 quid option. Four units provide sufficient illumination to read the latest ‘Motorsport News’ inside at night with all the doors closed. That impressed me. I originally thought this an expensive option, but it will greatly benefit those ferreting about in the back of a service van looking for spare wheel nuts. On the other hand, if you just want to hide from your mates (or the wife) and read the paper, this is an absolute essential.

Another option well worth having is the built in 230v inverter. It’s not very easy to get at, mounted on the floor between the seats, but for re-charging laptops, running printers or any other 3 pin plug device, it is well worth the 72 quid. The only drawback is, it needs to have the engine running to operate.

Visibility from the cab is excellent with one long and one short wiper providing an excellent sweep of the large windscreen and the large door mirrors with superbly designed mirror lenses are just about the best in the business for reversing. Having said that, this test vehicle had the rear view camera option fitted. Ideal for congested service parks! 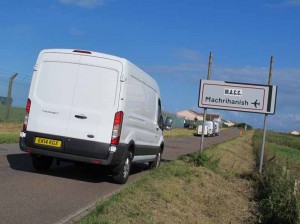 Considering this is just a box on wheels, prices are pretty steep, but that can be said of all light commercial vehicles these days, although there are deals to be done at dealer level. With the Turkish factory production lines now running at near capacity there is plenty of product in stock at all the dealers with more boatloads on their way. So don’t just accept the first price offered.

After 6 months and 8000 miles what’s the verdict? Ford claims the Transit is the backbone of Britain and for 49 years now it has indeed been the working nation’s favourite. Next year Ford will celebrate a pretty unique anniversary and there’s no reason to doubt that the Transit will still be on top. It drives extremely well, it’s comfortable and has excellent payload potential. I just wish it looked a bit more Daniel Craig and less Graham Norton.