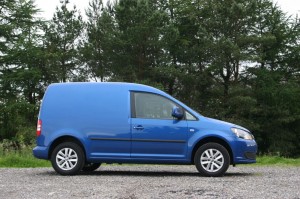 I spent some quality time in Volkswagen’s Bluemotion ‘eco-friendly’ Caddy van recently and found that ‘Bluemotion’ is more than just a label, it really does make a noticeable difference.

In the eyes of the great British public, there’s a great deal of scepticism out there about the claims being made by some motor manufacturers regarding fuel consumption figures and their attempts to come up with more frugal and ‘eco-friendly’ versions of current models.

Everyone is at it, but because internal combustion engine technology has reached such a state of refinement there is little possibility of any radical innovations here, hence the expenditure on gas, electricity, hydrogen and a variety of hybrid experiments. That’s why the search is on for reduced friction motor oil, lower rolling resistance tyres, more aerodynamic tweaks, taller gearing, Stop/Start systems, energy recovery functions and optimised engine management settings for specific commercial use. And yes I know they each have only a minimal impact on fuel economy, but taken together, savings can be significant and measurable.

The trouble is, all we have to go on are the Government laboratory figures on fuel consumption. As long as you don’t expect to replicate these figures on the open road, then you won’t be disappointed. These figures are only useful for comparison purposes with other manufacturers and models. But there are sceptics here as well, with some folks believing that manufacturers are deliberately engineering vehicles to get good figures for marketing purposes at the expense of real-world use.

I find this very hard to believe as any such manufacturer would soon be found out when the fleet buyers find that such exaggerated claims are not matched by performance!
We all have to realistic view of these figures and use them only in context.
On that basis, I had a run out recently in a 1.6 litre Volkswagen Caddy Bluemotion. Over the course of three days I covered nearly 1,000 miles (well, 875.6 to be exact) on everything from single track roads to Motorways and at no time did the fuel consumption fall below an average of 50 mpg. 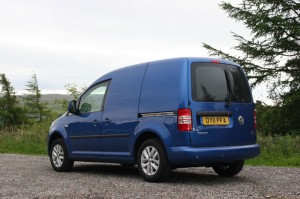 This was the 102 PS (100 bhp) version with the 5 speed gearbox. And why not a six speeder? Because that’s not what this van is about, it is more of an urban runabout than a high mileage, highway marauder.

And yet, the first run I took it was down to Warwick and back from central Scotland. On that 525 mile round trip, the Caddy averaged 53 mpg. It could easily have been a lot better than that, but the wee rascal was perfectly happy to run at 70 mph (and would have been equally happy at 80 had I wanted to!) so who was I to hold it back? Besides, there was work to be done in Warwick so I didn’t want to dawdle.

On my return home I immediately headed north to Aberdeen where it is dangerous to exceed 60 mph – only because of the profusion of cameras and camera vans on the A90 and bluidy great tractors which cross the main road in this agriculturally fertile region! 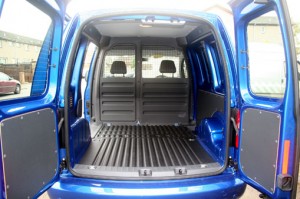 And just for a change, on the return home I headed south via Banchory and over the notorious Cairn O’Mount road with its vertigo inspiring climbs and hair raising descents. Considering how hard the wee motor had to work (admittedly with only 200 kgs in the back) I was surprised to record 51.54 mpg on the 250 mile round trip.
Although the gearbox had to be used to get the best out of it on the Cairn O’Mount climbs, the 1.6 litre engine was more than up to the task, so there was little concession to the Bluemotion technology in real terms.

The remainder of the mileage was tootling around locally and with a little bit of concentration I was easily exceeding 60 mpg.

The only drawback is that the Bluemotion version of the Caddy is 400 quid dearer (+ VAT) than the ‘standard’ one, but depending on use and how it is driven that figure can easily be recouped well inside the first year of use.