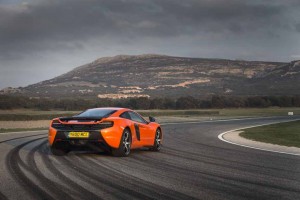 You know that scene in Star Trek? The one where Captain Kirk shouts down the speaking tube to Scotty and tells him to “engage warp factor 5”? The instant Scotty flicks the switch, the pin pricks of stars and planets outside the windows suddenly stream backwards in long shafts of coloured lights as the Enterprise rockets into the unknown. That’s the McLaren 650S. Only it does it with hedgerows and telegraph poles.

The ‘650’ in the nameplate comes from the 650PS generated by the twin turbo V8. Actually it’s ‘only’ 641 bhp, but I suppose 650 sounds better and rolls off the tongue more easily. Besides, we’re in Europe now, and they like their PSs and KPHs and Kgs and Euros as opposed to real measurements and money.

But anyone buying a 641bhp McLaren 650s certainly won’t feel short changed. On second thoughts, they might, when they first clamber aboard. There is no gearstick. Not even a stump. Nor a joystick, just buttons – oh, and a pair of paddles behind the steering wheel. Aye, ‘beam me up Scotty’ richt enough.

Seriously this is minimalist design. You only get what you need and that starts with the steering wheel. No multi-function nonsense here. Which is maybe a good thing, because once you’ve grabbed it and are hanging on, you won’t want to be taking a hand off – for anything. 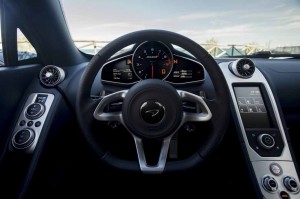 More importantly, there are two knurled knobs below the engine Start/Stop button and both are marked N, S and T, which stands for Normal, Sport and Track. These adjust the aero package and chassis, ride height and engine response. Three more buttons are marked Active, Winter and Launch while the handbrake is a finger-tip lever which controls its electronic application. The final three buttons low down on the central console are more straightforward. They act as the gearstick! The ‘D’ button engages the automatic 7 speed twin clutch gearbox, ‘N’ is for Neutral and ‘R’ is for Reverse. Simples! 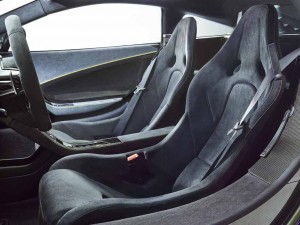 As for creature comforts. Forget it. There aren’t even any cushions or padding in the seats, just an alcantara wrapped bucket that hugs you like a skinny supermodel after your wallet. You can feel her bones through the skimpy material, and are aware of your own at the same time. Funnily enough, although the seats are non-adjustable (although they do slide back and forwards) they are remarkably comfortable. I suppose that’s ergonomics for you. There is a radio too, but no matter what you do with it, the volume is overwhelmed by the loud pedal on the floor.

Which brings me to the second best bit. Pressing the start button. Naturally, this being a thoroughly modern sports car it starts with a ‘whump’ before settling into an idle which is the aural equivalent of a distant jam session with Status Quo, Queen and AC/DC.

Dead ahead is the rev counter (red lined at 8500) with a pitifully small digital readout for the speedo and another digital indicator for gears. A couple of short dabs on the accelerator flick the needle round the dial and remind you that the engine is behind you. Awfully bluidy close behind you.

Then, one flick of the right hand paddle and the numeral ‘1’ comes up in the digital display. Slight pressure on the accelerator and you’re off. No drama no fuss, like finger tips sliding down satin. Smooth as you like.

And that’s the weird thing about this car. It can be driven as slowly and smoothly as a Range Rover in LoRatio over a carpet of daisies. It’s also got suspension. Real suspension. None of this stuff made from billets of steel with springs like coiled girders. The dampers and springs provide a firm, but cushioned ride although there is no ‘dive’ under braking or ‘rise’ under acceleration. Neither is there any ‘roll’, all you feel are the g-forces. And that’s down to the McLaren ProActive Chassis Control (PCC) system with active damping. 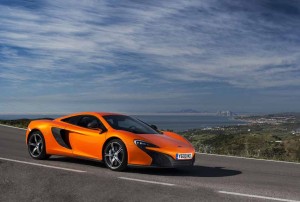 At no time did the steering feel too light or too quick, it is perfectly weighted whether going for a hairpin or a fast curve. The other thing that you notice pretty quickly is that the brake pedal is directly in line with the steering column and the accelerator to the right. That means you can brake with either foot, but that wasn’t for the likes of me on the public road!

And that was the only limiting factor when driving the car. The public road, and national speed limits. It will ride over speed bumps and shrug off pot holes with the best of them, and yet one prod of the right hand pedal and Dr Jekyll turns into hairy Mr Hyde. Seriously, the 3 second Nought to 60 time and 8.6 second dash to 124 mph do nothing to expose the sheer ferocity and speed of this thing. And yet it remains totally civilised and under control. It’s only when you realise that the speed-blur rushing past is not fence posts, but telegraph poles, that you suddenly think, “Holy sh …”

But here’s the thing. You can’t swear in this car. By the time you start uttering the chosen expletive you don’t have time to finish it, because you are already hitting ‘licence losing and locking-up/throwaway the key’ speeds and have to back out of it and get on the brakes. Neither are the brakes snatchy or heavy. The lightest of prods and the speed starts shedding as gently as you like or as viciously as you need. The carbon ceramic discs and the air-brake do the job without fuss or drama while the 19 inch by 8.5 inch Pirellis at the front and 11 inch wide 20s at the rear hang on to the tarmac like a famished football fan to the last pie on the terrace. And a word of advice, if you do want to practice emergency stops from high speeds, don’t have a greasy breakfast – it will make an awfy mess of the leather dashtop!

It’s not just a straight line rocket, the McLaren corners like Scalextrix and stops like buffers, while providing a surprisingly comfortable quality of ride even with its firm, form-hugging seats. Most of all this is a driver’s car that could be driven by your auntie. That’s also because, despite its low-down looks and wide sills, it is easy to slip into and climb out of, although it might not look too elegant either way as auntie’s M&S bloomers get an airing!

Attractive and desirable though this car is in basic form, the test car had £60,000 worth of extras. Mostly unnecessary, but still highly desirable, extras like exposed carbon fibre fittings and trim, but there was nearly 5 grandsworth of ‘sports exhaust’. If nothing has convinced you already this is a car that has been designed, engineered and built by pernickety and precise enthusiasts then the exhaust system will. In ‘Sport’ mode the V8 employs ‘cylinder cut’ technology “which produces an exhaust flare on upshifts”.

According to McLaren: “This is achieved by momentarily interrupting the spark and ‘popping’ the fuel on re-ignition. This gives a distinctive engine note, as exhaust sound is amplified, without any loss in performance.” What they don’t tell you is that it makes the drive more pleasurable and acquisition of such a beast just that little bit more desirable.

A final thought. It’s got SatNav. Never has a description been more fitting. Given the power and the speed, this thing could be chasing real satellites just like Captain Kirk. Beam me up Scotty 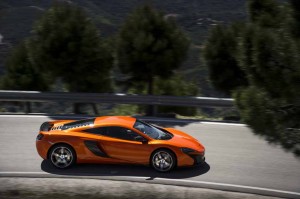 Although McLaren might argue the point, I really think this is an everyday car for the rich and ostentatious. Which is a pity, because there are many would-be customers who might just be put off by its striking looks and its petrolhead attraction factor. Maybe once they become a slightly more common sight on British roads they won’t attract rubber neckers like wasps to a picnic, but until then the shy and the modest might want to steer clear. Pity this is one of the most desirable and usable high performance sports cars – on the planet.

And that’s the only serious objection to ownership (apart from the cost), the attention it generates. From nutters in hot hatches and eedjits in 10 year old winged, dammed and skirted saloons to the genuinely curious and the (more tolerable) motoring enthusiasts. It’s a car that excites and attracts even when standing still. And if you do opt for the sports exhaust then chuck away the radio, you won’t need it. In fact I’d buy it for the noise.