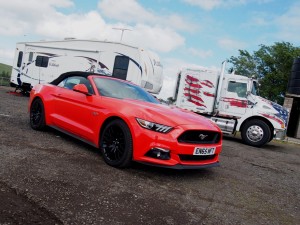 It’s certainly orange, and it’s bold, and it’s certainly big, but what is it? There are no name badges on the car at all. On its rump is a circle of chrome with the letters ‘GT’ inside it, then there is the number ‘5.0’ on the trailing edge of the front wing, while at the front on the grille is a chrome crest depicting a galloping cuddy.

But long before you notice any of these details you will have worked out exactly what it is. It really is quite unmistakable. It may have been 52 years since they first built it, and let Steve McQueen loose in it, but the stance, the lines, the kicked up tail and the grille state quite simply – Mustang.

Neither is there a ‘Ford’ badge anywhere on the outer bodywork. This is a car which has a charisma and a heritage that proclaims its presence in any company, instantly. 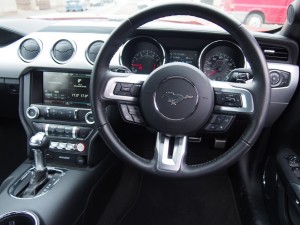 It’s wider and longer than the original car, which makes it look heavier and less athletic somehow but still undeniably a Mustang. Apart from the grille and the vertical tail-lights, there are more wistful prompts inside the car. The three spoke steering wheel has a familiar look to it and the chrome switches evoke the 70s look.

The doors are wide and the sill is low, so it’s easy to get inside – as long as you’re not parked close to another wall. Once inside there’s plenty of room for two. The front seats are wide and well shaped and yet still sportily snug and the footwells are big enough to hold luggage. So it feels good right away. 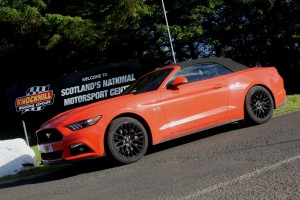 Just don’t let the rear seats fool you. This is a two-seater. If your best friends are Lego people then fine, you might be able to call it a four seater if you’re taking them back to Legoland. Nope, this is a four seater in name only, to comply with USA ‘saloon car’ laws for ‘tax efficiency’ purposes. It is not a sports car!

Then comes the biggest disappointment in the history of American muscle cars. Turn the key and fire it up. Is it running yet? The rev counter gives the game away. There’s a quad cam, 32 valve, 5 litre V8 under the bonnet, but either it’s got automotive laryngitis or an exhaust stuffed full of wire wool.

Give it a blip of throttle. Nothing. Or at least very little. There is no menacing roar, or ground shaking burble, just a distant rumble from over the horizon and far away. It doesn’t even rock from side to side on the idle. What an absolute shame.

Even when giving it the beans on the open road or track, the noise is far too civilised. More than anything else this car needs an active exhaust. At under 40 grand in basic form, and considering the hugely attractive ‘bang for buck’ ratio, another two or three thousand pounds for an active exhaust would be perfectly acceptable and instantly desirable. Otherwise owners will have to resort to their Black & Deckers. 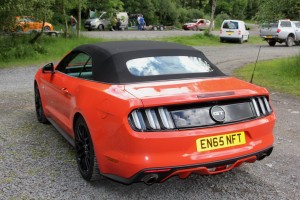 Much of that criticism can be forgiven (but not all!) when you ease it into gear and take it for a drive. It’s not a sports car, it’s a ‘GT’. It provides a warm and comforting feeling like a hot tub on a cold day.

But it’s slow. Now that’s another surprise. With 415bhp on tap it shouldn’t be slow. And therein lies it’s other trick. This is a lazy car, and for many folk that will be fine, just burbling up and down the nation’s highways and boulevards, city hotspots and holiday resorts. Corners are too strenuous to be tackled energetically, just lay back and go with the flow, reminiscing over past times when the Beach Boys, Four Seasons and Diana Ross with the Supremes were providing a certain generation’s musical soundtrack to match the muscle car multi-cylinder beat. Ahh, them were’t’days.

After a few minutes of this, the realisation sets in that you’re just dawdling along wallowing in nostalgia. This isn’t right. Why isn’t the scenery going past any faster?

The secret is, the new Mustang is a lazy old git. It would be content to rumble quietly along all day long if you let it, apart from frequent stops at filling stations, but to get the best out of it needs firm resolve and a determined right foot. That’s because the accelerator is a bit antiquarian in its reactions. Change down, floor it, and the world changes speed – almost silently. 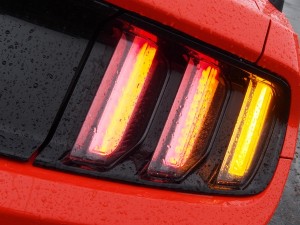 On the other hand the smoke from the rear tyres lets you know that much of the 530Nm of torque is now doing what it is supposed to be doing and the world becomes a happier and livelier place.

Long gone is the solid rear axle, to be replaced with independent front and rear suspension and a limited slip diff. That makes it handle a whole lot better, although less dramatically than the originator. Acceleration is not brutal, but too much throttle mid-corner can light up the rears and provide a botanist’s eye view of the scenery.

Oh, and did I mention filling stations? These will become a much more integral and memorable part of your life if you do a lot of mileage. 30+mpg is achievable, mid 20s good, and under 20 is all too easy if you’re enjoying yourself and playing with the ‘Launch Control’. It may be invigorating, but not for the financially faint hearted.

I just loved it, but would I have one? Not really, much as I enjoyed driving it, it attracted too much attention for those of us possessed of a more modest and private outlook on life. But really, for those who can cope with that and who will enjoy a more lethargic lifestyle with the occasional shot of automotive defibrillator, then why not? If you can manage the fuel bills, go for it. But keep some money back for an after market exhaust!

And you know what, one of the nicest little design treats is only noticeable in the dark. When you open either front door, the projection ‘puddle light’ beam is in the shape of a galloping Mustang. No, that’s not bling, that’s class. Love it.