Ford B Max, 1 litre EcoBoost … Say it with Flowers …

Anyone who doesn’t have small children or elderly relatives, especially a nippy mother-in-law and carnaptious father-in-law, won’t get the point of the Ford B Max. It’s a small car with big doors. That’s it.

If you don’t want or can’t justify a big MPV, but there is a need for a car that can carry four with ease of entry, this is it. The trouble with most small cars is small doors, so Ford’s attempt to appease those who are faced with such challenging packaging tasks is to do away with the ‘B’ pillar and fit sliding rear doors which fit snuggly and securely into the rear edge of the front doors. 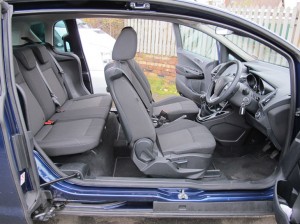 The idea works, and works well. The rear doors may be a bit narrow for sprachling with baby seats and reluctant weans, but throw open the front door and life becomes instantly easier. Just don’t do it on the driver’s side when parked in the road, best to approach the problem from the pavement side and you’ll be fine.

Similarly, getting the crumblies in the back is simply a case of turning them round and reversing them in. If you’re not used to catering for the elderly then you won’t appreciate this, but the absence o f the ‘B’ pillar makes their life so much less difficult. This is down to the fact that with age comes stiffening joints and folks are not as bendy as they used to be. Stooping and ducking can be tricky for those with arthritis, a stiff neck, or simply bad tempered with a sharp tongue. In their defence it’s not so much bad temper, more like frustration with getting old. And we’ll all get old one day.

It’s not the prettiest looking small 4/5 seater on the market, but that’s the price you pay for this degree of practicality. The tailgate opens to reveal a decent sized boot as well, so if you do need to put a folding NHS wheelchair in the back, it’s tall and wide enough for it. Otherwise there’s plenty of room for baby paraphernalia and a bulk bag of nappies. 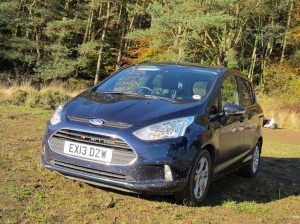 Up at the other end is that dinky little Ford 3 cylinder engine, but despite what Ford says I have been unable to replicate their higher mpg claims. That might just have more to with me than them. To get the best out of it, you need to drive sensibly, like a concerned parent or carer, whereas I tend to rev the wee thing just to hear that delightfully melodious mechanical trio up front. Unfortunately, it’s not loud enough to drown out the screaming weans!

I’ve driven quite a few 1 litre Fords over the past year with consumption averaging around 48 mpg, although the car is easily capable of 50 mpg plus, but only when the wife was in the back seat with a rolled up newspaper. If you‘re not in a hurry and don’t use the revs, it won’t sip any more fuel than a bloated budgie. 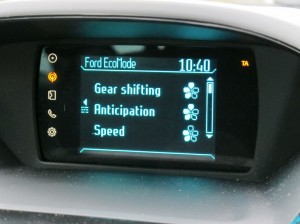 Perhaps with folks like me in mind, the B Max comes with its Ford EcoMode system built in which encourages drivers to be more frugal by awarding ‘petals’ on the dashboard display for gear-shifting, anticipation and speed. These ‘petals’ are simply a graphic system of points-scoring which EcoMode awards for not over-revving the engine or hanging on to gears when you should be changing down or up, anticipating hazards ahead by slowing more gently rather than jumping on the brakes, and for not accelerating harshly.

In other words, nice and gentle drivers will be rewarded with three lovely flowers each with five petals for each Mode whereas, folks like me will get a posy of three dead flowerheads!

The only way to get me to change my ways is to mute the engine completely and do away with the delightful steering and crisp gearchange. The B Max is every bit as nice to drive as the 1 litre Fiesta.

In fact this could be the ideal meals-on-wheels wagon for those who need a big boot and have to carry passengers of a certain age, so I’d best be careful. That could be me in a few years time.