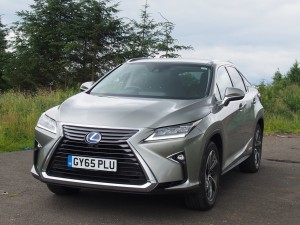 The obvious place to start is with its looks. You can’t miss it. Not even in a crowded car park. The styling could be described as different, or perhaps even garish if I’m being unkind. Whatever, the Lexus RX450h certainly makes a statement.

Looks aside there is little else to make it stand out from a very crowded car sector. Large SUV’s are becoming increasingly popular, a trend that is rapidly moving down the scale through mid size, compact to small SUVs. It seems everyone wants to sit higher up and give the appearance of going off-roading at weekends, even if the vast majority of such vehicles never see anything more than a high pavement kerb or picking up mud-caked teenagers at music festivals.

More importantly, the other reason it doesn’t stand out from its rivals, is that competition in this sector is increasingly fierce. Everyone is at it these days and not just the luxury car makers. The large SUVs coming out of South Korea are giving the premium manufacturers an ever harder time in the showrooms. That means it is very difficult to compare like with like, they are all bluidy good. 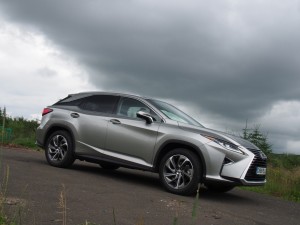 However, Lexus is pretty damn good at a number of very important things. For one, it comes with almost legendary reliability, thanks to parent company Toyota. Another is ride quality, while furniture and fittings ranks with the highest. Then of course there is the powertrain.

A big 3.5 litre V6 under the bonnet may not sound particularly economical, but it also has two electric motors, one on each axle, which may make the owner feel a little more smug at dinner parties about saving the planet. Even so, overall fuel economy is nothing startling, but for those whose travels rarely stray beyond built-up area ’30’ limits, running on electricity alone does help, not just with the smugness factor but also in reducing fuel bills.

Although it’s a hybrid, there is no external charging option, just what it can harvest from its running gear, hence its apparent frugality around town. Lexus claims 50 mpg, but I struggled to get anywhere near that on normal highway and byway use.

That’s down to the petrol engine which is called into use when the speedo creeps up once clear of the urban jungle. With 492 bhp (see Tech Spec.) to play with, the RX can cover the ground pretty quickly but it’s most impressive feature is the ride quality. Sleeping policemen? Forget them. Climbing over speed humps is like running over mouse droppings. 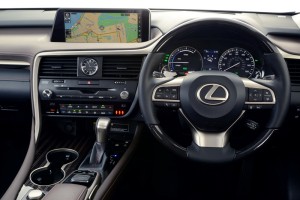 Sporting drivers might consider the suspension soft, and yes, it does roll a bit in corners, but anyone who buys this is not after a sports car, so don’t complain if it doesn’t rattle your teeth. What it offers is a comforting and cosseting ride under most conditions and that’s what most buyers of a Lexus will desire.

The one thing I don’t like is the CVT transmission. I have never been a fan of ‘continuously variable transmissions’ and although it works very well in the Lexus I would much rather have a more responsive manual or even one of the latest generation conventional ‘torque converter’ automatic gearboxes. On the other hand, for those who see cars merely as conveyances and a means of getting from one place to another with the least amount of hassle then the merits of a two pedal CVT would have great appeal. But that’s a personal view, drive it yourself and make up your own mind.

It’s also pretty quiet inside. Pulling away from rest is usually accomplished in complete silence if the battery pack is fully charged and even when the engine cuts in, it is barely discernible due to the extensive cabin sound proofing. Neither is there any deep V6 growl when using the performance. This is modern civilisation on wheels, allowing the occupants to bathe in the aural quality of the 15-speaker Mark Levinson stereo.

That whole feeling of insulation from the outside world is enhanced by the seating. Sitting in the soft leather armchairs is like being cuddled by a big amorous marshmallow and even if the rear seat passengers have to be mindful of the headroom, who cares, the driver and his/her partner will not have a care in the world surveying the outside world from their thrones.

Mind you, improved driver visibility is a good thing. It allows drivers to see farther ahead on the roads giving them the ability to spot potential trouble and be prepared. 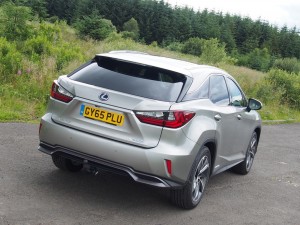 On the whole I like it, but would I have one? Not so sure. Styling and looks are always personal things and manufacturers are only too well aware of this. That’s why they employ designers and stylists and use customer focus groups and secret shoppers. They are trying to make their cars look different and stand out in a sea of mediocrity.

There’s no doubt it works for Lexus, but just not for me. I’m more of a traditionalist. Now where’s my pipe and slippers?