The arrival of a new Land Rover Defender seems to have upset more people than it has pleased. The traditionalists don’t like it because it is bigger, heavier and can’t be fixed with a bag of spanners and a hammer. As for the rest, they are somewhat bemused, they don’t actually see a gap in the market for this vehicle. Priced as it is, it will compete against Discovery and perhaps even Range Rover itself, while much of its traditional customer base has already gone elsewhere since production of the original model which launched a legend ceased four years ago .

Some of the traditionalists have already expressed concern about its physical size, especially those who may have to drive along narrow tracks between paint scratching gorse bushes, so yes, this might be an issue for some. At 2105mm (83 inches) in width, the new Defender is 113mm wider than the old (1992mm/79 inches) and that’s including the mirrors, but without mirrors, it is 206mm wider. The answer is, you’ll just need an extra pass with a scrub cutter to make the track wider!

The interior is bigger too, which means more room and comfort for the occupants while under the bonnet there is a range of 3 litre, 6 cylinder diesel engines and a 2 litre, 4 cylinder petrol, plus hybrid options. There is no shortage of power in this line-up with a choice of 197, 246 and 296 bhp diesels and a 296 bhp petrol while the MHEV pumps out 395 bhp. All are managed by an 8 speed automatic gearbox.

On that basis, the new machine will have to be assessed on its own merits. It cannot be compared to the ‘old Defender’. The new Defender is not a replacement, it’s a new car in a new market segment. With commercial versions of the new Defender likely to be priced from anything upwards of £35,000, many farmers will be content to spend five, ten and even fifteen grand less and stick with their current wide choice of pickups and hardtops.

Having got that out of the way, this is one mighty impressive bit of kit. It comes with all the electronic off and on-road driving aids that we have come to expect from the whole Discovery and Range Rover range so it will go places that the others do in equally competent and impressive style. The only real difference to separate this machine from its siblings is its chunky looks.

Inside the car the is a fascia that wouldn’t disgrace its more sophisticated ‘betters’ with an array of flush mounted switches on the central panel which in turn pop up various options on the touchscreen display. The trouble is there are so many options the choice can be confusing. Maybe that’s a good thing, as here in Scotland we regularly encounter all four seasons in one day!

One also has to be careful as gloved hands will find it difficult to navigate those buttons and pop-ups let alone grubby, mud encrusted fingers. And just to further incense the die-hard brigade, it’s got one of those infernal electronic handbrakes. Of course it works, and it works well, but it’s not as efficient and practical as a simple lever with cables, or hydraulics, and nor is it any cheaper to fix when things go wrong!

Nope, this is just another of those new fangled compulsions being foisted on to a motoring public which is being insidiously seduced by Governments into accepting more and more ‘driver aids’ on the road to fully autonomous cars – and the vehicle manufacturers are having to comply with these directions and instructions.

Such fears aside, on the road the new Defender offers a comfortable, almost cosseting ride, with plenty of head, shoulder and leg room, even for those in the back. Of course, the windscreen no longer hinges open to provide free air-conditioning and no longer does the bigger driver bash his or her right elbow when turning the steering wheel. Similarly the driver’s left leg no longer ends each week with a variety of bruises suggesting you have a carnaptious Shetland pony which lashes out, or a small herd of pedigree coos which have their own tried and tested painful method of letting you know if you are not being sufficiently gentle with the ‘squeeze and tug’ traditional style of hand milking operation.

In other words, this is an entirely modern and comfortable, very capable vehicle. And when I say ‘capable’, I mean ‘capable’. Just point it at the horizon and it will get there no matter what lies in between – apart from deep and fast flowing water. Although having said that the wading depth is 900mm (nearly 36 inches) and naturally, this being the new electronic age, it comes with its own very own ‘Wade’ programme to help out the inexperienced, the fearful, the foolish and perhaps even the eedjit!

On the test route at the Land Rover Experience centre at Dunkeld there was the expected mixture of mud and water, ruts and rock but nothing too extreme – that will come later – although there was one extremely technical rock slope which had to be tackled. It looked a bit like a very steep scree slope with a variety of stones, big boulders and huge rocks. An obstacle that would make most sensible folk think twice then look for a way round it. Not this time, the route was up and over.

Put it this way, if this had been my own private transport, I would have gone round it. However, with the gentle (!) encouragement of the LRE team ringing in my ears through the open window I went for it. First raise the suspension and select the Rock crawler mode, then line it up. Certain parts were so steep the ground disappeared from view over the bonnet hence the need for external guidance, and despite the fact that the Defender did slip and slither at times as the rocks rolled and moved, forward progress was impressively maintained, including one deliberate stop with the front o/s wheel waving in the air while the rear n/s was buried inside its wheel well. And I didn’t bang my head, elbow or knee once!

Land Rover have stated that there will be a commercial version with rubber floor mats and fewer creature comforts and a cheaper price tag. Even so, one wonders if there sufficient numbers of gentleman farmers around to buy one. Sporting estate owners also might think twice about their waxed jacketed, welly booted clients clambering in and out with guns and haversacks and pointed fishing gaffs.

And yet, for those who are not fussy about their machinery, it might just pass the dead sheep test!

Which makes the new Defender a real puzzle. I don’t know who will buy this machine or where the market is. It has the looks of a bulldog, the tenacity of a border collie and the manners of a Labrador.

Prices for the 110 station wagon start from around £45,000 depending on engine and spec, but you can pay a lot more. Future commercial versions should be around £10,000 less.

But you know what? I would have one myself over a Discovery or a Range Rover, and I can’t honestly say why. Perhaps because luxury off-roaders are too common these days and I just want to buck the fashionable trend, and also perhaps it looks more durable and less expensive and therefore less intimidating to take off road.

There are those out there who say the looks will never appeal. On first sight in the flesh, I too thought it ‘different’, but I’m a convert. I like it, I really do, and it is now my first choice of off/on-roader. Now is that sacrilege, or what?

P.S. When I get one for a longer test, I’ll let you know. 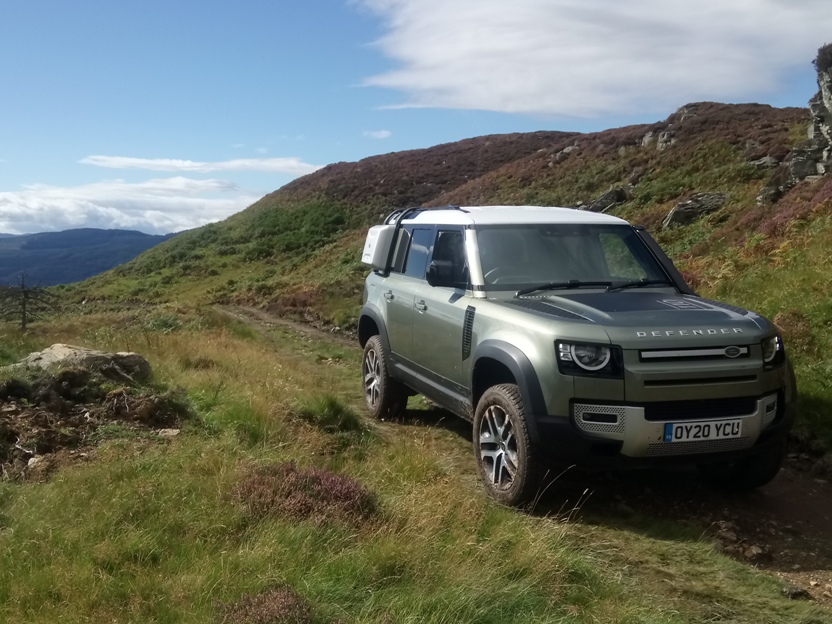