What a belter of a wee motor. Driven, assessed and recommended. Job done. End of test report. No more needs to be said. The shortest road test ever? 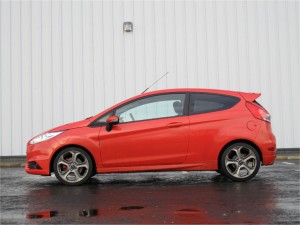 Seriously, this is what Ford does best. Small cars with big character, huge fun and plenty of poke. It’s as nimble as a bargain blagger at the January sales and drives like a whippet scenting a horseburger.

If you’re an old fart, buy one now and enjoy a final fling before the wooden box beckons, and if you’re a youngster have a shot before the government killjoys limit engine sizes further, introduce more speed limits and increase fuel tax. In fact if our dear leaders ever get around to taxing fun and enjoyment, none of us will be able to afford a Fiesta ST!

What the ST ultimately proves is that you don’t need an exotic supercar, a Nurburgring day pass and enough money for fuel and tyres to have some decent fun. A car like this on an open road delivers blue-coloured, oval-shaped fun.

Admittedly, you will need to make an additional allowance for changing tyres frequently, but that’s not entirely Ford’s fault. It is just so much fun to go barrelling into corners, scrabble about just for the sheer flickability of it, and then stamp on the power on the way out. Doncha just love the smell of burning rubber n the morning?

In fact the only guy who liked the morning smell of burning more than us petrolheads, was King Edward II. He revelled in the smoke of burning heather and villages as he headed north for his summer hols, until he was sent packing by the McButlins porridge eating redcoats at Bannockburn when he outstayed his welcome a few years back.

There is just one fly in the ointment, Traction Control. Admittedly it does greatly reduce the wheelspin that 180 horses can generate and of course it does allow the driver to exploit the power more usably and controllably by helping to create more grip. Generally, this is a good thing, but enthusiastic drivers will complain about the lack of personal control, an ever increasing ‘safety feature’ of modern cars these days! 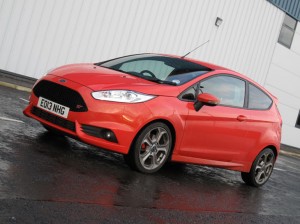 I digress, but you can be kind to your tyres, save money and still have fun. Get all the braking done early, pick a line through the bend and pour on the power. Getting it right can provide just as much enjoyable satisfaction as being a nutter, and it’s probably quicker anyway.

It can be as frantic as you like or as calm as you need – just don’t try and impress the mother in law hanging on to the two roof pulls in the rear!

The front (heated!) Recaros are well shaped and comfy, although they might just nip the well-spread bum a wee bit, and there is just about enough shoulder room for two mature adults. In other words, once you’re belted in, you ain’t going to move around too much which further adds to the visceral feeling of being part of the machine. That feeling is confirmed once you grip the hugely tactile leather rimmed wheel and gear knob. This thing is a treat for all the senses, although like many other cars these days, it has been constrained by those who do not appreciate the sound of an internal combustion engine in full flight. More killjoys. 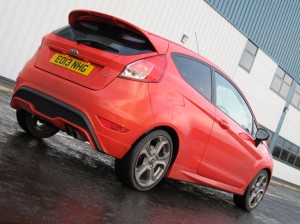 Ride quality is firm, but even with the 17 inch wheels, it’s not spine jarring or uncomfortable, although it might annoy those who don’t appreciate the other finer points, if driving slowly down Edinburgh’s Royal Mile cobbles. The answer to that though, is stay out of Edinburgh. Leave it to the gold-plated trams.

It’s an ‘everyday car’ with road manners and sensible fuel consumption (Ford claim 47.9 mpg combined) to appease the commuter, while able to act as a weekend revitaliser for those who don’t like energy drinks.

And just in case you’re in any doubt. I liked it. I liked it a lot. I haven’t chuckled so much since seeing the look on Big Hamish’ face when Colin locked the keys in the service van!