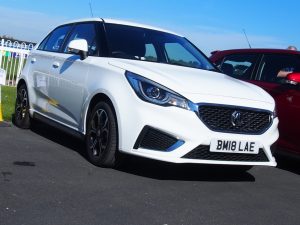 It’s not just the face that’s been lifted, but the price too. Even so, the latest MG3 range starts at just under ten thousand pounds, which has to be worth a look for those seeking a five door hatch and are on a strict budget. There’s a bonus too – a 7 year Warranty.

The original MG3 was not the most sexy, alluring automobile on the market, but it proved popular shifting over 10,000 cars in the UK market since it was introduced 4 years back.

That was down to a number of factors. The entry level price back then was some 2 grand lower than the new updated price and for that you got a sensibly sized 5 door hatch with reasonable creature comforts and that 7 year Warranty. It wasn’t the quickest car around nor the most comfortable in its class, but to get these ‘extras’ would require significantly more cash if you visited rival manufacturer showrooms.

On that basis, it was time for a refresh and the new car was launched in the later half of last year. And what a difference, both inside and out. 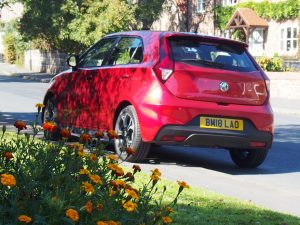 The new front end lights and deeper grille lift the looks of the car completely and doubled up with a refreshed rear end, the complete car just looks a whole lot smarter. It’s the same inside, but more.

The interior has been completely redesigned and now incorporates an eight-inch touchscreen infotainment panel with Apple CarPlay, but only for the Excite and Exclusive models and not the entry level Explore. A leather steering wheel and partial-leather sports seats complete the improvements in the more expensive models which will enhance the appeal to those who simply want a good looking and comfortable little runaround.

If it’s a sports car you’re after then look elsewhere. The MG badge these days has little in common with the original reputation and heritage of the brand, but then again, the brand still has nostalgic appeal and will no doubt help in attracting folk to the showrooms. 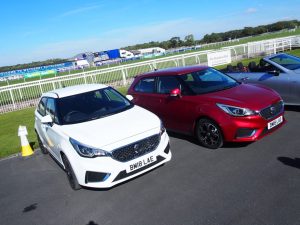 The new model retains the same 4 cylinder 1498cc petrol engine as before with two more hp and half a second off the 0-60 time, but that doesn’t really make it feel any quicker. The steering is better but the ride quality is much the same. It’s OK on smoother roads, but if you go for a drive in the country just make sure the cap is screwed on tight on your Irn Bru bottle.

And yet, I liked it. It’s a good four seater (5 at a squeeze!) with decent headroom, has a pretty generous boot for its size and feels quite nimble on the move. If MG can upgrade the engine and tune the suspension to suit British roads while keeping the price differential to its rivals then they could be on to a winner.

Even so, the end result is a better car than before and if MG continues to make progress in this direction then here is absolutely no reason why they shouldn’t succeed. 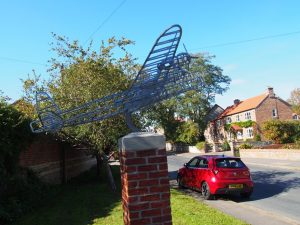 The entry level ‘Explore’ will get you in the driving seat from just £9,495 while the ‘Excite’ model costs £11,395. The test car was the ‘Exclusive’ version costing 12,795 and comes with all the extras including s set of awfy smart 16 inch alloys.

Well worth a birl if you fancy it.