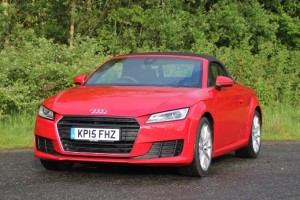 I was sitting outside the shops. Waiting for the wife. So I had plenty of time to sit and look around the interior of the Audi TT Roadster and simply enjoy the little engineering flourishes that some proud professionals had built into their creation.

Forget for a minute the outward appearance of the car, that’s an altogether personal and subjective argument on its own. But what everyone can appreciate is the sheer delight to be had from thoughtfully designed and well engineered interior details.

We all kind of take a car’s interior for granted, unless you’re buying something exotic, but this is just a pretty little roadster, so why bother? It comes down to pride I suppose, and a desire to stamp some individuality and flair on a means of everyday transport. 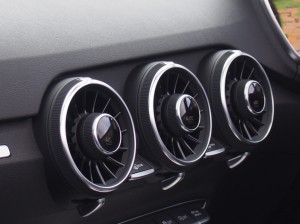 Take a simple thing like an air vent for instance. The Audi TT has five on its dashboard. One at each end of the dash and three in the centre and they look the intake cowls on a jet airliner. The silverised plastic rings that adjust air flow and direction have a textured black rear surface so that sweaty or frozen fingers can grip and feel the adjustment. The central part of each is a switch which controls the aircon, auto climate control, and airflow, but they only illuminate when you switch on the ignition.

Then there are the doors panels. Five different material finishes and each with a perfectly thought out function. The leather arm-rest has a rubber panel above it to protect the suede lining from bitten or manicured nails, and the textured plastic surround protects the whole panel and provides a door pocket for storage.

Even the little ‘TT’ badge on the dashboard is beautifully machined adding just another tasteful detail to a perfectly crafted interior. And then there’s the thick, padded, leather rimmed wheel with the flat bottom. Gimmicky? Not a bit of it. It allows those of more generous proportions ease of access to and from the cabin, but it’s the shape and feel of it that makes it so compulsively grippable. Sad I know, but it’s one of those wheels that certain blokes would like to take to bed with them rather than leave them all alone in the car overnight. 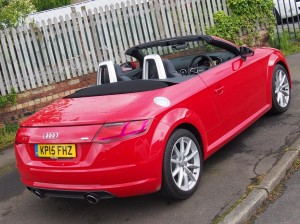 I was tempted to try lowering the hood, but I was parked in Coatbridge. That would be asking for trouble so I left it till I had driven to the more genteel and salubrious area around Shotts where a single finger tip operation lowered the hood quickly and just as quickly raised it again.

On a personal note, the fabric hood is preferable to steel retractable tops with all their cantilevered mechanical complexity, whereas the fabric hood just folds flat into a recess in the boot. It also requires less room for storage which creates more space in the boot.

The downside of a fabric hood is the noise level. It is noisier than a metal top, but what the heck, this is a roadster, you expect a bit more road noise to intrude. What you don’t get is any scuttle shake, this is a quite a solid little motor.

The car is at its best on a country road with the windows down and the draught excluder behind the seats lowered, revelling in the sights, sounds and some of the smells of the countryside – you can smell the slurry tankers long before you see them! But that’s all part of its top-down charm.

The last TT I drove was the quattro version but this was the front wheel drive, 2 litre Ultra Sport model and plenty quick enough for fun, and sensible enough for frugality. The 182hp unit lets you know it’s a diesel, but with the hood down and the open road ahead, it would be hard to tell, and even with the hood up, it’s the road noise and other traffic that you hear mostly rather than what is under the bonnet. 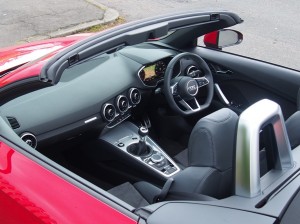 If you do want a quiet car then this might not be for you, best stick with the hard-top version, but I’ll tell you what, give it a try and you might well be tempted. Just don’t complain after you’ve bought it.

There is just one drawback. It’s a pricey little rascal. In standard trim it’s £31,310, but the test car had six and a half grandsworth of extras. For instance, the red paint job was a £545 extra and the MMI/SatNav system added another 1500 quid. Leather trim added £395 and even the central arm-rest was a £175 extra. As for the heated seats, I reckon they were a worthwhile £325! But maybe that’s an age thing.

Even so, and despite the price tag, I loved it, and would have one like a shot – but I would have to shop elsewhere. A bloke in a pretty convertible in Coatbridge? Too-oo risky.

Note to self: When leaving a Coltness Car Club night, don’t lower the hood here either, certainly not within sight or sound of any of the Bears. For those with tender ears and who might be easily offended, keep the hood up till round the corner and out of earshot!