You are here: Home » car-reviews » 05 May: Discovery off-road 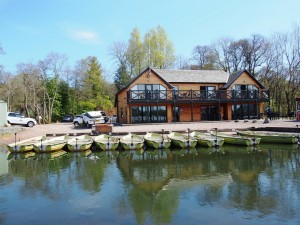 What could be better, the sun glinting across the ripples on Butterstone Loch, the flag fluttering limply in the cooling breeze, the spectacular central Highland scenery purpling the horizon all around and the lush greenery as trees and grasses awake from their Winter dormancy. Shirt sleeves are the order of the day while the distant buzz of busy bees adds life to the landscape. Scotland at its finest.

Only it’s not bees. It’s a swarm of hard working internal combustion engines in low gears echoing across the 230 acre estate.

Nor is this just any estate. This is Highland Off-Road centre at Dunkeld where Land Rover was hosting a day of umpteen tasks that it should be impossible for a luxury vehicle to accomplish. Not just any luxury vehicle this was the brand new Discovery.

Land Rover may have moved on a bit from the original straightforward line-up. Defender for the mucky boots brigade, Discovery for the green welly wearers and Range Rover for the leather brogue set, but you can’t fault their reasoning. They are selling more cars every year.

However, there is hope in some quarters that the new Defender next year (hopefully!) will bridge the gap between the original Land Rover and the early Discovery and appeal to both sectors, from the farm and forestry worker to the shooter and fisher. Tough job but then that is what Land Rover is renowned for.

As it is, the new Discovery won’t appeal to the middle sector as it has gone distinctly upmarket. And yet Land Rover claim “this is the most capable and accomplished ever.” Now there’s a bold claim given the bloodline.

To prove the validity of this boast Land Rover had invited the nation’s most prestigious motoring press (plus one!) to Luss for a presentation on the design and merits of the new car before a road drive to Dunkeld to Graham Clark’s ‘Spanish Inquisition’ for four wheel drive vehicles.

Some of you will remember Graham from his Subaru Impreza exploits in the Scottish Rally Championship in the early 2000s, but these days he sits in an upstairs room of his Highland Off-Road HQ running one of the busiest Land Rover Experience centres in the country. He has a fleet of Land Rover products and a staff of 15 to manage and they provide every visitor with tuition and a new found respect and appreciation of the capabilities of their 4WD machinery, not to mention memories of an automotive experience that will last a lifetime.

Enter said bunch of cynical motoring journalists. For some it was neither their first visit nor their first foray off-road, while for others a brand new experience beckoned. 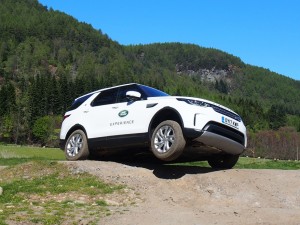 Given the motoring experience of the collected assemblage, there was no need for the nursery slopes that beginners have to conquer before being taken into the woods, through the swamps and over the rocks. It was straight into action.

That is after being introduced to the Instructors. Given the nation’s god-fearing approach to H&S and ‘Lawyers-for Eedjits’ these days, such driving centres must have Instructors accompanying members of the great British public. These lads help and explain the many complexities of the modern electronically managed, all wheel drivetrain. Something that would take hours to learn on one’s own can be explained in minutes by someone more technically competent and knowledgeable.

In this case, John was the appointed Instructor. Needless to say, his knowledge was invaluable not just on the technical capabilities of the Discovery, but on the routes, features and obstacles ahead.

There were long slithery, dust and pebble strewn slopes twisting downwards into glens between the trees and impossible snaking climbs up the other side that would have the local deer looking for an easier life. Even without the cloven hooves, the Discovery crawled and climbed like it was a natural part of the scenery. It stuck to its task like a tick to a bear’s backside. 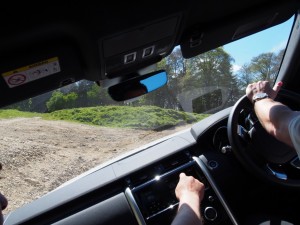 Then there were the traverses to demonstrate wheel articulation and slopes up to 26 degrees were driven across without any of the vehicles falling over. Inside the cabins, where gravity threatened to toss the humans out the side windows, seat belts biting into flesh only served to confirm how unnatural this procedure was. And whilst we mere humans were restricted to 25 and 26 degree slopes, John had actually seen 31 degrees on the inclinometer when trundling around on his own.

The gully traverse saw the Disco approach a steep, narrow ridge at 45 degrees and then climb with the front n/s wheel leading the way, and as it dropped over the crest the rear o/s wheel swung up in the air as the car executed its four wheel approach, three wheel climb, two wheels balanced elegantly on the crest, before the three wheeled descent and back on to four on the far side. Inside the car, apprehension and fear in equal measures rise spectacularly compared to standing watching these acrobatics from the outside. 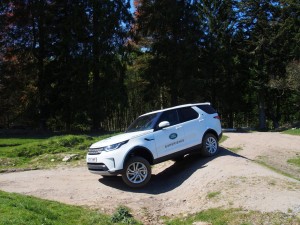 Even though you know it can be done, the feeling is quite extraordinary, time after time. Fear and the physical sensation almost swamp the brain and the sense of self-preservation. This is not something that many people in their own 4x4s will ever attempt – apart from those essential nutters who offer recovery and radio services on stage rallies!

The mechanical sophistication of the modern 4WD system defies belief, but in a sense, it’s cheating. In the old days before ECUs, sensors and hydraulics, skill and bravery was needed in equal measures when venturing off-road, now it is so simple a motoring journalist can do it. It’s easy. All you need is confidence in the machine. And that is what Land Rover inspires. 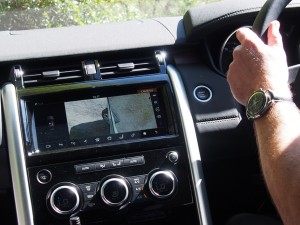 Aiding this sense of confidence is the all-round camera system. The driver can see which way the front wheels are pointing, how close they are to the edge of the road and get a good idea of the terrain ahead and around. However it would be unwise to take your eyes off the road and concentrate solely on the centrally mounted screen on the dash, it’s hard to distinguish gradients. That rockface on the side might not be a cliff, it could be a sheer drop.

The technology takes a lot of the guesswork and bravado out of off-roading, but as an example of how it can aid human endeavour it is quite uncanny. Even the most cynical die-hards left the venue having learned something new.

The new Discovery is a case in point, but with prices starting from 44 grand going all the way up to £68,000 it will be out of reach of many. That doesn’t stop making it one of the most desirable cars – in the world.