Audi is really good at building cars, and they are building some really good looking cars these days too. The engineering is sound and the ride and handling is pretty good right across the range. But they don’t do ‘understated’ very well. 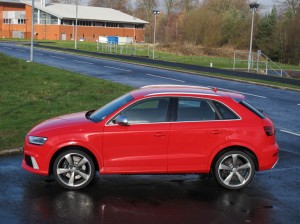 When the Q3 RS was delivered to Castle Bunnet the neighbours couldn’t fail to miss it. It looked like a bright red beauty spot on a supermodel’s lily white bum. It positively glowed just sitting there. The 20 inch rims did nothing to dim its posing credentials either while the bold white lettering under the front grille proclaimed to all and sundry that this was a Quattro. And for those who had to bend down to read it, their eyes had to pass over the RS badge on the grille, lest there be any doubt about its genes.

Similarly, the RS badge on the tail informed anyone close enough behind that this was a serious bit of motoring kit. But the stylists at Audi couldn’t leave it there. The large bright trimmed, oval exhaust was wide enough to tempt hibernating bears while at full chat it sounded as though one was already snoring inside.

Then there was the chrome edge to the rear ‘diffuser’ panel, and shiny wing tips on the outer edges of the rear wing which carried through the lines from the embedded silvery roof rails. A little bit of chrome trim round the window frames and silver coated door mirrors decorated the side view while the air cooling ducts on the front airdam contrasted brightly against the red paintwork and the black grilles which were themselves embroidered with more shiny stuff.

Finishing off ‘the look’ were slightly wider arches round the wheels, no doubt helping to protect those glowing red flanks from stone chips. 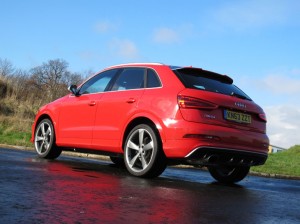 This thing is motoring temptation on wheels, but there was disappointment ahead. On firing it up, it does little more than gruffle. It’s too quiet. That’s not really Audi’s fault, it’s the fault of all these killjoys who don’t fully appreciate good mellifluous musicians like Quo, AC/DC and Iron Maiden and fail to understand the musical cacophony that a multi cylindered internal combustion engine can generate to soothe the needs of petrolheads. The same kind of selfish eedjits who buy a new house near a motor racing circuit – then complain about the noise.

Instead of the meaty roar of a 306 bhp, 2.5 cylinder turbo engine, all you get is a tuneful tease. A sort of canapé cube of corned beef, and not the full bratwurst. Just a taste of what could be.

On the other hand there is no problem with the delivery, albeit it without the volume, but this thing is seriously quick and with its four wheel drive system provided stupid levels of adhesion regardless of the weather. It was wet during a quick blast over the Campsies at Lennoxtown where the B822 Fintry road is not renowned for the smoothness of its tarmac.

There was another revelation in store. For someone who is not usually a fan of hugely diametered wheels, Audi has got this one sorted this time. Normally these big wide wheels with their skimpy rubber wear reward the driver with a ride akin to a rollercoaster on cobbles. Not this time. You could just about hear the thumps and thuds outside the car from the Pirelli P Zero 255/35s but hardly feel them inside. The suspension too did its job, controlling some of the more violent camber and surface changes without the pitching and rolling that usually comes with softer sprung machinery on this road. 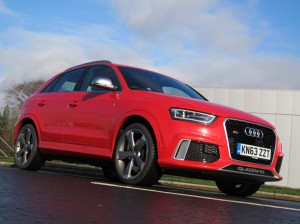 But it wasn’t just the grip, and the speed which it carried through the bends, it was the way the beastie hurled itself out of the corners and on to the next where a firm prod on the middle pedal halted the anger and allowed the car to be turned in, squirted through and out the other side again, much more indecently than a small SUV should.

This turbo boosted surge through the gears is much more impressive than the 5.5 sec standing start to 60 sprint would suggest. There is a price to pay though. The best average I got was 24.7 mpg in normal driving, but the performance was sufficiently tempting to achieve a much lower average – easily! There is another, ever so slight drawback, the price. But if you can afford the 43 grand asking price, then fuel economy won’t be uppermost in your mind.

Despite all this glitter and go, it’s a practical motor. The all wheel drivetrain ensures it’s a neat fit for driver and passengers, so it’s better for four rather than five. It’s also got a decent sized boot which is further enlarged with the rear seats folded flat, and because it’s an SUV you won’t rick your back hefting the wife’s oxy acetylene (she refuses to even try this new fangled MIG or TIG stuff) bottles and equipment in and out.

The heated sports seats and flat bottomed leather rimmed wheel just finish off the leather trimmed interior and although typically dark, it’s still a pleasant place to be.

I liked it, all it needs is a volume control for the engine!