Allan McDowall gave his ‘new’ car a shakedown at the weekend’s Mach 1 Stages Rally. His Opel Kadett now has a 2.5 Millington power unit. This is the same car he used to win the 2011 BTRDA Silver Star series but three years ago switched to an Escort Mk2. “I started rallying with a Mk1, then a Mk2 before I got the Kadett,” said Allan, “I was third in the BTRDA Silver Star series in 2017 but since I seem to have more luck with the Kadett I’m trying this. It’s still on forest suspension, so it’s not ideal for round here but it feels really quick.” McDowall has plans to contest more BTRDA events, adding: “I’m quite pleased with 14th overall today, first time out – and we had no power steering!”

Ian and Alan Paterson didn’t have a good day in the Subaru. The flat four engine had recently had the cylinder heads done but the timing was out and it wouldn’t rev over 4800 rpm. It was flat out at 82 mph, so it wasn’t right. They actually completed the Saturday stages but a slow run on Sunday morning confirmed they’d best pull out and save the engine. They had also lost time on one of the Saturday stages with a burst brake pipe.

Also in trouble were the Grierson boys, and here’s a strange one. The carbon fibre prop shaft on the Subaru separated itself. It appears that the glue binding two parts together had ‘dried out’ and the two parts came adrift. Really odd. Anyway, Gordon Morrison lent them a prop shaft and Stuart Paterson and Paul (Big Tasty) Hogg sprachled about underneath the car to swap them over, so a top ten finish was hard earned.

It was good to see Kieran O’Kane back on ‘home’ turf with the Ascona. He finished 12th o/a: “That’s the first time ever I’ve had ‘hard’ tyres on the front and it transformed the car,” said Kieran, “the long stages and the heat just made it.”

Hoping to give Colin Gemmell a run for his Money were Ross Auld and Richard Stewart in the Honda engined Mk2 but the car suffered a recurrence of earlier troubles when the oil pump drive belt broke. Bad enough, but when it shredded it took out alternator belt too, so the engine stopped. Not to be outdone, Ross got belts delivered to the Ardrossan ferry terminal and picked them up from the boat when it docked in Campbeltown on Saturday evening. The belts were replaced that night but when they started the engine up in the morning, it started vibrating and shaking and did it again. That’s the third time this has happened since the engine was installed over the Winter months, so back to the drawing board, eh? Robert Marshall’s retirement in his Mk2 was down to a broken engine mounting.

1600 class winner Kyle Adam was full of praise for the venue: “I don’t have much experience of ‘flat-out’ motoring, but there was plenty of top gear stuff here and flat out long corners, it was really good.” The only problems he had over the weekend was no intercom on S6 and couldn’t hear Fiona, and another issue which was ingeniously resolved. Apparently the car was running very hot at times under the bonnet on the longer stages which caused the ECU to trip out into ‘restricted power’ mode, so they raised the rear edge of the bonnet to allow more air through the engine. Job done.

Another driver who liked the venue was Alan Oldfield from Yorkshire which was indeed fortunate as he driven 353 miles from Yorkshire to get there (and faced another 353 to get home!) and raised a smile when he commented: “I thought we were nearly there when we got to Arrochar and then saw a sign which said 94 miles to Campbeltown!” Also far travelled were the Northern Irish crew, Eamon McCrystal and Paul Parker who finished 22nd in their Escort: “I actually live in Glasgow but the car lives in Ulster,” said Eamon, “so I’ve got to drag it back to Cairn Ryan after this, but this is my first time here and I’m loving it.”

Michael Robertson’s day started badly, and went downhill. He broke a driveshaft on the Honda then missed the next three stages while they fished the broken bits out. This was achieved by taking out the driveshaft on the other side and then punching through from the far side with a long taper. On Sunday morning a front suspension arm fractured which would need welding – and then the diff failed on SS10.

One of the oddest things seen at rallies was the radiator in the Russell and Adam Milne Escort Cosworth after it rumbled off the road on the 3rd stage. There was no big impact and the car looked relatively unscathed but an arrow stake had gone through the grille and into the radiator. Weirdly the core was intact and so was the header as the stake had speared right through the join as neat as you like. Oddly enough there as a distinct lack of Ford Escort Cosworth stockists in the Campbeltown area so no replacement was found!

The Dalgleish boys joined the non-finisher ranks when the Subaru slithered off the road on the first stage on Sunday morning, down a wee banking and into a soft, wet bog. No damage, but the car was stuck fast. Even so Alistair and David were none too disconsolate. The engine is just back from TEG and the boys were fair enjoying the power. They reckoned the reason they went off was they had just fitted new front tyres but hadn’t changed the rears, and although the front gripped, the rear end didn’t, dragging them off the road.

Knowing what to expect, Duncan McLean arrived at Mach1 well equipped to co-drive for Leonard Jones in the Chevette. The car is quite softly sprung and the venue is full of sharp turns and fast bends, so Duncan had a sick-bag with him. Unfortunately he needed it on one of the stages. Even more unfortunately, it leaked. So the moral of this story is make sure you have a ‘watertight’ container if in doubt. They still finished 26th o/a but the ‘sweet smell of success’ is not one they are familiar with!

Things looked a bit hectic inside the Garry Coutts and Paul Tonner Fiesta but that was only because the intercom had failed and Paul was trying to keep Garry right by using hand signals, so a top 30 finish was hard earned. George and Lois Fell had to retire the Renault Clio when the engine cut out as it approached the ‘Out’ control after service and simply refused to fire up again.

Kevin Jaffray and Shona Hale lost over 7 minutes in SS7 when the wheel studs came off the Toyota Corolla followed pretty quickly afterwards by the wheel. “The brake disc now has a flat bit on it,” said Kevin but they still finished 38th o/a.

The Peugeot 205 of Marcus Tinsley and Cameron Dunn was going well in Class in the 1400 class till a con-rod deconstructed itself sending bits everywhere like shrapnel, and the Peugeot 106 of James and Louise Strachan didn’t get far when a big end failed on the 4th test. Andrew Logan and Calum Fraser were getting along fine with their Peugeot till the start of SS11. Until that point, the crew and the car had been behaving perfectly, and then it just stubbornly refused to fire up to go again. The boys were sorely puzzled as it had a spark and was getting fuel, but life there was none! The Saxo of Stevie Alexander and Christina Turner was another non-finisher when something broke inside the gearbox, oil came out the top and the exhaust set it on fire. No real damage done, but it needs a new gearbox.

Jack Gray and Victor Mackay, oops sorry, Gavin Gray and Colin Mackay finished 36th o/a in the tastefully decorated Citroen ZX Dakar but only after an overnight gearbox rebuild. Third gear was getting noisy on Saturday, so the boys set to on Saturday evening to fix it and were ready for Sunday.

Ian Findlay and Ronnie Bowie lost a minute and a half on the first two stages when a turbo pipe came off the Subaru. They got it fixed and were back in business for SS3 finally finishing 27th o/a.

Graham and Robert MacDonald’s rally was short-lived when the Subaru’s diff failed on the 3rd stage and the Subaru of Paul Collins and Thomas Wilson was retired with steering failure.

Carlisle’s Keith and Jackie Richardson didn’t have much luck in Campbeltown. The Escort Cosworth broke it’s gear linkage on the first stage and they missed the next three while folks rallied round to help them repair and get them back out for Saturday afternoon and the Sunday run. Nice one folks.

John Kean and Jennifer Kelly didn’t fare any better than the Richardsons. They had a driveshaft failure early on and missed a couple of stages with a faulty fuel pump relay but even more puzzling, they found a rock wedged inside one of the Peugeot’s coil springs. But it begged the question, how long had it been there – before this rally?

A Specsavers moment. As Ian and Alan Paterson sat on the start line for stage 3 they spied Alistair Inglis’ white Lotus in the distance on its second lap and as the blue Subaru blasted off, Ian thought: “Ach we’re well ahead, he’ll no catch us.” Within a mile, the rear vision mirrors were catching glimpses of a wee white sports car. “Jings, crivvens, help m’boab (or words to that effect) where the heck did he come from?” said Alan. As the Subaru was misbehaving anyway, Alan suggested they pull over and not hold him up. So they did, and then sat there for umpteen seconds till finally the wee white Darrian sped by – it wasn’t Alistair at all, it was Andy Horne who had started behind them! If you thought Ian’s Subaru was blue you should have seen the air inside the car when the dynamic duo realised what they had done! It is alleged that afterwards, Ian suggested ever so politely, whilst intimating a degree of urgency would be required, that Alan get himself to Specsavers and ask for a chart with car silhouettes, not letters and numbers! Aye, SAGA tours has nothing on this pair, eh? 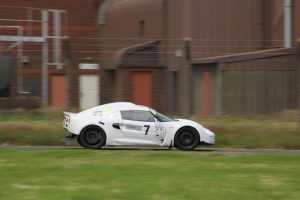 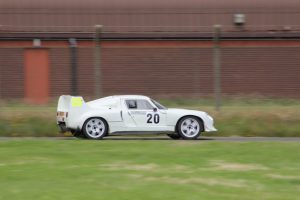