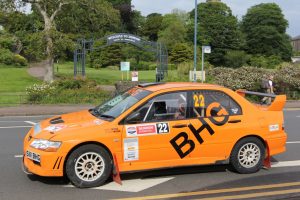 Turns out that the accident which befell Stuart and Marc Irvine in Argyll was rather more serious than first reported. Even as this was being written Marc is still in hospital although due to be released soon. The confusion arose from the aftermath of the incident when the car left the road and was almost lost in the bushes. Stuart was out of the car first and noticed steam coming from under the bonnet, before realising it was smoke and shouted at Marc to get the fire extinguisher. What he meant was the handheld, but Marc kicked the onboard into life and was rewarded with a jet of extinguishant in the face. It would have been funny had it not been so serious. Anyway with the fire out, Stuart went back to the road side with the ‘SOS’ board and the emergency services swung into action. Then Marc appeared and grabbed the board from his Dad and started waving the ‘OK’ side as he didn’t want to disrupt or delay the rally! Hence the initial confusion. Fortunately the CofC took decisive action and called in the rescue and paramedic teams. Both lads were taken straight to Cowal Community Hospital in Dunoon and from there Marc was taken first to Inverclyde Royal in Greenock before being transferred to the Queen Elizabeth University Hospital in Glasgow and an operation was carried out on his three broken vertebrae.

Trouble was Marc developed a chest infection post-op which turned quite serious and this was initially of more concern to the medical team and the family than the physical injuries and the healing process. Last week proved to be a most worrying time before Marc’s condition was stabilised. He now has two titanium rods supporting the fractured area – and he has been told no rallying for 7 to 8 months! He didn’t look too good on Sunday night, but when Stuart was in seeing him on Monday, he was actually up and about, although the morphine may have had something to do with that. What might have been rather more amusing was the sight of them arguing. As the driver, Stuart was blaming himself for the accident, while Marc was insisting it was his fault for a late call!

Both Marc and Stuart would like to express their gratitude for the help and care they received from the paramedic teams at the rally, and especially the female Paramedic who was first on the scene, and to the ongoing medical support they have received at other hospitals since. Without prompt attention the outcome could have been much worse, fortunately Marc is on the mend and is due to be released shortly.

As for Stuart, he had the final laugh. At 4pm on Monday afternoon he got a telephone call from the Casualty Dept in Dunoon asking how they were. Stuart went into detail about Marc before the caller finally asked, “And how are you?” To which he replied, “What do you mean, it’s Marc that was injured, you told me I’d be bruised and sore for a few days”. The caller persisted and Stuart admitted that he was indeed rather tender and unable to sit down. “I’m not surprised”, said the caller, “we’ve just had our weekly review of X-Rays – you have a fractured tail bone.”

Fortunately, Stuart could see the funny side – “I’ve actually got a broken arse!”

It’s only at times like these we really do appreciate the increasing emphasis on rally safety these days and the training that paramedics, marshals, radio crews and rally organisers undergo. We should all be grateful, not just Marc and Stuart.

STOP PRESS: As of today (Wed 3rd), Marc is out of hospital. You’ll never guess what his first port of call was? The garage. He wanted to see the car and get his Route Notes, but he’s been well tellt – dae nuthin’ for two weeks, and that’s just for starters!

New car … Bob Adamson appeared at Dunoon with an awfy smart new Ford Escort Mk2. It’s an ex-Robert Marshal car converted from tarmac to forest spec and this was to be its first run out. “I haven’t driven it at all yet,” said Bob, “the Skoda was sold within 23 hours of being advertised and was sent to Ireland for someone to use on the Donegal so it’s all been a bit of a rush. Apart from converting the suspension the worst job had to be fitting the two seats – that’s surely the worst job in the world!” Job done, 25th o/a achieved. Onwards and upwards.

Jet lag … I suppose he can be excused for spinning at the first hairpin in the very first stage because Carl Tuer’s return flight from the Alps was delayed and he finally got into Newcastle airport at 11pm the night before the rally, then it was immediately northwards to Argyll. But that wasn’t the only reason he was ‘tired’. Apparently he was on a cycling holiday, in the bluidy mountains! Silly sod, that’s why we’ve got cars. Anyway, the rest of the rally didn’t go too well either. A driveshaft broke in the Suzuki in the 3rd test. Rally over.

Strange faces … in familiar places. A cycling helmeted, sunglasses-glazed, mountain biker complete with naked hairy legs was watching proceedings at the Rally Start. Turns out it was one Bobby Youden who used to run the garage on the seafront in Dunoon and rallied a Ford Escort in the Scottish Championship 20 odd years ago. The garage is sold these days although he’s doing a bit on 4x4s especially Defenders but still retains an interest in the sport. To the extent that he had been cycling some of the stages on the Friday to check out conditions and reported back they were good – and no doubt scout out some good spectating points.

Birthday boy … Johnnie Mackay turned 18 the day before the rally and his Dad turned —- a year older on the Saturday, but stayed remarkably sshtoom about just how old! Sadly there was little in the way of celebration as the Fiesta ST failed to last the distance. Initially they had a starter motor problem and used a ‘Duncan Cameron Fix’ to get it going. This consisted of a wire under the bonnet which had to be physically touched to the power to fire up the starter motor – just don’t tell the Scroots – although it was all perfectly safe and secure with tie-wraps and insulating tape, and then the clutch failed!

Scott-free … There was no sign of Scott MacBeth in Dunoon, but he had good reason – he was on a late (very late!) honeymoon in Canada.

Sugar fix … Having acquired Mike Stuart’s red-top engined Mk2 just before the rally, Mark McCulloch didn’t have a chance to drive it. However after the rally the first ‘mod’ on the list is to fit power steering. “I was knackered after the first stage,” said Mark, “and we had to do two more before service.” He was ready for a sugar fix on his return to the Stadium but not Irn Bru, Lucozade or Red Biddy. Nope. It was some seriously thick slices of his Mum’s fruit loaf slabbered with butter and coffee with sugar that did the trick. And she’s bluidy good at the tablet making too (as vouched for by the Editor). Even so, Mark fair enjoyed his first run in the car which was rewarded with 10th o/a and 2nd 2WD: “I actually stalled it at the end of Stage 6 on the way into a downhill hairpin. I didn’t actually realise it had stalled. I was too knackered, the ruts kept pulling the wheel out of my hands,” and added, “This is what I want – all noise and sideways,” he said.

Hot stuff … Although he didn’t finish when the Fiesta lost a wheel and slid off the road, Bobby Mitchell was struggling from the start of the rally: “The fan isn’t working and we’ve got the blower full on inside the car,” said a somewhat damp, sweat streaked Bobby, “we’re having to switch off the engine at stage starts but once we get some airflow through the car it’s OK although we are having to back off on the twisty bits and the uphill drags.” At least the ‘Star Driver Award’ will have gone some way to ease the disappointment of not finishing.

Useless bolt … Barry Lindsay’s slow time on the opening stage in the Peugeot 206 was easily explained: “A bolt came out of the throttle linkage,” said Barry, “so we had no power on the downhill finish, then we got a puncture on the 3rd stage.” That meant young Jude MacDonald got his nose in front of the class and Barry just lost out trying to reel him in. “We were going well till the trouble started,” added Barry.

Over the sea from … Ali McLeod’s long trip from Stornoway was rewarded with a non-finish when a brake pipe burst on a downhill into Left3 on the first stage of the day. The Escort slithered off the road and got stuck. He missed the next two stages to try and rejoin later.

David Kirkpatrick was another non-finisher in the BMW Compact. He claimed he did an ‘Angus’ (Lawrie, that is) when he came over a crest in Gairletter into a corner, half spun and the car reared up on two wheels with a huge drop on the outside, but he “luckily steered it into a ditch!” The nose was stuck fast in a soft banking with little damage to show for its lucky escape.

Taking one’s duties and responsibilities seriously. Stewardship … Uncle Bruce and ‘Spare’ Weall were Stewarding on the event but that didn’t stop Bruce from taking time out in one of the highest stages on the rally to indulge in a bit of ‘Facetime’ on his smartphone with his grandson – in Australia. At one point he used the camera function to sweep around the panorama and let the lad know where his Grandpops was high in the hills among the trees. Ain’t modern technology wonderful?