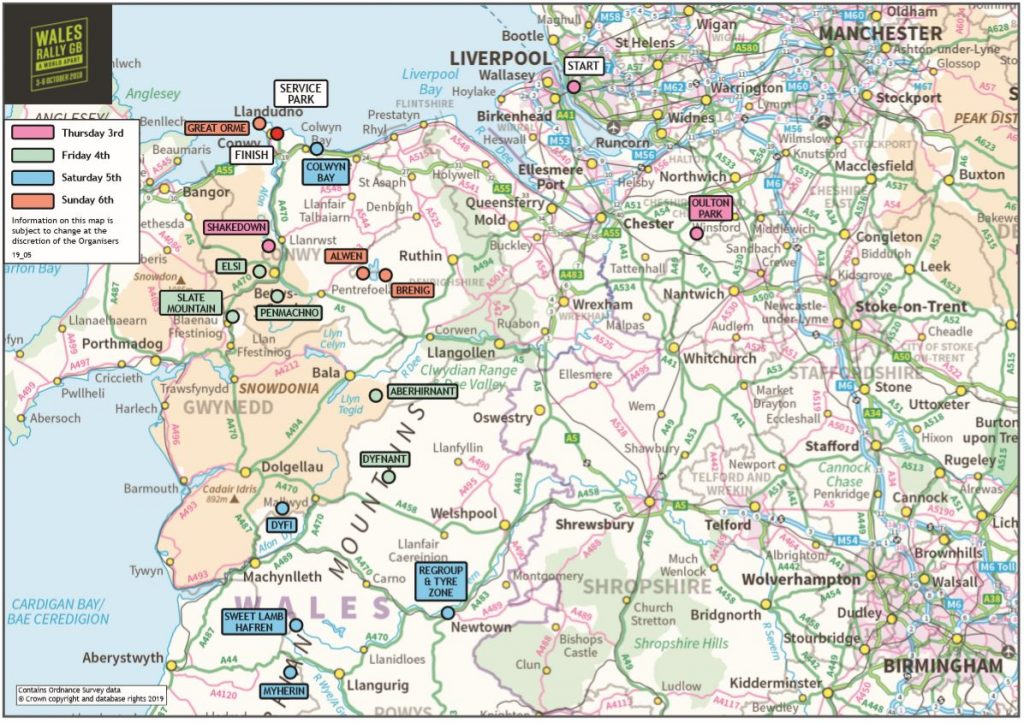 Following a final pre-event Shakedown held this year for the first time in Gwydir Forest, Snowdonia, on Thursday morning, all the competing teams will make their way to Liverpool for a high-profile Ceremonial Start on the Waterfront. The 2019 competitive action then blasts off at the popular Oulton Park circuit close to Chester on an exclusively designed special stage incorporating sections of the picturesque race track. It is the first time the well-known Cheshire motor sports venue has hosted the World Rally Championship since 1993 and, with good transport links, permanent infrastructure and great spectating facilities, Oulton Park’s re-appearance is sure to be welcomed by the large numbers living in the surrounding regions. It provides those based in major cities such as Birmingham, Leeds, Liverpool, Manchester and Sheffield – all within a 90-minute drive – a rare and not-to-be-missed opportunity to witness the extraordinary excitement served up by the World Rally Championship.

Following the dramatic Thursday evening curtain-raiser, the crews will head back to Llandudno in readiness for the forest stages that follow.

Taking advantage of the rally’s vibrant new base in Llandudno, Friday’s schedule is based in the forests of the Snowdonia National Park in north Wales. The day’s schedule features nine speed tests set either side of a lunchtime return to the busy Service Park located right in the heart of the historic resort town.

The day opens in the shadows of Mount Snowdon with classic stages in Conwy County’s forests of Elsi and Penmachno close to Betws-y-Coed and then heads further south towards Welshpool for timed tests in the revered Dyfnant and Aberhinant forests. All four stages are repeated in the afternoon with the second run through Aberhirnant taking place well after sunset in total darkness – always a crowd-pleaser.

Adding to the spectator experience, Friday afternoon’s programme also includes a revisit to the stage at Slate Mountain now with a new, upgraded surface laid since the venue was first used last October. Located at The Slate Caverns near Blaenau Ffestiniog, the destination is well-known to adrenalin-seekers for its mind-boggling underground adventures as well as being home to Zip World Titan, Europe’s first four-person zip line.

Billed again as ‘Super Saturday’, the rally’s longest and most demanding day features three epic special stages, all set in the mountains to the east of Aberystwyth with excellent spectating for the large numbers of weekend visitors, plus the new street stage on the seafront at Colwyn Bay.

Dyfi, Myherin and Hafren are true classics that always push crews to their limits and provide fans with some outstanding viewing opportunities. As last year, Hafren has been extended to incorporate the Sweet Lamb rally complex – always a fans’ favourite with its jumps and water splash.

All three stages are tackled twice with the second run through Myherin being screened live for television audiences right around the world. A lunchtime regroup on the busy streets of central Newtown punctuates the action.

Following the frenetic action in the forests of mid Wales, the WRC returns to the Service Park and overnight halt back in Llandudno via an all-new Saturday evening spectator stage on the recently-refurbished promenade in Colwyn Bay. Sited adjacent to the A55 and the North Wales Coast Line railway, the latest addition provides both rally fans and families in North Wales and north west of England – with a fantastic opportunity to experience the WRC in captivity away from its more natural habitat in the great outdoors. With donuts, hairpins and chicanes, they will not be disappointed.

After Saturday’s arduous exploits in mid Wales, Sunday sees the WRC action return to north Wales with two tough forest stages close to the Llyn Brenig Reservoir, an adventure playground set high up in the heart of the Denbigh Moors. Both Alwen and Brenig tests are repeats of 2017 when the event was famously won by local hero Elfyn Evans. Both stages are run twice either side of a timed section around the iconic Great Orme peninsula and short mid-morning service halt back in Llandudno. The second visit to Brenig is the event’s concluding Wolf Power Stage, offering surviving crews the chance to score bonus championship points in front of a live global television audience.

After a brief TV podium for the overall winners at the Brenig Visitor Centre, official prize-giving for all those completing the 2019 Wales Rally GB will take place at the Ceremonial Finish on Llandudno Promenade, four full days after the intrepid crews originally set out from Liverpool.

( * Oulton Park tickets exclude a copy of the Official Programme.)