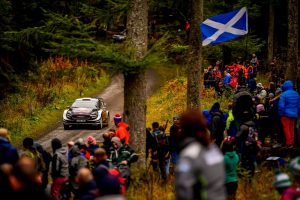 This autumn’s Wales Rally GB (3-6 October) will be more accessible, more challenging and more exciting than ever before with major innovations adding yet more to one of the UK’s premier sporting events, round 12 of the prestigious 14-round 2019 FIA World Rally Championship (WRC).

Celebrating the milestone 20th running since the international event moved to Wales at the start of the millennium, a vibrant new base within the resort town of Llandudno has already been revealed along with a new family-friendly Saturday evening street stage set on the recently refurbished promenade of neighbouring Colwyn Bay.

Now a further raft of new developments has been announced with today’s (Wednesday) unveiling of the full four-day draft competitive route for the 2019 Wales Rally GB and the on-sale of money-saving early bird tickets.

For the first time in recent history, Wales Rally GB will kick off over the English border on Thursday afternoon with its showpiece Ceremonial Start relocating into Liverpool’s iconic Waterfront sharing the World Rally Championship with an even wider audience – a world apart from the Welsh mountains where most of the action is staged.

Another new addition follows swiftly with an early evening opening special stage set at Oulton Park, the well-known race circuit situated in rolling parkland close to Chester. It will be the first time Oulton Park has hosted the WRC for more than 25 years and, like Liverpool, its easily accessible location is certain to attract a huge crowd.

For many, the Thursday evening will be their first opportunity to experience the latest generation of superfast World Rally Cars and to witness the extreme skills of star drivers such as multiple World champion Sébastien Ogier, Thierry Neuville, Ott Tänak and local heroes Kris Meeke and Elfyn Evans, winner of Wales Rally GB in 2017. Again both stars and cars are world apart from everyday motoring.

A full evening of entertainment is planned, with appearances from WRC legends and iconic vehicles, live music and DJs, historic rally displays and an autograph session which will be open to all spectators.

Friday’s schedule switches to more familiar rallying heartlands in the forests of north Wales and also – back by popular demand from both the public and competitors – sees the return of a spectacular stage run in darkness through the Aberhirnant forest close to the market town of Bala in south east Snowdonia. Underlining the unique challenge presented by Wales Rally GB, it will be the only true forest stage run after dark on this year’s WRC calendar. For the less intrepid, there is also a return to Slate Mountain.

A gruelling ‘Super Saturday’ schedule will move the battleground to mid Wales and the legendary forests of Dyfi, Myherin and Sweet Lamb Hafren. These well-established rally venues offer plenty of capacity for the large numbers of spectators now regularly drawn by the latest generation of WRC cars plus the prospect of escalating title battles between the top drivers and manufacturers and the presence of two proven British winners – Evans and Meeke.

Sunday morning sees two more forest tests this time set on the Denbigh Moors – including Brenig which will be the points-scoring Wolf Power Stage finale. The morning will also feature a dash around the iconic Great Orme peninsula which protrudes into the Irish Sea to the west of Llandudno. With the Great Orme, a mid-morning visit to the Service Park and the Ceremonial Finish all taking place in and around the resort, Llandudno will be abuzz on Sunday.

In its entirety, the refreshed 2019 route adds up to 22 stages totalling more than 320km (200 miles) of high-octane world championship competition like no other. More significantly, the introduction of Liverpool, Oulton Park and Colwyn Bay will supplement the event’s move to a more dynamic new base in Llandudno, further confirming Wales Rally GB’s position as a truly outstanding and welcoming world class event.

To encourage everyone to experience the unparalleled wonders of the FIA World Rally Championship on its only visit to the UK, visitors are once again offered a number of free-to-view opportunities – at the Ceremonial Start in Liverpool and buzzing Service Park in Llandudno, the event’s lively pits and paddock complex. The colourful Regroup in central Newtown around mid-day on Saturday provides fans with another chance to see the WRC stars and cars close-up at no financial cost.

As a further incentive to inspire the next generation of potential rally fans, all those aged under 16 continue to be provided with free general admittance to all 22 timed special stages when accompanied by an adult.

Early bird tickets are now on sale offering significant savings for those purchasing now. An adult Day Pass provides access to all stages on the selected day and, for all those taking advantage of the current early bird offer, costs £32 for Friday and Sunday and £35 for ‘Super Saturday’. Providing extra value for money, every ticket includes a free glossy programme priced at £9* and booking fees are included.

Adult tickets for Saturday evening’s seafront showpiece in Colwyn Bay are available in advance for just £15 – again those aged under 16 and accompanied by an adult enjoy free admission.

Oulton Park tickets can be purchased for £25 per adult with a £25 Grandstand upgrade option also on offer. Access is strictly via advanced tickets only as no tickets will be available on the gate.

The early bird price of the premium four-day World Rally Pass, ensuring access to all 21 competitive special stages on Friday, Saturday and Sunday as well as Thursday’s pre-event Shakedown, is priced at £109. Befitting the standout value of this prestigious ticket, purchasers will receive a programme, a hard pass and lanyard by post plus a special car pass that offers free overnight parking where available. World Rally pass holders are also offered access to Oulton Park for just a £5 supplement.

Rally Xtra hospitality options are now on sale for visitors seeking an enhanced experience at Sweet Lamb and Colwyn Bay on Saturday and Brenig on Sunday.

Early bird tickets for these Rally Xtra packages are priced at £129 adult / £92 per child (aged 6-15 years old) and offer fans an attractive upgrade opportunity by providing food, dedicated viewing areas, premium toilet facilities, free tea and coffee, commentary and results. Numbers are strictly limited and tickets completely sold out in 2017 and 2018. Details of a further hospitality opportunity at Oulton Park will be announced at a later date.

Full details of all tickets – including terms and conditions – can be found on the official www.walesrallygb.com website.

Hugh Chambers, Chief Executive of Motorsport UK, organiser of Wales Rally GB:
“Every year we engage fresh thinking to add further dimensions to what this extraordinary event offers both competitors and spectators. We feel strongly that by moving the start to Liverpool and Thursday evening’s curtain-raiser to Oulton Park, this year’s Wales Rally GB will not only get off to its most accessible and exciting start for many years but also entice more people into Wales for the incomparable action which follows in the forests. The addition of Colwyn Bay will further assist us in our efforts to showcase this remarkable sport to even wider audiences – a quest that’s endorsed by our decision to move the central Service Park hub into Llandudno town centre. We must thank the Welsh Government, our principal funding partner, for its willingness to embrace these changes and for its ongoing enthusiasm and support which allows us to bring the World Rally Championship to these shores.”

Eluned Morgan, Welsh Government Minister for International Relations:
“Wales Rally GB has been a successful event for the past 17 years, hosted throughout mid, north and south Wales. The event has showcased Wales to the many thousands of visitors who have attended and the many millions who have watched the event broadcast around the world. Our focus remains on supporting the delivery of a successful event this year, capitalising on the Service Park’s move to provide a new spectator-friendly base in Llandudno.”

Councillor Louise Emery, Conwy County Borough Council’s Cabinet Member for Economic Development:
“We’re thrilled to have WRC action throughout Conwy County, in forest stages as well as on the coast – plus, this year, to have the manufacturers and teams based with us is very exciting. We simply couldn’t afford to buy the worldwide media coverage that comes with Wales Rally GB, so we welcome the opportunity to highlight Conwy County is the right environment for great events and to be working with the rally team again in 2019.”

Tim Jones, Natural Resources Wales’ Executive Director of Operations for North and Mid Wales:
“It’s great to welcome Wales Rally GB again. Our forests in Wales have not only achieved almost legendary status in the world of rallying, but they also provide timber for the Welsh economy and fantastic places for people to get outside and enjoy the outdoors. We hope the competitors and spectators enjoy these special places we work hard to look after.”

Elfyn Evans, M-Sport Ford WRT and Wales Rally GB winner in 2017:
“Taking the rally to the heart of a big city like Liverpool is a great way of introducing the sport to a new audience. The same can be said about the opening Oulton Park stage and basing the rally in Llandudno – which will make for an exciting new service park with a lot going on. The event itself will be a typical Wales Rally GB with some really long and demanding days. It’s a real challenge for the crews, and I’m happy to see the return of some night stages, too. It’s part of the DNA of Wales Rally GB and we’re in for another really demanding event this year. As always, the stages look incredible. Wales has some of the best roads in the world, and I’m really looking forward to this year’s event.”