Q: It’s not just new competitors we need, we need more Scrutineers and Marshals, and organisers are getting fewer in number (and getting older) and we need to address that, as well as lowering the cost barrier for newcomers coming into the sport.

I think that’s whether it’s competitors, or officials or marshals, we need to be going to where the young people are and I think frankly, probably people of our sort of age are not the right people to talk to the people who are the kids! We need to, and we’ve got some great young people working at Motorsport UK. I can name half a dozen of them that immediately spring to mind who are the right side of 30 and have got a vibrant excited attitude towards motor sport.

Those are the people we need to reach out to, from schools to universities. Also, getting out to local motor clubs and attracting young people.

I actually think that motor sport engineering courses in this country are an extremely fertile area for us to forge a much closer partnership with those academic institutions. There are hundreds and hundreds of students each year now doing motorsport engineering degrees and yet there is no formal linkage between those courses and Motorsport UK. I’m not just talking about endorsement or ratification, I’m talking why wouldn’t you have everybody that’s on a motorsport engineering course, or similar, has to be a marshal at least once a year, why wouldn’t you make them take a base level scrutineer’s course? There’s lots of things that I’m sure we can do working with the educational establishments to start to feed people into the sport, but to make it work, we’ve got to reduce those barriers to entry. We’ve got to reduce bureaucracy, reduce the form filling and make it more transparent. I think the problem with bureaucracy is that it can lead to a lack of transparency because people like to hide behind ‘the system’ – “That’s the way it is done, if you don’t like it, go and play somewhere else”.

David and myself work on a transparent basis – if you can’t tell the world about it, it probably is not right. We’ve got to be able to have everything set out that everybody knows the way it works, and I think Scrutineering is in that particular area. John Ryan and his team do a particularly fantastic job but I think Scrutineering overall is a fairly loveless task because they’ve got a hell of a job to do depending on the category of racing. It’s a hell of a responsibility in the time they have got to evaluate a vehicle, I think it’s extremely difficult.

Q: Scottish Motor Sports has spent a lot of time and effort time visiting universities and colleges to attract students, what other ways can we reach, entice and encourage youngsters.

The ‘Rallye Jeune’ programme in France is something we are looking at very carefully. I had no idea until recently that Sebastien Ogier and Sebastien Loeb both came out of the Rallye Jeune programme which is extraordinary. It is actually based on an ‘autotest’ format in car parks and I think that’s a fantastic way to get started.

Q: One make championships and formulae provide a good introduction to motor sport but how do we control costs? The Peugeot 205 Challenge was one of the best with a good supply of affordable cars and spare parts, but modern cars have a shorter production life and as each new model is introduced it has an impact on previous model performance and the availability of parts. Richard Burns and Louise Aitken-Walker came through the 205 programme and so to a lesser extent did Colin McRae.

In actual fact I’ve just come out of a technical meeting with manufacturers, about single seaters, and we were having exactly that same conversation about that. That also has to be our responsibility to manage, whether it’s to do with sporting regulations or technical regulations, to contain costs. Cost is the biggest enemy of all of this and but we need to make it sensible otherwise the thing is going to shrink and shrink, and you’re going to end up with tiny grids at circuit racing or tiny fields in rallies if you don’t make it accessible and fair. It’s just obvious. It’s in all our interests to control it. 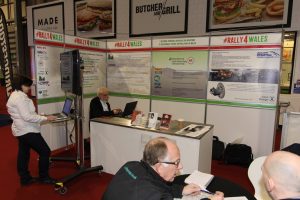 We’re looking at it very closely. Obviously in Wales you’ve got ‘Rally4Wales’ in terms of the contracted party and we’ve got a meeting with them this afternoon. It’s a massively important thing for us to figure out a way through this because it’s going to kill forest stage rallying unless we get it right. The reality is, to quote one of David’s speech comments is that we only use around 5% of the actual forestry routes in this country – if that, and I’m sure it’s even less than that. It’s something we’ve really got to look at very, very carefully.

There’s a lot to do, he added … and then looked at his watch and realised we had over-run our time. Seriously over-run!