Q: What made you jump ship from World Sailing (and no, he didn’t think the joke was that funny either, but he had the grace to smile!) to join the Motor Sports Association? 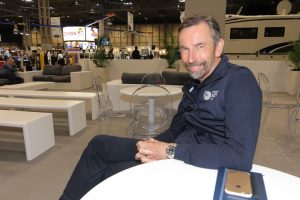 I had ten years working with David (Richards) at Prodrive. I was one of the partners there. Even before that, my father Marcus Chambers was something of a character in the motor sport industry, both as a driver pre-war and post war as competitions manager for the British Motor Corporation and then of Rootes, so I grew up in a motor sport family surrounded by motor sport people, so I suppose it’s sort of in my blood. When I found myself at Prodrive working with David I had the most extraordinary 10 years that coincided with the World Rally Championship title, and with Colin’s (McRae) first title, multiple British Touring car titles and of course we ended up in F1 with BAR Honda.

One of my fondest memories in motor sport was working with Colin and being around him – I think we all have Colin stories that we can tell – a quite extraordinary character, but being driven by him in a stage at the 1000 Lakes will definitely always go down in my memories as my most exciting moment in a car I think.

So you might well ask, ‘If you love motor sport so much and grew up in motor sport why did you leave?’ I think it was one of those moments in time with David where we had achieved so much over those 10 years I felt that at that stage of my career I wanted to go and try different things. I was very fortunate because I didn’t go straight to another job (I had sold my shares in Prodrive by that time) and I was then recruited to be part of the London Olympics so I became the commercial director of Team GB, on the athlete side as opposed to the infrastructure side.

It was natural after that I then left, I had already seen the London Games as a discrete project. It was through that I had met Dave Brailsford, or rather Sir David Brailsford, and he invited me to get involved with Team Sky the pro cycling team. He is a fascinating character and I was very fortunate to work also with Clive Woodward during the Olympics, so working with two of these sort of real pillars of sport, inspirational guys, I learned a great deal about the athlete sport management side of it which you don’t tend to see so much in motor sport.

We now refer to rally drivers and F1 drivers as athletes, but the physical and psychological side has probably not been as prevalent or as important in motor sport as it has in other sports like cycling, so I learned a great deal about that. Then the guy that I had worked with in the Olympics took on the role of Chief Executive of World Sailing three and a half years ago and he invited me to rejoin the team.

So I got involved with World Sailing and this comes back to your original question, which was the relevance to the MSA, as it was. I would say World Sailing, when I joined at the end of 2015, was in an almost identical situation to the MSA last year, which is that it had become hidebound in a regulatory administrative role and had become the ‘Ministry of Sailing’ just as the MSA was the Ministry of Motor Sport and everything that goes with that terminology which is the civil service mentality.

That’s not to deride the people that were doing it, because it’s fundamental. The foundation stones of any sports governing body is that you need to make sure it’s fair, and that the rules and regulations are properly written and applied. It’s safe, particularly in a dangerous sport like sailing or motor sport, and it’s fun.

You need to make sure that those rules and regulations are properly constructed but it’s very easy, if that’s what you focus on, to become bureaucrats. I think, not wanting to get into Brexit right now, but bureaucrats don’t have a good reputation these days – let’s put it that way!

What we needed to do was break the organisation out of that mindset of being the ‘policeman’ of the sport and turn it into being the promoters of the sport. The numbers speak for themselves, I don’t know if you heard David’s speech last January here, at the Sid Watkins (F1) lecture, but David and myself and Colin Clark spent a long time thinking about the content of that speech because it was a real keynote speech. The key point about it was that motor sport in this country, all four home countries, was if we don’t do anything about it, it is in gradual decline and as much as my predecessors might have said – ‘Ah, well you know, losing 2 or 3% of licence holders each year is no big deal’. In 10 years that becomes 30%.