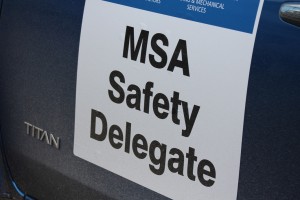 A certain personal column which appeared in ‘Motorsport News’ last week elicited a modicum of interest at the Galloway Hills last weekend. The subject was occasioned by a seasoned campaigner who mentioned in passing that he can often drive for miles through a forest stage these days without seeing a soul and added: “That’s actually quite worrying!”

He was of course referring to spectators as opposed to Marshals and Radio crews. And whilst it would be nice to have Marshals posts positioned within sight of each other all the way through a stage, that isn’t going to happen any time soon. The sport struggles for manpower as it is without having to attract more volunteers.

Anyway, this ‘vastly experienced columnist’ was concerned about another aspect of competitor safety. Over the past couple of seasons he had been made aware of four instances where three cars have left the road in a forest stage and one on a tarmac event and correct procedures appear not to have been followed by other competitors.

The rules are clear, but circumstances can be uncertain. Given the speed that modern cars can travel, some crews may have passed a major incident before they realise a car was off. In that case the crashed crew should be displaying an ‘OK’ or ‘SOS’ board, but suppose they were not able to. They may be confused, dazed or unconscious. They are then dependent on following cars spotting that their machine is off the road, or the Finish Marshals realising there is a gap in the ranks.

On other occasions when a car has left the road, the crew’s first thoughts are usually to get back on the road and in the rally, not display the relevant signs. Their intentions and efforts might be self-evident to themselves, but not to following cars.

It’s a dilemma that many competitors have faced over the years, to stop or not to stop. After all there is a competition at stake.

But there is also human life at stake and there are many competitors out there who may feel some remorse at not having stopped at what subsequently turned out to be a bad accident.

And that is if the car can be seen from the road. Another case involved a car which left the road on a tarmack event, but couldn’t be seen because of the height of the undergrowth around the stage perimeter. The crew were fine, but it was some time before they were able to put their triangle out at the edge of the field.

These events happen in the blink of an eye. Co-drivers have their heads down reading Notes and drivers are concentrating on lines, apexes and braking points. It’s all too easy to pass a stricken crew unless there is a flash of car paint in the bushes and trees.

Despite that, all competitors must assume some responsibility for the safety of fellow drivers and codrivers and be aware at all times of who is running ahead of them and for the tell-tale signs that the crew ahead is in trouble. Especially these days when there are fewer spectators about.

Neither the H&S professionals or the MSA mandarins like the idea of spectators going to the aid of a crashed or stricken crew, but perhaps they might like to re-think their opinions.

All too often in the past, the first folk on the scene of an accident were spectators. Many competitors will have been thankful for this, whereas the counter-argument might suggest that spectators are putting themselves in danger.

Perhaps as part of general Spectator Information issued by event organisers or printed in Programmes or hand-out leaflets, some guidance could be issued about what to do in the event of such circumstances. It might also be wise to include some basic First Aid instructions too.

Prior to the new rules, the old hands were wise in the ways of rally cars and crews and would often dispatch someone down the track to warn oncoming cars while posting another ‘observer’ at the scene to shout a warning to those engaged in recovery operations to cease while the next car went past. And yes, I am aware that there was an incident involving spectators being injured while ‘rescuing’ a crashed car a couple of years back – but did they follow any safety procedure or employ any common sense, or did they just rush into action without thinking?

If such practices were adopted then surely spectators could be used as unofficial warning/rescue personnel till the stage was stopped and relevant Paramedics arrived.

Such a view may be regarded as heresy and foolishness in certain quarters, but it’s worth a thought, surely? Given the nature of the sport being undertaken in remote locations, such help might actually lessen injuries and maybe even save lives.

Of course, there will always be eedjits, and every sport has them, witness the football ‘fan’ who ran on to the pitch to kick an opposing football team player at the Champions League group match last weekend, not to mention the eedjits who scattered broken glass in the path of a road cycling event.

Is education the solution, rather than a complete ban? Can we not include them rather than exclude them? Or is this just a risk too far?