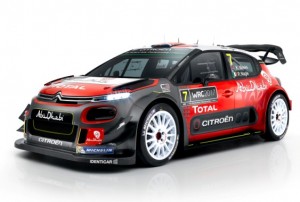 One month before the 2017 FIA World Rally Championship gets underway at Rallye Monte Carlo, Citroën Racing officially unveiled its C3 WRC in Abu Dhabi. Complying with the new FIA regulations, which sees the introduction of a new generation of World Rally Cars, the C3 WRC heralds the return of Citroën, with eight manufacturers’ titles and no fewer than 96 wins to the brand’s name. For the 2017 season, the Citroën Total Abu Dhabi WRT will enter between two and four C3 WRCs for its crews; Kris Meeke/Paul Nagle, Craig Breen/Scott Martin, Stéphane Lefebvre/Gabin Moreau and Sheikh Khalid Al Qassimi/Chris Patterson.

A New Chapter In The History Of Citroën Racing
Since it was founded in 1919, Citroën has always impressed with its capacity to tackle and pull off bold, sporting challenges. In the 1950s, the brand claimed its first major victories in rallying. Whilst never achieving the success they deserved, the Visa 1000 Pistes and the BX 4TC – both compliant with the famous Group B regulations – ensured rallying became hard-wired in Citroën’s DNA from the start of the 1980s.

Kings of the desert
In 1989, the former racing department was renamed Citroën Sport and took up a sizeable challenge, to win the Paris-Dakar Rally. The brand enjoyed success right from the word go and on its first attempt in 1991, won the rally with Ari Vatanen. Three further victories, secured by Pierre Lartigue, would follow in 1994, 1995 and 1996. Kings of the desert, the ZX Grand Raids won 36 out of their 42 races, and were five-time winners of the FIA Cross Country Rally World Cup.

The road to the WRC
The outline of a WRC programme began to take shape with the Xsara Kit-Car, as Philippe Bugalski beat a host of World Rally Cars to win the 1999 Rally Catalunya and Tour de Corse. The ‘Red Army’ then decided to move up a gear and the new Xsara WRC won the 2001 Tour de Corse driven by Jesus Puras. After spending the 2002 season preparing its entry, Citroën began its first full campaign in 2003.

The team made an incredible start, with a one-two-three for Sébastien Loeb, Colin McRae and Carlos Sainz at Rallye Monte Carlo. Citroën won its first Manufacturers’ World Championship at the end of the season, successfully defending the title for the next two years. Sébastien Loeb and Daniel Elena began their incredible series of nine consecutive world titles in 2004.

At the end of the 2005 season, Citroën decided to put its sporting commitment on hold for a year, whilst it developed the C4 WRC. This new car would enable the brand to add another three titles to its competitive record between 2008 and 2010. 2011 saw the introduction of a new generation of World Rally Cars. The DS 3 was chosen to keep the winning run going and it did just that, with two more Manufacturers’ titles in 2011 and 2012.

Off on another world tour
Whilst continuing to compete in the WRC, with lesser ambitions, Citroën Racing took up a new challenge when it decided to enter the FIA World Touring Car Championship (WTCC). Once again, the brand was incredibly successful and in the space of three years, the Citroën C-Elysée WTCCs won 50 races from 69 starts. Citroën and José María López won three consecutive world titles.

As this on-track adventure ends, Citroën returns to the WRC with New C3, a symbol of the brand’s commercial offensive. A new chapter is about to begin.