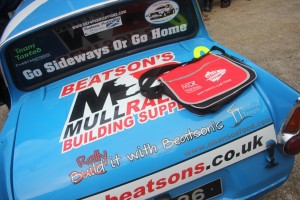 Saturday featured a longer run than usual in daylight with a total of 9 stages, and it was dry, mostly! It also suited McGeehan: “I don’t mind the dark, but the local boys can get away from me – they don’t get as far away in the daylight.” When asked why there isn’t more rallying in the dark over there, Derek said: “That’s when the pubs open!” Obvious, eh? Also getting prepared for Leg 2 was Alan Gardiner in the Mk1. Overnight the team had taped one of those small battery operated fans to the top of the dashboard to try and prevent the windscreen steaming up. And yes they were serious, but they were also desperate! Apparently, it did help.

MacKinnon started Leg 2 as he finished Leg 1, at full chat. It didn’t last long. On the second test, the Subaru lost grip on ‘shiny’ tar, spun, damaged the car’s nose, broke the steering and blocked the stage.

That left a straight two-way fight for the lead between long time scrappers, MacCrone and Duffy. Overnight, the Buckley Boys had changed the clutch on MacCrone’s Fiesta and initially he had the upper hand, but then the Skoda started to top the stage times. “I’m going as hard as I think it’s safe to go in these conditions,” said John, with Duffy having to push that little bit harder in heavy rain. “At least it makes tyre choice easier,” he quipped, “I’d rather have it really wet than patchy wet.”

Gallagher was still holding third place although Bogie had displaced Mounsey for third. “The car was aquaplaning at road going speed never mind rally speeds, there was so much standing water,” said Jonathan. Only one second behind him was McGeehan going well in daylight. Shaun Sinclair was going well after his earlier bump and was up to 7th ahead of Matt Tarbutt. Sadly Stephen Thompson lost out on a potential 10th place finish when the Escort’s rear wheels just slipped off the edge of the road and dragged the car backwards into a ditch.

2005 Mull winner, James MacGillivray’s strong showing also came to an abrupt halt in Mishnish Lochs when the Subaru broke a driveshaft, while Bruce Edwards beached his Darrian nearby and both joined the growing ranks of the retired. Ross Marshall knocked a wheel off the Escort in SS10 and Thomas Gray joined them when he knocked a front n/s wheel off the Fiesta. Billy McClelland was off too, the Subaru spotted taking root in Penmore. Lee Hastings was struggling with a jammed waste gate in the Subaru’s turbo all afternoon, Norman MacPhail was having clutch trouble in the Escort and Fergus Barlow lost time in SS11 when the fuel pump failed and this cost him the class lead – so far. Steven Ronaldson went off on the Hill Road and bent the steering which forced him into retirement.

Jim McDowall was persevering with a rear wheel drive Subaru only after the centre diff failed on Friday night: “It’s handling like a Mk2 Escort,” he said, “it’s great fun.” Grum Wilcock put the Manta off in Gribun bending a half shaft and shattering a wheel but was still going. Nigel Feeney had an alternator bracket shear off the Subaru engine block and had also lost his illuminated gear number display on his flat-shift and like many others, was complaining of poor visibility inside a steamed up cabin. Scott MacBeth’s driving debut on Mull was brought to an abrupt end in SS13 when his Mitsubishi lost power: “I thought at first it was rod through the block, but it could be just a holed piston. Phew!” Fergus Gray thought he was going well in the BMW till he came upon and otter running up the middle of the road: “It took some time out of us, but then it had better wet weather gear than we had!” Gordon Halley got a fright when night descended with a vengeance – all the lights failed suddenly in the Escort on the first stage, but they got them fixed for SS2. Keith Hall was another to get an early fright in the Fiesta when: “The brake pedal went to the floor. The driveshaft had come loose and we lost the brakes, but we got it fixed at Craignure service.” Hugh ‘Uncle Shooey’ Steel had an issue when the Escort’s steering went wonky. A mounting bracket had sheared off and the rack was moving around, but it was fixed at service.

At the Salen control, John MacCrone said: “We had to be very safe. Conditions are really bad with standing water everywhere. We had a half spin on the Lochs, right up on the grass, but got away with it. It was a bit harum scarum at times.”

At the end of the first Leg, MacCrone had a 45 second lead over Duffy, but at close of play on Saturday night, Duffy had reduced that to 36 seconds with fastest times over the final three stages. Not much, but was the tide turning? “It’s really horrible out there, but at least it’s wet, so there’s no worrying about tyre choice. The car’s working well but Barry (McKenna) phoned Roman Kresta in the Czech Republic (ex Skoda works driver) for advice on ‘wet’ suspension settings.” Calum quipped: “Roman asked if I was interested in becoming a factory driver, but I said I was too busy!”

Gallagher was still third, but Bogie had moved ahead of Mounsey although he was a bit concerned: “My wiper motor is slowing up. It’s a Fiat unit and it’s buried way down behind the dashboard. Even if we could get a spare I don’t think we could fix it before the start of Leg 3,” said David. McGeehan rounded off the top six while Shaun Sinclair had moved up to 7th: “Now that I’ve stopped hitting walls!”

On a lighter note, Eddie O’Donnell was spotted using ‘manual’ wipers on his Mk1. The motor had failed. So he had attached a string through his window to the o/s wiper and another string through Stewart’s window and they each took turns pulling, to the refrain – ‘To me, To you, To me, To you!’