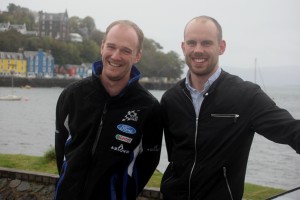 A mere ten seconds separated the winners from the runners-up after 150 miles of stages on the Beatson’s Mull Rally, and the result was in doubt till the end of the final 18th stage. Repeating their 2013 victory, the Ford Fiesta R5 of John MacCrone and Stuart Loudon held off the constant threat posed by the Skoda Fabia Millington of Calum and Iain Duffy. The expected three way fight lost its third protagonist on the first stage when Paul MacKinnon and Daniel Barritt put their Subaru off the road on cold tyres. Thereafter there was little to choose between MacCrone and Duffy, but Derek McGeehan achieved a personal target, finishing on the podium in third place.

The first stage was wet, with heavy rain at Dervaig, and the second one was dry so crews were already having to make difficult decisions. Not only that, the start of the first stage was within walking distance of Tobermory so there was little chance to warm up tyres. That would be crucial as it turned out.

MaCrone opened proceedings with fastest time by 5 seconds from Duffy: “That first one was horrendously slippy,” said John, “I knew i was wet but I compromised on tyres. The brakes took a hammering and the pedal went soft at the end of SS2.” Duffy was a bit more graphic: “It pished down at the start of the first stage, ” said Calum, “and I couldn’t get any heat into the tyres. They dropped to 17psi at the start of SS2 and it took a while to get any heat into them.”

But there was no sign of MacKinnon. “I got caught out under braking,” he said, “on cold tyres it just slid, put one wheel on the grass, and I was off. My own fault. Call it ‘ring rusty’. On another day I would have got away with it. On a more positive note, I picked a good spot to go off. No damage and we got it out easily.” Even so, that earned him a maximum time and dropped him to 138th place overall.

Shaun Sinclair suffered a similar fate: “Cold tyres, slippy tar – and driving beyond my ability,” he said. The Mitsubishi struck the wall at Bakery Corner damaging the front o/s corner, but he managed to keep going. Donnie MacDonald was another to succumb to cold tyre syndrome, smacking the side of the Lancer. The impact pushed the door in and struck his arm which he then had to have strapped up to finish the rally.

On the next stage, the tortuous 14 mile run over the Hill Road and down Loch Tuath, MacKinnon asked the Start Marshals for an extra minute. The man was on a mission. He took half a minute out of Duffy. The fightback was on.

Third quickest over the Mishnish Lochs opener was Daniel Harper in the BMW MINI and he was fourth quickest over the next one. He was lucky though: “I nearly backed it into the cross roads at Glen Gorm,” said Daniel, “the tail stepped out. Then we broke a wheel against a bridge parapet near the Fish Farm. ” That caused a severe vibration: “It was shaking like a shitting dog,” he added, “but the tyre didn’t go down. We slid fully off the road in SS2. All four wheels on the grass, I was auto-crossing!”

Less flamboyant, but carrying no less speed was local driver Lewis Gallagher. First time in the Subaru since last year’s Mull he was right on the pace. Sadly, that battle ended abruptly in the fourth test when the Harper MINI broke its throttle cable and after temporary repairs, the clutch failed. In the second Minisport MINI, John Cressey had his son Martin in the co-driver’s seat, and was somewhat disparaging about his own pace: “The little boy has had loads of time to sightsee,” he said, before Martin countered with: “His ability to drive slowly is very impressive.” With family bonding like that, one wonders why there are so many family break ups, eh? Speaking of Minisport, the third car in the entourage was off in SS1 too: “We just slid off and broke the front suspension,” said Martin Page, but at least he got out and kept going.

John Cope commented on conditions too and given his propensity for giving the Subaru a quick clatter against something substantial on the opening stage each year, his was a rather more cautious approach: “It was weird. On one corner there was grip, and on the next there was none. The second stage was better .It was dry. In fact it would have been better had we done that one first!”

On his third visit to the island Derek McGeehan was battling with the Subaru of James MacGillivray, Jonathan Mounsey in the Mitsubishi and Tristan Pye in the Subaru, with David Bogie getting in on the action later. A smile flickered on McGeehan’s face at the end of the opener: “We got caught out on slicks on that first one. That settled my nerves though,” then added, “we enjoyed the second stage.”

If anyone thought the days of rear wheel drive were long gone and four wheel drive was the way to go, David Bogie provided the perfect antidote. His time over the first one wasn’t great: “We went for the hardest tyre on the rear,” he said, “and just couldn’t get heat into them. That’s the slippiest conditions I have ever encountered in a Mk2.” He should know, he’s rallied in Ireland! Speaking of rear wheel drive, Curly ‘Toot Toot’ Haigh was quick over SS2: “That was brilliant, just one problem, Sally (the co-driver) was going too quick. I couldn’t keep up with her!” Not so fortunate was Keith Robathan who got a Maximum when the Escort’s tail end out slid out and over the road edge, beaching the car on its exhaust just 4 corners in from the Start.

On the final stage of the night, Pye’s fuel pump started to fail, the car developed a misfire and he switched off rather than risk the engine. Tony Bardy didn’t even get that far. The Ford Focus developed a gearbox fault on the downshift and he was out on Stage 3: “It was getting dangerous,” said Tony, “you didn’t know if you were going to get a gear – or neutral when you needed to downchange!” Billy Bird retired the Chevette in the next stage also with a broken gearbox, but he still managed a chuckle when he recalled his run through the first stage: “At my age you don’t have near misses. You either crash, or get through.”

By close of leg 1 MacKinnon was back in 12th place after a run of 4 fastest times, with MacCrone leading Duffy by 45 seconds. “That was a clean night, a clean run, nothing spectacular,” said John, “I was just keeping out of trouble.” Mind you some folks’ idea of trouble is rather different to us more ordinary humans: “The car is geared for 108mph and we were flat nearly the whole way through the Glen,” added John, “so we were losing time to the bigger cars.” Duffy wasn’t so fussed either: “Put that down to bad tyre choices,” he said, “the car is good but we’re still working on suspension settings. Tomorrow is another day.”

Gallagher was already 2 minutes behind this pair but ahead of Mounsey and the top 2WD machine, the Ford Escort Mk2 of David Bogie: “I’m a lot happer now,” said Dvaid, “There are so many bad bits out there, it’s all about finding out how hard you can attack. ” His wasn’t the only 2WD machine in the top ten. Stephen Thompson, the number 43 seed and Class C leader, was having a marvellous run, despite a bit of trouble on the final stage of the night: “The battery light came on just after Dervaig,” said Stephen, “We had to switch off some of the lights and we lost the power steering.”

He wasn’t the only one in trouble. Matthew Tarbutt had put his Subaru into the top ten, but only just, and reported a quite unbelievable tale: “We split the sidewalls on the two front tyres. We didn’t hit anything so we don’t know what caused it.” With no service between the stages, what did they do? “We squeezed superglue into the cracks then put tank tape over it.” They weren’t kidding, I had a look! Nutters, eh? But it worked, they reach the final Control at Salen.

Cressey was another in power trouble: “The alternator isn’t working, we can’t use more than 3500rpm as it cuts out the power steering. We got passed by 2 cars in the long one, but we’ll get it sorted for tomorrow.”

Alan Gardiner reported a bit of a misfire through the 4th stage but it seemed to clear itself before the final one and Curly Haigh was chortling like a happy smurf when he pulled into Salen Control and Sally leaned across to say: “He’s beating me now, he’s driving faster than I can get the Notes out,” with Curly adding: “We’ve been dancing in there.”

Donnie MacDonald was bearing up well with his sore arm: “I’m steering with my left hand and just holding the wheel with my right when I have to do something else.” Just outside the top ten, Pete Gibson said: “We had a terrible first stage, but getting better since then. We have caught the car in front in two of the stages so far.” Lying second in Class C behind Chadwick, Ross Marshall had his Mk2 well wound up arriving at Salen in 15th place overall: “The two wee ones were right good on the softer tyres but half way round Calgary they were starting to go off!” His Dad, John, wasn’t faring so well. The Subaru was spotted parked up in SS5 with electrical problems but got going again after John Rintoul had given him some tie-wraps! No, I don’t know either.

Robert Mathieson was grinning at Salen: “I didn’t think there was enough room to get the car sideways between the armco and the rocks in Calgary – but there is!” David White was lucky too: “We clobbered a bank in that last stage, broke the bottom arm and had to stop and change a smashed wheel but we managed to limp out the stage and get to the Control.” Cameron McLean also had to stop and change a punctured wheel, while Dave Holland thought it was “frightening” at times when: “We had a few moments on the gravel (pulled out by corner-cutters) and were sideways where we shouldn’t be.” A point echoed by the similarly Mk2 mounted Neil Morgan: “We got 2 wheels on the grass at the top of Calgary steps and then we got a bit flakey coming down the other side.” Beefy Fraser finished the final test with no lights on the Avenger: “The switch melted, but we’ve got a spare.”

But if you’re looking for a hard luck tale, try this one. Gareth Hooper’s Opel Manta broke its cam shaft in the final stage of the night. When they got back to the digs, they stripped the head off it, replaced it with a standard camshaft and rebuilt the engine ready for the Super rally on Saturday. Some folk just don’t know when to give up, eh? Another joining him on the Super rally was Greg McKnight. The intercom and map light failed on the first stage but worse was to follow when the Escort slipped off the road. It was only the rear wheels which got stuck over the road edge, but then the diff failed on the final test and was replaced ready for daylight.