Unbeknownst to his friends and rivals, Jock Armstrong was somewhat handicapped, or to be more accurate, footicapped at the weekend. Earlier in the week he had been at work and was transporting a manhole cover and frame to a job. Naturally, Jock being Jock, when he got there, he tried to lift the bluidy thing out of the back of the pickup on his own. The manhole cover fell off and landed on his foot breaking his right big toe.

Former Subaru Impreza WRC driver Reay MacKay appeared at the Grampian Stages with the ex-Andy Horne Ford Focus WRC. First time out in the car he was running in 18th place after five stages before sliding off the road on the final test. “I’ve been a Subaru fan for years,” he said, “but this is different league. I can’t believe how much traction you can get. I just need to build my confidence.” Reay also revealed a little bit of insight into how the deal came about: “I first approached Andy at Speyside last year about buying the Focus, so it has taken a full year to do the deal. Every time we met up we got a bit closer, but you know what Andy’s like!” (Yes, and we know what Reay is like too – pot and kettle, comes to mind. Ed.) Andy has taken Reay’s Metro back as part of the deal but Andy has no plans for it, as yet: “It’ll be a bit of a project,” he said.

The 16 mile test in Drumtochty proved universally popular, but prompted Barry Groundwater to observe as he exited the stage and headed towards Drumelzie: “That rascally Weston (Snr)! We were straight out of Drumtochty and into Drumelzie with hardly time to draw breath.” He was referring to Event Director Dave Weston Snr’s compact route which kept the competition on the boil throughout the day.

John Wink faced a hectic race against time to get his Scottish Rally accident damaged Mitsubishi ready for his home event, but was forced to retire in Stage 4. He burst a brake pipe in Stage 3 and then lost all his brakes in the following test. Trying to fix them was one Ken Wood Esq, but as time ticked ominously away Dom Buckley Snr stepped in to help. I don’t what was creaking so much, it was either the rear suspension or two pairs of elderly knees. 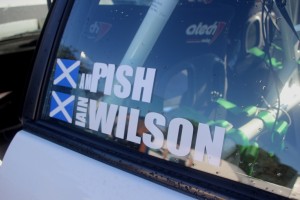 Another driver fast running out of time before the Grampian was Iain Wilson. “We had an all-nighter before the Solway Coast,” said Iain, “the car was not braking right. Colin (the man should be a Saint. Ed.) Telfer found the diff wasn’t working so took out the gearbox and changed the electronic module and put it back in. No better. So it was gearbox out again and replaced some mechanical parts, and it was fine.” The downside was, that he either ran out of money or ran out of time. Whatever, he turned up at Scrutineering with Mark Fisher’s name on the car as co-driver, but Keith Riddick was on the Notes. Anyway, cheapskate rallying decided to try and re-use some of the letters from the Mark Fisher name to make up Keith’s. It didn’t work. Fortunately, young Keith has a stout sense of humour.

You can always spot a Scott MacBeth car in a car park. Various shades of bright blue and as beautifully turned out as a Concours entry. The Corsa was a credit to the whole team, but the Mitsubishi is taking a wee while longer to turn around. It also looks good on the inside but underneath a great deal of refettling is constantly underway. He only managed 4 miles on the Scottish before the car stopped: “It was corrosion inside the main electrical connector under the bonnet,” said Scott, “it took ages to find because sometimes it was OK. We stripped it out, soldered the wires and did away with the plug. We also changed two other plugs as well! Then when we got here last night, the starter motor failed as we drove the car off the trailer!” Scott also revealed he has plans to do Beatson’s Mull and will run DMack Tyres as part of the Junior DMack tyre points and discount scheme.

Michael Binnie appeared at the Grampian with bigger discs on the front of the Mitsubishi and new brakes and new driveshafts all round after his Scottish troubles, Angus Lawrie had fitted a new pinion shaft to the Corsa to hopefully cure his recent spate of gearbox troubles, only to suffer alternator failure, and when Calum Fraser took his Peugeot off the trailer the night before the rally, there was oil all over the place. A driveshaft seal had gone and with no time to replace it, did the rally, topping up as they went along.

Cakes, cakes and more cakes. Bruce McCombie and the team survived the long and arduous trip to Milton Events Field (he lives 5 miles away in Banchory) for the Grampian Stages, but the whole McCombie family had put in a huge effort alongside the Stonehaven & DMC volunteers to get the venue ready to host the rally. Bruce also admitted he had to pass his Mother’s house on the way. As usual, he stopped off and loaded the van up with 12 various sized boxes of home made cakes. No bacon and eggs for this team, it’s all about the sugar rush. Under great duress I was invited to sample the boys’ favourite, a sort of soft, gooey and chewey lump of succulent flapjack deliciousness. Who needs a trolley jack, I could have lifted the front end of the car on my own.

Although there was a huge turn-out of spectators at the specially created spectator viewing areas, constructed by local Forestry Commission staff, John McClory was left to rue the new rules regarding limited spectator access. “Where we went off there were only two spectators standing there, and there was no way we could get the car back on the road.” Adding insult to injury, as John and David (Hood) clambered out of the stricken motor, they heard one of the spectators exclaim: “Oh, look, it’s Jack and Victor.” Some youngsters have no respect these days, eh?

Speaking of veterans, Bill Davidson came up with the Quote of the Month: “Rallying? I’d be cheaper being an alcoholic!”

Another oldie giving a youngster a hard time was Brian Watson. Speaking of co-driver Cammy Fair, he complained about feeling too hot in the car all day: “He’s ginger you see. It draws heat into the car. I’m telling him to dye it.” Fortunately Cammy is made of stern stuff – and at least he’s got hair.

Laura Marshall had been drafted in to co-drive for Greg McKnight after his Dad Chris had complained of being unwell during the Scottish. Turns out, Chris had bumped his head at work the week before the rally, and a CT scan had showed up a little bit of bruising. So he wisely stepped down for the Grampian. Mind you, it didn’t stop him heading off to Turkey the week after the Grampian for his annual holiday!

Duncan Campbell had an odd problem with his Subaru: “Look,” he said, and showed me putting the ignition key in the car and turning the engine over, “the key just keeps popping out every time I shove it in and start the car.” It was weird, so how did he solve the problem? At the rally finish ‘the fix’ was easy to see, he had wound tank tape around the key and steering column. You don’t get that in a Haynes manual.

Gallantry is a lost art these days but you’d expect better from the older generation. Sitting beside Gina Walker in the Citroen C2, Richard Simmons calls the car ‘Gina’ as he explained: “The car must be a woman – it’s temperamental and it’s always overheating.”

It pays to be observant and wary at all times. Steve McGregor was lucky (or skilful?) to finish the Grampian after encountering a tourist on one of the public stretches of road between stages – on his side of the road! Fortunately he missed him but nearly swapped some paint.

With the enthusiastic support of sponsors Coltel Communications, the ‘tented village’ which combined all the Rally HQ and Results team functions within the service park at Milton Events Field just outside Banchory proved very popular. It also ensured an excellent turn-out at the after rally prizegiving with competitors able to load up trailers and park their vans easily, unlike traditional hotel style finish venues which offer restricted parking for a championship rally entourage. As clubs struggle to find suitable venues in future, it’s worth a thought.

Now this is a difficult story to relate, so stick with it, but it did cause hilarity within certain ranks of the north east cognoscenti. In a bid to wind-up Peugeot 205 pilot newcomer David McLoughlin (car 78), Adrian Stewart had entered Duncan Cameron in his own Peugeot (car 79), only he didn’t. Now as we all know, Duncan is a bit handy when it comes to Peugeots and FWD, so all week, poor David was being wound-up mercilessly by ‘his friends’ about how soon he would have to pull over on each stage to let Duncan go past. Knowing what was going on, the rally organisers had accepted an ‘entry’ from Duncan so all the paperwork showed that Duncan was running behind David. Come the day of the rally, Duncan drove Adrian’s car through Scrutineering and then lined up behind David at the Milton Events Field pre-start on Saturday morning. To keep the pretence going, Duncan had even gone to the extent of shaving off his beard, so that when he swapped over with Adrian at the Crathes Castle official Start, it still looked like ‘Duncan’ in David’s rear vision mirror. All the way through the first two stages, David’s bum was nipping as he expected Duncan to appear through the dust at any moment. It was only when they got to first service and Adrian took his helmet off, did David realise he had been well and truly had. With friends like that, who needs enemies? 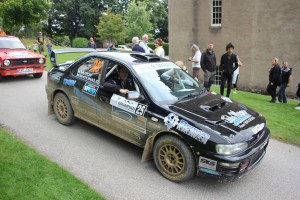 Scott Mutch heaved a big sigh of relief at the rally finish. There wasn’t a bump or a ding on the car, as he explained: “Greg (McDonald, his co-driver) is getting married to Sophie (Thomson) on the 10th of September – and this is the wedding car!” Apparently there are a couple of conditions. He won’t be allowed to keep the mud on it, to keep it in character, and he will have to swill out the interior as well, before the big day. Just one word of advice to the bride though. Get yourself a big boiler suit before you climb into the car and then take it off when you get to the church. Huge congratulations to Greg and especially to Sophie – but how you are going to manage and keep it clean I have no idea! Mind you, you will have had plenty of experience with that pair of rascals up till now.