First off. An apology. To Iain Wilson and Derek Connell. Two of my notebook pages got stuck together after the Solway Coast and I missed them both completely. My own stupid fault. I could blame the rain for making them stick, but it didn’t rain till the rally was finished, or I could blame the fat dripping out of a pie, but Marchbank pies are not at all greasy, or maybe I could blame sticky fingers after a portion of Marylyn McMath’s tablet – gawd it’s so finger-lickin’ good. 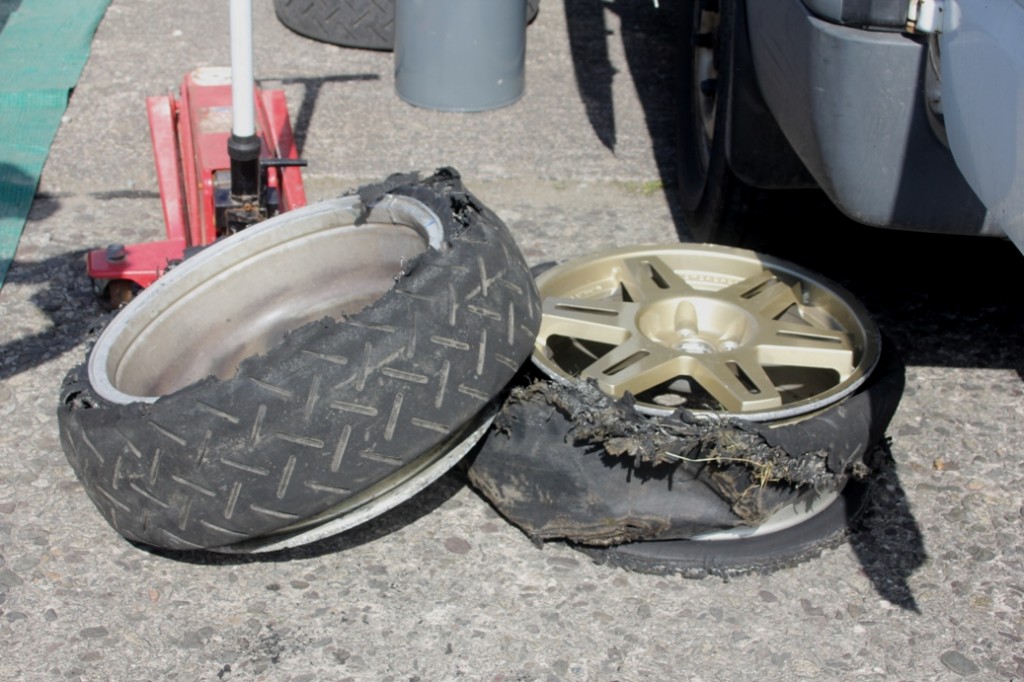 I digress, back to Iain. His day got off to a bad start. Two punctures on the first stage forced him to stop the Subaru and get the spare out to change one of them so at least he could get back to service. The result was a Maximum time penalty and a plunge down the leaderboard losing over 4 minutes to the leaders. Mr Angry then set about making up lost time. He was actually fourth quickest on SS2, SS3, SS4, SS7 and fifth equal fastest on the final stage. 27th overall is poor reward for such effort. But that’s rallying, eh?

Derek had a difficult day too. On the second stage he disappeared off the road at 80/90 mph at a L9 ending up in a field, and then noticed smoke rising from both sides of the car. Fearing the worst i.e. hot exhaust and nearly dry grass, he leaped out with the handheld ready to fight the fire. But it was only smouldering so he jumped back in the car and reversed out: “If I had still been driving my Corsa, I would never have got out of that,” said Derek, “but with four wheel drive I got back in the rally.” He finished 40th overall. On the other hand, if he had still been driving his Corsa, he wouldn’t have gone off the road at 80 odd miles an hour, would he?

Mark Grierson looked ever so slightly nervous prior to the start of the Solway: “This will be the first time on Notes with my Dad – and probably the last time too,” he laughed. However, taking his co-driving role seriously he had arranged to have some practice on the Scottish Rally a few weeks back. He teamed up with Alan McMorran in his Avenger with his Dad’s advice ringing in his ears: “He won’t listen to you anyway, so you can just practice the Notes and match the speed. At least you’ll get your eye in, Alan’s a steady, canny driver.” So now you know.

If you thought Steve Retchless lovely looking Mk2 was familiar, it was the ex-James MacGillivray, Roy Jervis built car last used on Mull. The 2.5 has been replaced with a 2.4 Duratec, but it still has about 45hp more than Steve’s old car although hopefully more reliable. That would appear to be the case, this was his fourth event in the car. “It’s an absolutely bonkers engine,” said Steve, “but I’ve still got my yellow car in case this is too much for me!” So why did he buy it: “I got beat by a couple of young fellas last year,” he explained, “the older I get, the more power I need.”

Running Course Car duty at Solway was Scott Peacock, but not in the Peugeot. He bought Linzi Henderson’s MG ZR a couple of years back and has spent the intervening months, stripping it and rebuilding it. The result? A real credit to the young tearaway, I mean, nice young lad. Even so, it was only finished on the Friday afternoon after Colin Telfer stepped in to lend a hand during the week. But it begs the question, how did it get its MOT if the guy who was running the MOT station was doing the rally? Anyway, I’m sure it was all perfectly legal, but Keith Riddick was a help too and Scott’s new car runs the same suspension as Keith’s although the engine is a bit closer to standard spec than Keith’s.

Speaking of tearaways, Mark McCulloch can be a wee rascal at times too. Despite the fact that David Hardie is one of his main rivals, he’s also a very good friend and part sponsor. In fact, Mark was using ex-Hardie tyres on his own car to win at Solway and he was at pains to point out that he helped to fulfil one of David’s wishes last weekend. “On the first run down the glen through the trees this morning it was really wet and greasy and I pulled some rocks out for David. He’s always saying he wants to do a gravel event, so I was just helping him out.” With friends like him, who needs rivals?

I shouldn’t really, for he is an awfy nice young man, but for years I have pulled the leg of ex-Junior 1000 rally driver and sometime co-driver Harry Marchbank. His Dad runs the award winning Marchbank Bakery with wholesale and retail outlets throughout Dumfries & Galloway so I keep pestering Harry about his pies. I was just about to give him a hard time at Dundrennan when he thrust a poke into my hand – with 2 pies in it. The rascal. I’m now too embarrassed to tease him again. Truth be told, I’m no stranger to a Marchbank pie. During the summer months, I go for bike rides down the Daer Valley from Elvanfoot to Thornhill, where I stop at the Marchbank bakers’ shop, buy a pie and a tea and sit on the bench across the road and watch the world go by for wee while, then it’s back on the bike up to Sanquhar through the Leadhills to Crawfordjohn and home. Ye cannae whack it.

After a puncture on the first stage, Stevie Hope was flying in the Escort until a rear suspension link broke on the fourth test. That resulted in 29th overall. An observing Big Hamish commented: “That’s what you get with a Millington and Michelins.” Hamish Kinloch didn’t get far in his own Escort either when a fuel pump failed. The preparation expert then revealed that he always changes the fuel pump on customer cars at the end of each season – but doesn’t do it to his own car: “That yin must be at least 5 years auld, and it wisnae new when I fitted it.” Chris McCallum was another to get a puncture in his Escort, but when his own jack wouldn’t lift the car clear of the ground, Willie Nelson sportingly loaned him his. Chris was later forced to retire the Subaru when the power steering pump failed and started spraying hot oil on to the turbo. Wise move. As for Willie he managed to bash the driver’s door, bonnet and n/s front corner on his way to 25th overall in the Subaru. Not so good for Jimmy Allan, he cowped the Subaru in the sixth test. It’s not too bad, but it’ll keep a panel beater busy longer than a 12 pack of caramel wafers. George Fell retired his Ford Puma in the sixth test but was full of praise for Mum, Louise, who was using Notes for the first time.

As mentioned in the main report, Graham Bruce who finished 16th o/a was losing oil over the early stages and when pressed on where it was coming from, sheepishly admitted: “There’s three bolts loose in the gearbox!” Brian Pringle’s rally was short-lived when the Subaru broke its rear diff on the second stage, a fate which also befell Ewan Murdoch’s Ford Focus, but he didn’t even get that far. It failed on the first stage. James Gibb didn’t get much farther in his Fiesta: “Half way down the long straight in Stage 4, it lost boost. I heard a whine and then no power. I don’t know what’s up” he said. Chris Marshall reckoned he hit a deer with his Mitsubishi on S4 but didn’t appreciate being asked who was passing who at the time. Joel Davidson was last man home at Solway after he broke a driveshaft in the wee Nissan and then lost the use of 5th gear.

Full marks to Chris McKnight for grim dedication to the cause. He was co-driving ‘the boy’ Greg but as he often admits he prefers gravel to tarmac. Now he has more reason to prefer gravel because the g-forces under cornering and braking in the Mitsubishi are a lot more severe than the Escort. By the fourth stage it was getting to him, and inevitably, his early morning breakfast tried to make a bid for freedom. What did he do? He swallowed it, and hung on till the end of the stage. That’s commitment, eh?

To read the round up of all the capacity Classes: [Class Roundup]