An interested spectator at the Mach1 Stages was one Calum Duffy Esq from the Parish of Kilninian and Kilmore in the north-west of Mull. But he wasn’t just there to see the action he was there to catch up with Barry McKenna of Densport from the ancient County Londonderrian Order of Chariot Builders and Horsepower Exchangers. Although rumour has it that Calum bought a Skoda Millington last November, he hasn’t actually physically touched or even seen the velocipede as yet! “The car went straight to Barry’s” said Calum, “he’s building it car and converting it from LHD to RHD so this is a chance to catch up face to face.” Truth be told Calum actually took the weekend off and had a wee bit of break on the Mull of Kintyre with the family – and there just happened to be a rally on, and Barry McKenna just happened to be competing! Would you believe it? More to the point, did the Missus?

Tyre talk was the order of the day, or both days in fact, at Campbeltown and with the weather changing faster than a kick boxer’s dental records the matter of tread and compound boiled down to pure luck or divine guidance rather than anything to do with informed choice or calculated guesswork. Picture the scene, our hero, one Shaun Sinclair Esq (for it was he), approached the Andrew Wood tyre wagon to inspect the seller’s wares and seek counselling prior to acquisition of definitive patterns and rubber mix. Having inspected and deliberated he opted for a set of 9s, only to be told by Andrew that John Rintoul had just bought a set of 7s. “He should know what he’s doing,” thought the bold lad, “he’s been around a lot longer than me and knows more about this tar stuff – so I changed my mind and bought a set of 7s too!” Rubbing salt into the wound, Shaun took time out of John on the next stage!

Speaking of tyres, Iain Wilson had an easy choice: “I had some old tyres lying outside the garage and brought them along just as spares. They’ve been the best choice of the day!” But there does appear to be strains in the ‘auld fart driver’ and ‘young keen co-driver’ relationship. The trouble is, young Keith Riddick is quite a handy driver in the BTRDA 1400 Championship, as Iain explained: “I’m beginning to get nervous now. He keeps telling me to tidy it up. It’s like a schoolteacher telling you to do better. At one point he even said ‘tidy it up – please’. I mean I’m driving a Subaru, he drives an MG, so what does he know. But then again, maybe he has a point. I do like driving this old bus.”

Due recognition and congratulations must be paid to Stuart Walker. He completed the whole 12 stages with the same front bumper and air dam, a most unusual occurrence. He did have his troubles though. Then Skoda had electrical gremlins and even though he changed the gearbox sensor and camshaft sensor they persisted: “The gearbox sensor was telling the camshaft sensor that we were doing 300 mph – and we were parked at the time.”

As we all know, Brian Watson is a bit agricultural when it comes things mechanical, and when a rosejoint snapped on the bottom of his Mitsubishi Lancer’s front suspension it looked as though he was out of the running and he didn’t have a spare. Somehow he found a local tractor repairman who ground down the broken bits and welded it all back together. It wasn’t pretty, but it worked – for a wee while.

Stuart Paterson retired from the rally with an overheating problem. He tried a couple of runs without the thermostat before deciding that it must be the head gasket so the Subaru was put on the trailer.

Freddie Milne cantered round the airfield all weekend with a ‘For Sale’ sign on the windows of his rally car, but it wasn’t his Mitsubishi. He appeared in a Honda Civic. “I took it back in part exchange for my Subaru,” said Freddie, “You know, I’m really quite enjoying it. If I’ve still got it by October I might just do Mull in it!” Even when he broke a driveshaft on Saturday afternoon, he was still smiling: “A driveshaft for this thing is only 96 quid, it’s 450 for a rear driveshaft for a Lancer.”

This one will get me into trouble. We all have embarrassing moments that we’d rather keep from family and friends. Well, David Kirkpatrick had such a moment at the Mach1. He took three jerry cans down to the filling station to fill with fuel – two with petrol for the rally car and one with diesel for the van. You’re already away ahead of me, so yes, you’re right. Come the morning of the rally he topped up the tank in the BMW and then wondered why the ultra reliable beast (till this point) wouldn’t start. Needless to say, it wasn’t a diesel engined BMW.

On the basis that you’re never too old to learn, I overhead one ‘team manager’ shouting at his driver’s co-driver to get under cover and out of the rain. I was informed that if you get a race suit even damp, never mind wet, it can lead to condensation inside the rally car. And that was another big problem at Machrihanish. So remember that in future.

If you think airfield based tarmac events are an easy option to real roads, think again. As Escort mounted Stephen Thomson (11th o/a) observed: “It was scary at times on the straights. You could feel the rear end snatching at times, because you couldn’t see the puddles. The surface just looked black from the driver’s seat.” And this at well over 100 mph. 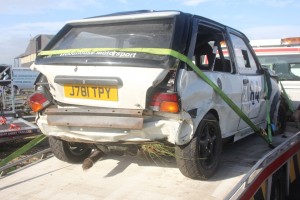 Unplug the exhaust and it will be fine!

Gerry Kilmurray‘s rally didn’t last long when the Astra sheared the front n/s wheel studs, and although he finished, Andrew Yates missed out two stages when the fuel pump failed on his Peugeot 205, but it took a while to track down what the fault was. James Gibb had a good run into 13th place but there was a noise coming from the Fiesta’s transfer box on Saturday evening so the oil was changed overnight and James Campbell‘s Mitsubishi retired on the Saturday when the clutch broke. Gavin Gray retired his Citroen ZX after alternator trouble and he ran out of batteries and Gary Ross retired his MG TF when it pulling a tracking arm out of a bush: “It’s tucked right up inside the bodywork. I can barely see it let alone reach it,” said Gary. Matt Ratcliffe‘s retirement was easily explained: “The engine blew up on the 9th stage” and Brian Pringle‘s outing in the Subaru was curtailed with a broken rear driveshaft: “It was mangled,” he said. And Kevin Ronaldson‘s fun was interrupted ed with a broken injector wire in the Metro. As for Paul Hunter, his Metro was left looking rather more second hand after an early morning roll on Saturday.

Cameron McLean had an excuse for giving the Escort an airing in Kintyre: “I’m just using up some old tyres to free up some rims for Mull.” Bit of forward planning going on there, eh?

George Auld thought he was out on Saturday after six stages with gearbox failure then went for a Chinese that night in Campbeltown. At one point during the meal he was overheard by an adjoining table and who promptly offered him a gearbox. He was back out on Sunday for the Trophy Rally. Nice one boys.

It was good to see Jimmy Allan out again but as ever, the old-timer knows a few more excuses than the weans. For instance, he was spotting spinning off into the long grass: “I hit one of those lorry tyre markers – and then went to inspect the hay. It will be ready to cut in three weeks.”

Norman MacPhail had a lucky escape. Approaching the start of SS9 he noticed the oil light flicker and thought he’d just check. Good job he did. When he pulled the bonnet he found the Escort’s oil filter bowl was loose and was spraying oil everywhere. Fingers crossed he’s saved the engine.

Robert Marshall had a lucky escape too: “On the tenth stage I slid off on to the wet grass. I was sitting there hanging on at 50 mph just waiting for ‘the hit’ – I had heard there were concrete things hidden in the grass. But there wasn’t. Lucky.”

Local driver Ally Galbraith went home on Saturday. When the panhard broke on the Escort Ally and Del reckoned it would be easier to trailer the car 50 miles back home to Lochgilphead, do the repairs and the welding in the garage and then drive back the fifty miles for Sunday. Sleep? That’s for kids.

I thought Jim McDowall was looking quite pale in the face at the weekend. Normally his ruddy complexion marks him out as an outdoors man, but he wasn’t ill: “It’s Jamie’s first time in the Subaru,” said Jim referring to number 1 son, “and I’m co-driving.” Seriously though, Jim was well chuffed with Jamie’s progress as he romped to 52nd place and no dramas.

You know the old saying “You can’t keep a good man down”? How about an update – It’s even harder to keep an eccentric down. Sandy Arbuthnott has starred in these pages for many a year with his trials and tribulations centred on a Metro 6R4. Then he turned up on the Speyside a couple of months back in a Mk2 and finished an almost troublefree 54th. More to the point he fair enjoyed himself. But like beating yourself over the head with a tin tray – it’s great when you stop, he turned up at Campbeltown with his latest rallying device. A Ford Focus WRC machine with a flat four under the bonnet! First time out in the car he got two stages under his belt before the front diff failed: “It was going well up till then,” said Sandy, “It’s easier to drive than the Metro and a lot quieter, but I think it’s chipped a tooth.” And off he went home – with a smile on his face. If you could bottle such enthusiasm you could win world championships.

As you will have seen from some of the pics on previous Facebook posts and in the Blog, Andrew Gray, who was the piper at the rally start, is a big lump of a lad, the kind you would avoid on a dark and quiet Friday night in Glasgow. The kind you would think would drive a beat-up but quick Audi or BMW. Nope, his road car at the weekend was a bright yellow Citroen DS3 with furry dice dangling from the interior mirror. Kind of puts a dent in the tough guy image, eh? 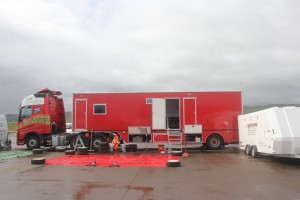 Far be it from me to bring a bit of crudity to these erstwhile biblical ramblings, but I only record and report, I don’t judge or criticise – much, but when Murray Coulthard appeared with a borrowed ‘service barge’ he was ripe for a bit of banter. The wagon in question was an ex-Dumfries & Galloway Breast screening unit towed by a Volvo FH460 truck. Used by his Dad when attending vintage truck gatherings, Murray and his entourage had borrowed the unit to save on hotel bills for the weekend. And as the big red equipe rolled into Machrihanish airfield, Dangerous Des and Garth spotted the yoke and immediately christened it the ‘titty wagon’. Boys will be boys, eh?