Allan Paterson complained that he wasn’t allowed into the Driver’s Briefing prior to Crail because the big shed was full of hay – perhaps that fact that he was smoking a fag at the time didn’t help his cause!

Beefy Fraser has perfected the ideal way of not getting himself on the telly. He doesn’t like being interviewed with a microphone and camera shoved in his face, so he makes sure that whatever they record they can’t broadcast. When Kirstie Marshall and the Special Stage TV crew approached him at Crail, his opening gambit to Kirstie was: “Hello Mary Doll, did the ointment work?” There’s just no comeback to that, is there?

You’d have thought Stephen Hay would have been moderately pleased with second in class, but he wasn’t: “I broke a driveshaft in the first stage – and this was one of my ‘unbreakable’ shafts,” he explained, then he had an attack of the rear brakes binding on: “but I fixed them. One hit with a big hammer frees them off.” Just don’t tell the Vauxhall dealer.

Lindsay Taylor was an early retirement at Crail, when a bolt broke on the gearbox mounting, which caused the engine to drop stranding the Fiesta mid stage 1.

Apart from a jammed-on handbrake on one stage, Gavin Lloyd had a good run in his rebuilt Nova which had suffered quite a bump at the previous Ingliston round: “Kenny Barbour at Oban did a sterling job on it,” said Gavin, “but the biggest problem we had after the shunt was getting the engine started. We tried everything and changed everything, and then found the problem. A broken rotor arm.” Dohhh!

First timers, Thomas Matthews (well, first time for 16 years) and John Bowgen didn’t get very far at Crail first time out in their VW Golf. The car hit one of those big lorry tyre stage markers which pushed the wheel back and popped the driveshaft out, along with a snapped bottom suspension arm. Call it work in progress.

If desperation is the mother of ingenuity, then she was busy at Crail. On his first ever rally Karl Knox (Keith’s nephew) had a problem with his Nova. It was blowing out oil between the cylinder block and sump, so the support crew set to. But with no gaskets and no sealant they needed a cunning plan. They were using tin snips to cut strips of metal out of John Smith beer cans, folding them, and packing the folded strips into the gaps, then tightening the sump bolts up again. It worked, the youngster finished his first rally.

One of the drives of the day at Crail came from the number 80 seed, Brodie Balfour. This was the first time the 14-17 year old Ecosse Junior graduate had driven a four wheel drive car. Apparently it was a ‘try before you buy’ type of run in Stuart Baillie’s garishly green Subaru Impreza, and Stuart co-drove. Brodie was fair enjoying himself and the power with Stuart gleefully rubbing his hands: “I’m just letting him use a wee bit more each time – to keep him hooked!” The rascal, eh?

If you could bottle the enthusiasm that the 14-17 year old rallying youngsters show then you could sell it to the auld gits for thoosands. For instance, young Jude MacDonald was spotted peering down at the front of his Nissan Micra, and when asked why, explained: “I need air scoops! I’ve never had brake fade before and I’m getting it now at the end of the 7 milers with the two big hairpins and the chicanes.” He’s still not quite had the Micra flat out yet: “I’m on the rev limiter in third on the long straights, and sometimes just get it into fourth before I’m back on the brakes. I’ve never had it in fifth – that’s still uncharted territory.”

Young Lewis Haining was having his third outing in the 14-17 year Ecosse Challenge and had Mark McCulloch in the left hand seat with Mark commenting: “He going well on only his third rally, but he’s braking too early. I keep telling him not to brake till I tell him to brake – trust me! I’m shouting ‘Keep going, keep going’ and then I notice we seem to be slowing. His foot had crept on to the brake pedal, then he hits it hard when I shout ‘brake’. I told him that was sneaky, sneaking on the brakes before I tell him. You know what, I don’t think he trusts me!”

Alice Paterson was happier at Crail with a change of co-driver in her Peugeot 107. She had the very patient and veteran Ian Crosbie alongside instead of the impatient and not quite so veteran Uncle Ian: “What a difference,” she said, “I’m not getting shouted at!”

Alan Kirkaldy was in fine fettle at the Crail weekend. Perhaps the fact that he had finally got around to marrying Jennifer had something to do with it. Congratulations to you both.

It was good to see Michael Glendinning at Crail, first time out for nearly two years. The big chap has been well-crook and in and out of hospital over that period with kidney problems but hopefully he’s now on the mend. As if that wasn’t enough, he was competing with an injured ankle: “I was putting the car on the trailer yesterday to come up here – and it fell off!” His left ankle was strapped up but it was twice the size of his right, but he was just so glad to be back in the Subaru and back on a rally. Fair play, eh? 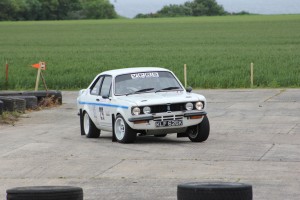 Kenny and Keith – in perfect harmony!

There was a touch of sibling rivalry going on between the Fair brothers. Cameron Fair was co-driving for Ross McFadzean in the Subaru while younger brother Keith Fair was co-driving for Kenny Moore in the Avenger. Kenny set the younger boy up with a pep-talk at the start: “I’m over 50 and my younger brother’s never beat me!” It wasn’t as if the youngster was needing any encouragement anyway, but the two set off at quite a lick, the Avenger quicker over the first two stages than the Subaru, then came the third stage, and the Subaru’s electrics died. Job over. That didn’t stop young Keith though, he was fair egging on his older pilot. Come the second last stage and Kenny entered a long fast left hander with the youngster shouting “It’s flat, it’s flat” but as Kenny recalled later: “It was going well, but it was a long, long bend and it was getting a bit too quick. I just touched the brakes, and that was it. It spun right round and back across the road and into the field. As I drove out, I turned to young Keith and said ‘Right, you call the bends – and I’ll decide the speed!'” They still finished 19th o/a and at the end of it all, Kenny was quite complimentary about the youngster’s attention and enthusiasm. Gaun yersel Keith!