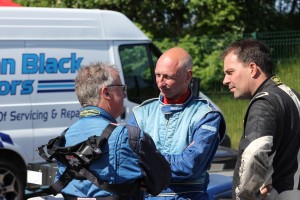 Bruce Edwards and Jim Smith won this year’s Crail Summer Stages Rally, but they were harried all the way by Alan Kirkaldy and Don Whyatt. They finished just 14 seconds adrift of the winners after six stages.

Goodness knows what Bruce has in his breakfast, but if the Government ever finds out, the youngsters will be in trouble. They’ll likely put the pension age up! Whatever, the Darrian Millington crew were up and at’em like a Skye terrier scenting a postie. They were the only crew under 7m 20s for the first stage of the day, that was 3 seconds quicker than John Rintoul in the Hyundai and 4 seconds up on Alan Kirkaldy in the Mk2. Barry Renwick got off to a good start too, fourth quickest in the Proton Millington with Gary Adam and Alistair Inglis rounding off the top six fastest times.

There was however a notable omission from this line-up, the yellow Metro 6R4 of Tommy Morris. Every now and again, shit happens, and co-driver Colin Harkness manfully held up his hand to it. They had done an extra lap! That was their event goosed right there, but there was also a wisp of blue smoke trailing from the Metro exhaust, so it was on to the trailer it went. Billy McClelland struck trouble towards the end of the first test when the diff failed, and the Opel Kadett klunked over the finish line, and Chris Abel was another to post a slow time when the Escort’s oil pressure plunged. Tom Hynd got no further than the first stage with a broken gearbox in his Clio and Richard Sutherland retired with a blown diff in his Opel Manta.

It was all change in the second stage though, Barry Renwick scorched round the 6 mile test, 2 seconds quicker than Edwards with Rintoul and Kirkaldy a further 2 seconds back sharing third fastest. Alistair Inglis was fifth fastest in the Lotus Exige with John Marshall rounding off the top six in his Subaru Impreza. Not so lucky for Bill Hamilton though. The Opel Kadett rumbled to a halt mid stage with a broken timing belt while Russell Mann’s Lancer also rumbled to a halt with a broken gearbox.

Those first two dry stages were conducted under grey skies which at one point threatened rain, but it held off, and then glory be, the sun came out. Scorchio at Crail, eh? Manna from heaven for the two wheel drive brigade.

Edwards hit the front, fastest yet again over Stage 3, but where was Renwick? The car was still sitting on its axle stands stubbornly refusing to fire up while the boys scuttled round it like demented ants trying to find the cause. It was a repeat of the same problem at the previous Ingliston event when the car for no apparent reason decided that two stages was enough. And like a Blackpool donkey facing a squaatter of weans from Glasgow, wasn’t for going anywhere. 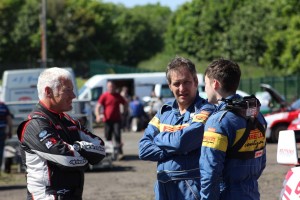 Kirkaldy dropped 10 seconds on this stage alone to Edwards: “I was just too cautious to begin with,” said Alan, “so it was my own fault.” he was still second quickest though from Gary Adam who had middle son, 19 year old Connor, co-driving for the first time. Colin Gemmell was fourth quickest having diagnosed a loose turbo pipe after the first two stages on his Subaru. Alistair Hutchinson was fifth quickest in the Renault Clio ahead of Ian Paterson in the Subaru who had done his chances of a promising finish no good when he clouted a large bale on the first stage. 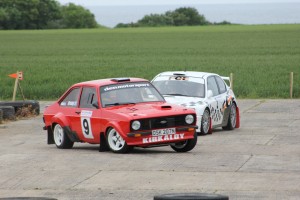 Missing from this line-up was John Rintoul. He had been wrong-sighted catching the car in front as the Hyundai approached the Split – and he went the wrong way. It was just one of those things. Too many things fighting for space inside his ‘thinking box’ and trying to process all that information in a split second. Easy done. Even so, it makes you wonder why more women don’t go rallying – they can multi-task a heckuva lot quicker than us mere blokes. Ross McFadzean’s run ended here when the Subaru’s electrics died and Ross Pringle was forced out with a broken driveshaft in his Opel Corsa.

At the end of the fourth stage, the red Escort was snapping at the wheels of the Darrian. Edwards was still quickest, but by only a single second from Kirkaldy. The best that Gary Adam could do was 13 seconds slower than his Escort rival but he was still well clear of Gemmell, Marshall and Hutchinson. There was no sign of Alistair Inglis this time. The Lotus had been in the queue waiting for the start when it boiled and dumped all its water, but there was more to the problem than an automotive spitting out of the dummy gesture, and the car was wheeled away and on to the trailer.

On the penultimate stage, Kirkaldy clocked the fastest time. He was 10 seconds up on Edwards when he broke the timing beam. Bruce just looked at his toes and grinned. The Darrian had suffered from a slight touch of ‘excessive pilot optimism’ and locked-up under braking into a hairpin, sliding off between the bales and tyre markers. No contact, no damage, lucky boy.

Adam was third quickest ahead of Marshall, who just pipped the closing Gemmell, with Ian Paterson rounding off the top six times.

Going into the final stage, Edwards’ lead had been reduced to 7 seconds and there was an 11 mile test lying in wait. Surely not? If Alan was on the limit, what was Brucie on? He stopped the clocks 7 seconds sooner than his rival and increased his winning margin to 14 seconds. Adam was over half a minute behind in third place at the finish. Gemmell started the last stage 3 seconds in front of Marshall but finished 9 seconds behind him courtesy of an over ambitious braking manoeuvre while Marshall stuck to his solid pace and it paid off with fourth overall.

Alistair Hutchinson rounded off an impressive run with sixth overall in the Clio scoring the top FWD placing on the way while Ian Paterson was seventh and Bob Grant was eighth after spinning and stalling in the third test. Gareth White was top 1600cc car in 9th place overall in the Peugeot 208 by just 11 seconds from the Vauxhall Nova Kit Car of Neil Thompson which was sporting a bit of panel damage after an early argument with a bale. Regular 1600 class front runner Sean Robson was plagued with power steering pump problems in his Citroen C2 and finished 17th.

Stuart Walker just missed out on the top ten in his Skoda and he almost ran out of tank tape! He had given the Fabia a fair old skelp on the nose in the first and fourth tests with tape being needed to mend the tattered remains of his front bumper. Euan MacKay had earlier been leading the 1600 class in his Peugeot but had to settle for third and twelfth overall once White and Thompson got up to speed.

First time out for two years, Michael Glendinning finished 13th, complete with broken ankle (there will be more in the ‘Gossip’ section later) ahead of the fourth placed 1600 car, Greg Inglis’ Citroen C2. Young Greg is now getting to grips with the wee Citroen and showing a fair turn of speed but learned a valuable lesson at the weekend – large bales impair speed and progress when hit!

Nick Rintoul is another fast improver, urging the wee Skoda Fabia R2 round to 15th place ahead of Alan Wallace in the Lancer and Sean Robson.

First time out in a four wheel drive car, Brodie Balfour scored a superb 17th overall. Not bad for someone coming out of the 14-17 year old Junior category in FWD 1 litre machines and having his first run out in a machine that has something under the accelerator pedal when pressed! Kenny Moore was 19th in his Avenger after a pretty lurid spin in the fifth test (more about that in ‘Gossip’ later) and Iain Sanderson rounded off the top 20 in his Mk2

Finlay Retson scored a convincing win in the Crail Summer Stages Junior Rally winning by almost a minute in his Citroen C1. Ewan Tindall was second in another C1 while Harry Chalmers lost a chunk of time in the first stage in his VW Up!. When handbraking the car round a hairpin near the stage finish, he yanked the lever too hard, beyond the ratchet, and it jammed, locking the rear o/s wheel.

Lewis Winder finished fourth in his Nissan Micra despite sticking front brake callipers on the first two stages. These were fixed at service before the problem re-appeared on the final two. Jude MacDonald finished fifth in his Micra but due to the long straights at Crail encountered a never before experienced problem – brake-fade! Johnnie MacKay rounded off the top six in another Micra with Josh Hislop failing to finish when a driveshaft broke on his Peugeot 107 on the very first stage!