It would appear that my opinionated views on the recent Jim Clark Reivers Rally cancellation struck a chord with some old hands out there, and it also prompted a few questions from the youngsters. Primarily, what was the original Forestry Commission per car/per mile charge. How did it work, and how did it compare with the current flat rate?

Before I get into that, perhaps a short history lesson might be in order – are you sitting up at the back? 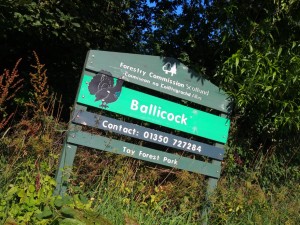 Once upon a time, rallying in the UK was almost entirely staged on public roads and private land. There were no ‘Special Stages’ as such, it was down to navigation – plot and bash as opposed to satellite! – with a series of tests all along the route, be they driving tests, autotests, speed hillclimbs and sprints and regularity sections whereby crews had to average a set speed over a set distance.

Cars were basic and the driving was spirited on relatively traffic-free roads, but as cars became more sophisticated and powerful, roads improved and traffic numbers increased, so the sport had to change and adapt.

Prior to 1960, private land use consisted of countrified estates and industrial sites, local council facilities and MOD property, but in 1960, the RAC Rally’s Jack Kemsley negotiated the use of a modest 1.8 mile stretch of forestry road over Monument Hill in Argyll to link up the old Military road with the main road at Dalmally and which was run as a ‘timed speed test’.

Apparently this loose surfaced stretch of road was well received. And guess what? He was back for more the following year when the 2000 mile 1961 RAC Rally route incorporated 200 miles of forestry roads for the first time. 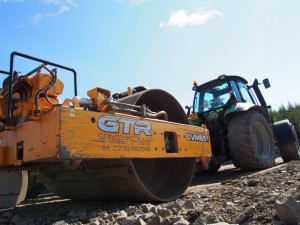 The sport as we knew it was changing. Initially there was no charge but the FC itself was changing and given that faster and more powerful cars were causing damage which had to be repaired, the idea of charging for their use was introduced.

I’m not sure exactly when this charge was formalised as it was very much ad hoc in the early days but in 1974 a charge of 15p per car per mile appears to have been universally applied. It jumped considerably the following year to 26p per car per mile followed by another massive increase to 40p in 1976. By 1980 it was 60p, but when it got to 95p (plus VAT) there were rumblings in the ranks.

With interest in the sport at an all-time high, one day rallies attracting maximum entries of 120 cars (plus a reserve list) and some BTRDA rounds getting up to 200 entries, the FC appeared to be raking in the cash at the expense of competitors. I well remember the leaders of the two Car Club Associations in Scotland at the time, East and West getting pretty heated about what had to be done.

Some of those with quick minds and quicker calculators came up with the notion of a flat-rate charge on the basis, that once 60 cars have passed over a stage, there is minimal road surface damage caused thereafter. The MSA was involved too and had to negotiate the ‘new deal’. In 1987 a flat-rate charge of £149.50 per mile of forest road was introduced. Just for comparison sake, this year’s charge was £688.00 for Primary usage and £408.00 for Secondary usage.

But back to the real issue. Perhaps it is time for the sport and the clubs and competitors to re-consider a ‘per car/per mile’ cost. What may have been the right idea at the time (and it was certainly controversial) is working against the sport now. Those events which attract full entries are making profit while those that don’t are barely breaking even or making a loss. In the latter case that ultimately leads to the ruin of clubs and the loss of events.

Yes, we have lost 3 major forest rallies in Scotland this past two years but in recent times we have lost much more. The central highlands are a rallying wasteland. There are no more forest rallies in Argyll, Perthshire, Stirlingshire or the Kingdom of Fife. We have lost the Burmah and the Argyll Stages, the Trossachs and the Valentine, the Arbroath and the Hackle, the Autumn Stages and the (original) Kingdom, plus the Checkpoint in the North East and the Festival in the Lothian. They all fell victim to rising costs, fewer entries and lack of interest.

To stem the flow we have to save what we’ve got, secure it, and try and build on it for the future. If we don’t then we are currently seeing the last of forest rallying in Scotland, and perhaps even further south. This is a UK national problem, not just Scottish.

It must therefore be worth considering whether a return to the old format of forestry pricing would be beneficial – and more affordable, and ultimately, saving the sport?

For instance, and ignoring second usage rules for the moment to keep things simpler, under the current rules. If a 45 stage mile rally is run today, the forestry bill amounts to £30,960, regardless of the number of entries. The difference here is that if the event attracts 100 cars, the cost per car will be £309.60, but if only 75 entries are attracted the cost per car will be £412.80, that’s over 100 quid more! These costs are covered by Entry Fees and since most event entry fees are competitively similar, it is inevitable that some clubs/events are going to lose out.

If we had a cost per car per mile then this anomaly would be evened out. It would be the same price whether an event ran 120 cars or 60. 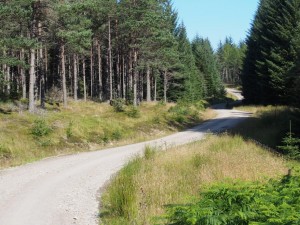 Already I have heard from some folk that the Forestry Commission would not accept this (and we haven’t even asked yet) as it would mean a reduction in income. But surely that is happening already? With three cancelled events in the past 2 years, the FC has already lost over £90,000 in income and any potential future income from those same events.

It would therefore be in their interest to encourage events which fall short of numbers to run and allow clubs the time to get the sport back on to a much more popular footing. Smaller entries also mean less damage to roads, so it will be cheaper to repair them. That means added benefit to the FC in this approach too.

By all means keep to the current allocation of 65 forest allocations (throughout the country) per year but introduce a minimum entry figure of, say, 70 cars to dissuade some entrepreneurial types from running a multitude of mini rallies for a few friends and acquaintances. That will allow those established events that attract fewer than 90 entries to be viable. This will give the sport some breathing space to get itself back in some sort of order. Because for sure, the sport is under threat like it has never been before, not just in numbers of entries but in the huge increase in workload the rally organising teams face with reducing numbers of volunteers.

If that is not appealing, then how about a levy per car being paid to a Championship who will then disburse funds to those events which fail to reach a break-even figure? Controversial I know but might that be worth considering too. No doubt there will be an outcry from those who run big events having to subsidise those who don’t quite meet the numbers, but I would argue there is a wider issue here. It’s all about the survival of the sport. Whether you think all this is bollocks or not is beside the point, all I hope to do is provoke discussion and debate. If anything comes out of it then well and good, if not, I’ll see you on the golf course.

Put it this way, if Rally Wales GB is feeling the pinch, then we’re all in deep sshhtook.

In just over two weeks time, the Scottish Association of Car Clubs will be having their next quarterly meeting. Hopefully some of these ideas might get an airing there.

Note: I believe the figures and dates above to be fairly accurate, if anyone can fill in the gaps or add to the argument, by all means get in touch. I do have more information but I have tried to be brief!! Honest, I did try.