You are here: Home » Rally News » 17 May: Speyside Blethers 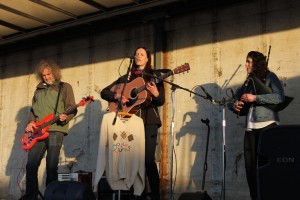 Billy Miller had gone the extra mile to entertain the punters at the Speyside. His yard and workshop in Elgin were used for Scrutineering and he had laid on entertainment. He had opened up one of his curtainsider 40 foot trailers and invited local band ‘Dougal’s Jumper’ to play on this makeshift stage. They were foot tappingly good with their blend of traditional, country, folk, rock, hilbilly musicality – I’m not sure I really knew what it was, but I fair enjoyed it.

Rally winner, Garry Pearson, couldn’t hang around the Elgin finish too long as he had to head south quickly. He was acting as groom to his girlfriend Sarah’s horse Winston XX at a local event in the Borders the next day, and that meant an early start. From spraying champagne to cleaning up dung, what a weekend for Garry.

It’s called ‘friendly rivalry’ but Alasdair S Graham isn’t quite so sure about rival Fraser Wilson‘s advice. Apparently he advised Alasdair that the only way to get round the hairpin in Cooper Park was to handbrake it. Naturally, due to Fraser’s huge experience, Alasdair took this advice on board and after an embarrassing spin in front of the huge crowd, wished he hadn’t. They are still pals – allegedly.

When it comes to gentle encouragement and kind words to younger siblings, Quintin is a past master, but he needn’t have worried. Freddie Milne scored an encouraging 9th overall first time out in the ex-Barry Groundwater Mitsubishi Lancer Evo9 and first time out since he destroyed his own car on the RSAC Scottish Rally last year. Even so, Q’s younger brother had an added incentive to do well with ‘big brother’ out in his Mk2: “If I beat you in this today, you’ll never live it down when you go home.” He didn’t.

Euan Thorburn faced a hectic race to get ready for the Speyside. Following transmission failure on the Circuit, the gearbox had been sent back to Peugeot for a rebuild. However, they managed to borrow a gearbox from Jonny Greer in Belfast so Dad Alistair Thorburn was dispatched at mid day on Thursday from Duns to Stranaer, then by ferry to Belfast where the ‘box was collected and returned to Duns in the early hours of Friday morning. It was only when they installed the ‘box they realised it was minus the joint between engine and ‘box as Euan had sent his ‘box away complete with the union. After another phone call, Jonny sent the part to Belfast for ferry to Stranraer leaving the Thorburns with another problem. They were already on their way to Elgin. After a Facebook appeal, rally fan Ryan Johnstone picked up the part at the ferry port which duly arrived in Elgin in the early hours of Saturday morning. The bleary-eyed team made the rally start with time to spare.

The indomitable Ken Wood was spotted doing a bit of woodwork on John Wink‘s car complete with hammer and chisel, and sometimes a screwdriver. When John understeered into a log pile, a big branch got itself jammed between the tyre and a front rim, but somehow stayed inflated. Back at service, Ken set to with his carpentry skills chipping the wood out. Normal folks would have deflated the tyre, extracted the wood, and re-inflated the tyre, but as Ken explained: “We’ve got nae air. So we cannae let the air oot, cos we cannae blaw air back in.” Sorry I asked.

In his ongoing bid to educate the Editor of this humble collection of insightful and honest reportings, Bruce McCombie had another Doric word for him to learn. Before the rally he exclaimed: “It’s airish this morning.” That just means it’s cold.

If ever anyone deserved to get a full rally under his belt, it’s Sandy Arbuthnott and he managed it at Speyside, albeit 54th overall, finishing to huge applaud (one fan) and celebration. He broke the camshaft on his Mk2 at the Snowman but Ricky Gauld fixed him up and he was back out for his local event. To get some miles on the engine he appeared at the Guest Day to help the organisers. “I did four runs and completely goosed a set of DMACKs,” said Sandy, “either they’re shit or I’m rubbish.” The question was asked, but did you enjoy yourself Sandy? “Oh aye.” So now we know. He was probably yee-haaing too much. Gaun yersel Sandy.

Looking rather glum at Huntly service was Calum MacKenzie despite having the wife and family in tow. The reason for his emotional state? He had sold his beloved Mk2 to Quintin Milne. Heather managed to have a word before I said anything and put my foot in it: “Don’t speak to him, you know what he’s like.” Aye, indeed.

Fraser Loudon was very patient with me when explaining the technicalities of what he does for a living. Speyside was his first run out since this event last year as he had been working in Houston (not the Ayshire one!). Apparently he does the opposite of NASA – they go up the way (rocket fuel) whereas he goes down the way (oil), so now you know too.

Alan Kirkaldy was having his first run out in a 4WD machine having acquire the ex-Donnie MacDonald Mitsubishi which Reay MacKay drove on the Snowman and finished 42nd overall.

Rally fact. The Sloan boys are not twins. Scott and David Sloan who were running at number 56 in their Vauxhall Corsa tried to convince me that they weren’t twins and I was just needing my eyes tested as I was seeing double. Their proof? “David is 9 minutes older than me,” said Scott. So there.

The rising cost of rallying was evident in Caroline Carslaw‘s attire at Speyside with big holes in her jeans and her knees poking through. It shows how much I know, she assured me quite huffily that this was the height of fashion.

After the culinary mishap on the Border Counties, Louise Aitken-Walker had brought chocolate cake and shortbread to the Speyside for Gina’s service crew. Not only was she one helluva horsewoman and rally driver, Louise is also something of a star baker. Anyway, when asked if her choc cake was good, a passing Scrutineer (Neil Ritchie) was heard muttering: “It’s the only reason the car passed.” But yes, he was only kidding, the car was fine and the cake was scrumptious.

By this time you’ll all know that Jock Armstrong had a training accident on his mountain bike, falling off and damaging his shoulder, but what you won’t know is that the week before he had been leading a local 5km hill race as he headed towards the finish line in Castle Douglas. If ever anyone proved the value of a good navigator, it was Jock: “Well, you’d think that having set off at the start of the race, you would just naturally run back there to finish.” Apparently not, the finish line was in another next street nearby. By the time he realised his mistake and turned round, he finished fifth. Paula confirmed she wouldn’t be taking up running, it’s bad enough sitting in a car with him.

Sneaky git … Two weeks before the Speyside, Mike Faulkner disappeared off the face of the earth with friends and family wondering where the hell he had go to. All was revealed three days later when he returned home with Julie Latham having run off to Liverpool to get married and then honeymooned in Amsterdam. It was only on their return that they told everyone. Congratulations to Mike and Julie, and no, there is no truth in the rumour that Mike was only trying to ensure that he retained a ‘cheap’ member of his service crew to cook and clean up after him. Have a good life you two.