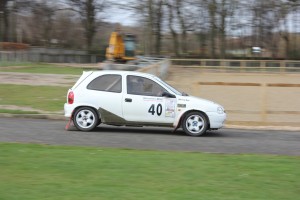 Steven Hay and Steven Brown were a class apart in the 1400 class finishing almost 7 minutes clear of the opposition in their Vauxhall Corsa. They nearly chucked it all away on the penultimate stage when they got the car a bit out of shape over a jump and landed with one wheel on the grass. Neil Raven was second in his Peugeot 106 and Grant Carbry, having borrowed brother Ross’ Corsa took third but only after replacing two broken driveshafts during a busy day. Susan Shanks on her first event as a driver for 12 years, scored fourth in class: “I was knackered after two stages,” she said, “the car has no power steering and this is a bit different from navigational road rallying!” Marcus Tinsley failed to finish in his Peugeot 205 Rallye when the diff failed, a similar problem which befell the similar car of Martyn Douglas. Craig MacIvor failed to start when the diff broke on his Nissan Micra just after passing through Scrutineering! Gutted doesn’t cut it.

Class 2
Sean Robson, Neil Thompson and Gareth White were the stars of the 1600 class (see Main Rally report) with Nick Rintoul not too far off the pace in his Skoda Fabia R2, Greg Inglis was fifth as he gets to grips with his new Citroen C2 R2 but dropped almost a minute on the final stage with a hairy moment in the wet. Steven Ross was sixth in his Corsa and was lucky to finish: “It’s jumping out of gear,” he said, “first went and now second gear is going and I’m having to hold it in. The engine mount is loose as the threads are stripped in the engine block, so it’s fingers crossed.” Tom Howie was 7th in the Talbot Sunbeam despite hitting a bale and Martin Murray was 8th in his Escort. Beefy Fraser scored 9th in his Avenger despite two punctures, with Donald Cameron’s Honda Civic rounding off the top ten commenting: “My first event was Mull last year, so I’ve only rallied in the dark till now.” Young Stephen McClory didn’t fare too well incurring a maximum on the second stage when the gear linkage popped out of the Fiesta and he fixed it in stage while Gary Laverick incurred a 30 second penalty after striking a gate post with his Puma. Bob Irvine finished just outside the top ten in his Astra after hitting a bale and cracking the windscreen. Stevie Irwin retired his Nova: “The gearbox broke,” he said, “at first I thought I had a puncture – then I heard the noise!” Gavin Lloyd retired his Nova after striking a bale with the front n/side corner and Pete Fleming’s Escort broke its alternator. Joe Pringle retired his Corsa on the penultimate test when it slid on to the grass and clouted a tree, damaging a wheel in the process. Alan Stark broke the rotor arm in his Peugeot 205 on the first stage and Graeme McKinnell retired his Escort when the front o/s brake calliper seized on the first stage.

Class 3
Hamish Kinloch, Kenny Moore and Bill Hamilton were the top three here with George Auld scoring fourth in his Mk2 from Tom Hynd in the Clio on his first ever visit to Ingliston as a driver: “I’ve marshalled here before but never driven or co-driven.” He added after just two stages: “I’m knackered already – even with power steering.” Richard Sutherland eventually finished sixth in the Manta but was late through scrutineering in the morning because the beast refused to fire up and they had trouble getting it off the trailer. Gordon Halley was 7th in his Mk2 from Robert Marshall in another Mk2. Young Taylor Gibb lost out badly on the first stage incurring a Maximum when the throttle sensor plug self-ejected putting the Fiesta into ‘limp’ mode to finish the stage. Kevin Mathers rounded off the top ten in his Peugeot and Tom Middlemiss lost out when he had to repair a wheel bearing on his Vauxhall Nova. Keith Meins was forced out after brake failure but only after he had wedged the Proton across the ornamental bridge and Chris McCallum was an early retirement when the Mk2’s diff broke.

Class 4
Adam, Inglis and Edwards filled the top three places here with Alex Adams fourth in his Pinto engined Mk2. Tom Blackwood was fifth in his Mk2 from Fergus Gray in the BMW 130i. The BMW Compact of Ian Shiells was the final class finisher in 7th place.

Class 5
John Marshall and Ian Paterson took the top two places from Alan Wallace in his Evo6 with Derek Connell finishing 8th in his Impreza just ahead of the final class finisher, the Audi TT of Gordon Milne. Stuart Walker retired his Skoda approaching the start line of SS5: “I heard a noise, tappets or something like that. I still had oil pressure so switched it off and pulled out. I didn’t want to risk it,” he said. Russell Mann failed to finish when his Impreza’s prop shaft broke at the start of SS3 and Gordon Morrison was forced out in rather more dramatic fashion. When the power steering pipe fracture don his Subaru, it sprayed hot oil on to the turbo which then ignited just ahead of the start of SS5. Fortunately the boys were out of the car quick and others appeared with fire extinguishers to help out. Hopefully, there’s no serious damage as it was caught quite sharply, more smoke than flames.