The barter system is alive and well in rallying. Apparently, Barrie Lochhead did a deal with Jordan Black in the run up to the Border Counties Rally. Jordan was needing a hand with some jobs on his Citroen C2 and Barrie had a problem with his central heating. Since Jordan is a qualified plumber and Barrie is one of the best prep experts in the business a deal was done whereby Barrie sorted the car and Jordan tackled the heating system. The outcome of the arrangement meant that Jordan was able to contest the Border Counties – until he tipped it off, and Barrie was supposed t be as snug as a bug in a rug. Or, to put it another way, is glad that Spring is here and the temperature is rising, cos his heating is still not working. Well, you know what plumbers are like.

More bartering was evident between Steven Smith and Grant Inglis. Both had brake trouble in their Mk2s and needed to fit new lengths of brake pipes, but neither had the right stuff so Steven swapped some aeroquip in return for Grant giving him some copper piping.

The Struthers team were spotted leaving service early shortly after they had set up camp. Word had come through that young Andrew had put the car off in the first stage. When asked what was up, his Mother replied: “He’s rolled the car, but he’s OK – till I get hold of him.” She also said something else which I can’t repeat – cos I’m feart she might get hold of me.

Des Campbell was spectating with his two boys at the Border Counties and admitted that he is up to something in his garage. In a bid for cheap(er) power, his Peugeot 206 is undergoing a transplant. He has bought a Citroen C2R2 engine for it: “It’s basically the same engine as the Peugeot power unit but with different ancillaries,” said Des, “but it has 197hp straight out of the box. A new wiring loom and ECU and it will be ready to go.”

Robert Harkness was another interested spectator at the Border Counties taking time out of his new car build. The old car was badly bumped in Grizedale last year but he had a spare E30 ‘shell which is being readied for the installation of his new all-steel, M3, 300hp straight six which offers a wee bit more power than his previous old alloy engine which had 240hp. He’s taking his time with the build so it will be a few months before its first airing.

John Rintoul was perturbed to note that his HANS device failed at the Border Counties. It wasn’t a major component failure, but the pin which locks the retaining strap to the helmet had lost its wee spring so wouldn’t shut and lock it in place. The spring is no bigger than one f those wee things you get in a Biro so it’s easily lost. Luckily, John had another helmet with him, but word to the wise, perhaps everyone should have a wee check of their devices before the next rally.

As most folks know there is a tremendous rivalry between Steve Bannister and Matthew Robinson and that was evident again at the weekend. When Matthew started rallying just a few years back, Steve was a hero (and still is) and nothing felt better to Matthew than getting on Steve’s pace, and sometimes even beating him. Matthew has now swapped his Mk2 for a Fiat 131S which is not quite on the Mk2 pace as yet but is getting closer all the time. He struck trouble on SS2: “I thought the diff had gone, so I pulled over to have a look. I found a stone jammed between a rear brake calliper and the wheel rim which jammed the wheel solid, and it wouldn’t go forward. We tried everything to dislodge it and nowt worked. Then as we pushed the cars backwards as opposed to forwards, the stone just fell out. Still I’m not bothered, I’m still learning the car.” It was then that he came out with the quote of the rally: “I got a few seconds back on Banner in the next stage – but it’s really bad when an old git with a bus pass can take time out of you!”

Linzi Henderson was going well in the family Subaru but was complaining about her ‘new’ co-driver who had a few observations to make of his own. Tom Hynd commenting that “She won’t listen,” with Linzi saying, “He keeps hitting me with his clipboard.” Walter’s (her Dad) eyes just rolled skyward at the spat. Who’d be a parent, eh?

Fergus Barlow was spotted prowling the Service area at Newtown St Boswells and when challenged, claimed to be working as team management for the Mull squad. That’s like putting a six year old with a box of matches in charge of the firework store. 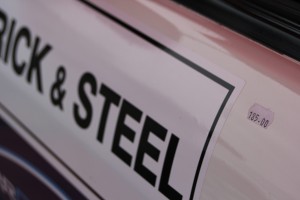 Michael Binnie did well on his first forest rally. The ex-karter and son of former Scottish Formula Ford racing star Cameron Binnie always had a hankering for the forests as opposed to the circuits. His uncle then kindly offered Michael the loan of his Evo5 and he finished 30th overall on his first ever visit to the forests. Mind you there was added pressure from said Uncle, one Garry Wilson Esq, who had ‘encouraged’ the lad to look after the car and hand it back in one piece. To emphasise the message, Garry had gone to the trouble of making up wee price stickers and he stuck one on every every panel on the car including the roof skin. Garry said later: “It was only a joke, it was a bit of fun.” Or was it? I’m not so sure.

There were a couple of weel kent auld codgers servicing on Gina Walker’s car (as they used to look after Louise in the good old days) and perhaps they should remain nameless as the banter was priceless. One of them spotted a box of biscuits in the back of the pickup and helped himself, as you do, to stay fuelled up and incentivised while crawling over and under rally cars. Anyway his pal turned to me and said: “Since he started eating these biscuits, he’s been chasing cars and pissing against trees – they’re dog biscuits.” No, I didn’t have the heart to tell him either.