Running the most northerly stage rally in the UK presents organisers with challenges that few other events will ever experience. This year was no exception. On the Sunday before the Snowman rally, it snowed, and was all gone on Monday. It snowed again on Wednesday and disappeared on Thursday and at no time was the temperature much below freezing. Snow was again forecast for rally weekend, but how much and for how long? No wonder there were quite a few expressions of annoyance from some teams when the rally was declared a ‘Winter Rally’ at 4pm on Friday leaving teams without snow tyres and the tyre trucks with no stocks. That decision was not taken lightly by Clerk of the Course Neil Moir in consultation with Safety Delegate Nicky Moffitt, but that’s the pressure these folks are under since the Scottish Government and the Health & safety Executive decided that we need some ‘help and advice’ to run our sport – not to mention the shame, blame and claim culture pursued so vigorously by some of the less scrupulous elements of the great British legal profession.

The organisers’ trials and tribulations were further compounded by spectators falling ill. The first stage was delayed by an hour and ten minutes when a spectator with a suspected heart attack (fortunately now fully recovered) had to be rescued and then a further hour long delay was incurred in the afternoon when another spectator with a broken ankle had to be rescued. Another incident when a rally car suffered an underbonnet fire further fragmented the running order. The end result was three separate groups of rally cars on route and a time schedule which was eventually swallowed up by the wintry darkness.

There was a little controversy at the rally finish when Quintin Milne‘s final stage time was ‘adjusted’. Running his ‘magic’ snow tyres on the final stage, he caught the Zero car with three miles to go and with nowhere for the gravel tyre shod Course Car to pull off in the snow, Milne had to sit there as the seconds ticked by. A notional time was agreed which placed Milne third overall at the finish easing McCulloch off the podium by 7 seconds.

Bumped into Bob Wilson at Jurys Inn the night before the rally while I was talking to Quintin Milne and Bob reminded me that it was 25 years ago that Q’s father Donald Milne won the Snowman in his Metro with Bob on the maps.

Speaking of Q, he was just back from a business trip to South Africa doing “oilfield business development work” and still suffering jet lag after his 20 hour trip. Somehow he had managed to buy a rally car on his way back which he picked up on Thursday morning to do the Snowman.

John MacCrone brought a touch of international colour to the Snowman having teamed up with Australian co-driver Rhianon Gelsomino in the Watermans Fiesta R5. Rhianon has contested the Snow Rally in the USA three times so conditions in Inverness held no fears for her. As for J Mac, he last competed on the Snowman in his Peugeot 205 six years ago. “It wasn’t such a big deal ripping the bumpers off that,” said John, “but today is all about learning the new car.”

Barry Renwick has added a forest-spec Proton Millington to his collection (he already has a tarmac Proton) and plans a full campaign on the SRC this year. Considering he’s been around rallying for yonks it came as something of a surprise when he said: “This is only my second gravel rally. I did the Malcolm Wilson once many years ago.” He slid off the road on the third stage and although there was no damage it had to be towed (rather than pushed!) out but he was still beaming at the finish: “That was fun – while it lasted.”

The lights had been burning brightly throughout the nights in Dumfries in the five weeks prior to the Snowman where Peter Stewart and his army were expending herculean efforts to get his VW Polo S2000 ready to run. Unlike his Dad, Richard, who had also bought a Polo S2000 (but wisely ready prepped!), Peter’s was a box of bits, and with no Haynes manual to hand they had to resort to taking Dad’s car to bits to see how certain parts fitted and then rebuild Richard’s car as well. So it wasn’t just one car they rebuilt – they rebuilt two. Sadly, all that effort came to nought. Peter’s car suffered an underbonnet fire during the rally, and although the boys are OK, it’s a bit of a mess underneath.

The appearance of Chris Collie at Inverness was a bit of a surprise, not least to him. There wasn’t a Mitsubishi in sight. Instead he was at the wheel of a Peugeot 205. “My mate John MacPherson bought the car last year but hadn’t used it,” said Chris, “and he said it would be nice to see it out on the stages. So it was either a weekend out in the woods or a weekend at home with the kids. We put some air in the tyres, got it MOT’d, and here we are. It was great fun and the class was very competitive.” Not only did he win the class he equalled Steven Ronaldson’s seventh fastest stage time in SS4 and finished 34th overall.

Donald Peacock lost out on the Class 3 win: “I spun twice in the first stage and got caught by Chris Collie – he was going well today, eh? We had a bit of luck in the next stage though. Somehow we bent a wheel rim but the tyre didn’t go down.”

John Wink was going well on the Snowman, hard to think he only took up the sport a couple of seasons ago. Over the Winter his Evo9 had undergone a rebuild and upgrade with new front suspension, brakes and an engine re-map for fuel. “I used the anti-lag on SS2 and part of SS5 and it felt comfortable,” he said. He finished just outside the top ten in 12th place.

As mentioned in the Class roundup section, Ian Cattanach won the 8v 1650 class in his Talbot Sunbeam navigated by fiance, Lisa Watson, but apparently there had been some serious debate prior to the rally about the purchase of suitable rubber for a snow rally. According to his service crew, Ian is a stranger to his own wallet and there was talk of raiding his wedding budget to buy snow tyres. With the wedding not due until May, apparently it all came down to a straight choice – tyres or a four piece string quartet. I avoided this pre-marital mayhem, but Lisa did tell me later, they’re still having the string quartet! Go Lisa.

After setting a good time on the first stage of the Snowman, Steven Smith had an intermittent alternator fault in his Fiesta R2 engined Mk2 and the team struggled to reach the offending bolts under the engine and right at the back. They got it going but on the start line of the fourth the throttle linkage jammed wide open: “We made it through to about half a mile from the end when we slid wide and had a high speed spin into the snow covered moss. Car was stuck, so game over.”

Linzi Henderson was out in the family Subaru and finished 19th in class despite hitting the chicane bales in SS2. And the reason for hitting the bales? Snow or Ice? Nope: “I’m a farmer’s daughter – I like bales!”

Robbie Daly retired his Peugeot 106 in the fourth test but his problems started well before then. On the road run out of Inverness to the first stage, the brakes seized on and despite liberal applications of WD40 and the ‘gentle’ persuasion of a big hammer, the wee Peug was having none of it. So he got on the phone to Dingbro who dispatched one of their wee red vans with new discs and pads to a lay-by on the A9. Fortunately because of the delay in the first stage the team managed to get the wee car running and on its way. Sadly his first forest event ended in the fourth test. 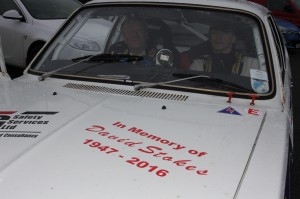 Ivor Clark was fulfilling a promise at the Snowman. Ivor was 69 on the 10th of February, the day that David Stokes passed away from cancer, and had been speaking to David just two days before and told him that he would drive the Snowman in memory of his pal. This was the first time that Ivor’s Avenger had seen the woods since he installed a 2 litre Honda engine in the car. He finished fifth in class. Nice one Ivor.

Wayne Sissons had been up to his usual tricks with a certain ‘customer car’ prior to the Snowman. He had fitted an audible reversing alarm to Brian Watson’s Mitsubishi. In the rush to get the car ready he ‘forgot’ to tell Brian about this safety addition to the spec. As expected Brian’s vocabulary took on a distinctly celtic and colourful hue when he heard it whilst reversing out of scrutineering. It wasn’t just an audible alarm, it was verbal, extolling the message to all around “Danger, this wreck is reversing!”