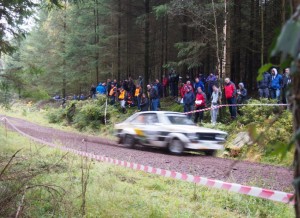 It’s a bit late, but here goes anyway. My thoughts on a meeting hosted by the Scottish Rally Championship (SRC) in Perth on Saturday 3rd October, or at least the SRC Competitor’s Representative arranged and hosted the meeting which was primarily aimed at rally competitors.

This was to try and find out what competitors wanted from the SRC in 2016. Given the subject of the meeting a pretty poor turn-out resulted. I had fully intended to write up my observations before now but it’s been a busy month. Better late than never, or not?

No more than 45 folk turned up of which no more than 25 were drivers and co-drivers of which about 15 were regular SRC registered competitors. Around 15 email messages were received from folk who couldn’t manage.

Neither was the full SRC committee in attendance or representatives from all multi-venue Scottish forests events.

So on that basis the topics discussed and opinions expressed represent only those who were there.

There are still many people who think the threats to the sport are being exaggerated. I don’t believe this is the case. But the question was asked – Is the sport in crisis? I believe it is. Anyone who doesn’t is simply refusing to accept it or ignoring the blatantly bleedin’ obvious!

Car clubs are disappearing, car club membership numbers are falling and not enough newcomers are being attracted into the sport. It’s not just competitors. Not enough youngsters, or even middle agers, are willing to take over from the mostly old-fart brigade who are currently running events in Scotland.

I sit on two committees and go to the quarterly association meetings where the room lights need to be dimmed because of the glare from white hair and the highlights from bald heads.

It’s taking more planning, more physical effort and requires more hours to organise a multi-venue forest rally these days. So, if there are fewer newcomer volunteers then who will replace the old farts who think they’ve done their bit and want to take up gardening or golf?

Rising costs are putting off would-be competitors before they start. And if they do invest in all the safety gear and a vehicle, there are the costs of entering and contesting events which are rising as the costs of staging events increases.

What was once an amateur sport organised by volunteers for fun is fast becoming an organisational and logistical headache governed by ever more rules and regulations and it’s knocking the heart out of enthusiasts. What used to be a bit of fun in the woods the day before a rally staking, arrowing and taping with merry banter going back and forth now has to be pre-planned, teams briefed, supplies parcelled up and tasks set, then de-briefs at the end of it before taking the Safety Delegate round the full route to show him what’s been done.

So if the sport can’t attract and enthuse new volunteers to organise and run events, then there will be no events for competitors to enter. Simple as that. Think of the time and effort expended by the Merrick Rally folk over recent years with little reward at the end of it. Do you honestly think they’ll be back?

A similar dilemma faces the McRae Rally. Who or what is going to encourage them to go to all that effort again next year with the uncertainty that they might not get enough entries to justify it? And what of the Galloway Hills? If it hadn’t been for the Irish visitors, it may not have run this year.

The final rounds of the national series always struggle to attract entries as wrecked cars, shattered ambitions and punctured dreams during earlier rounds cause crews to pause, take stock and consider whether carrying on or regroup for the following season. Understandable, but it places those events in a quandary.

No-one can guarantee entries but there does seem to be something of a ‘north-south’ divide. Events in the north seem to attract sufficient entries to make their events viable while those in the south struggle. A list of entries on the six rounds run this year tends to support this:
Snowman (Inverness) – 107 entries
Border Counties (Jedburgh) – 87
Granite City (Aberdeen) – 103
JC Reivers (Kelso) – 78 (including 6 Land Rovers)
RSAC Scottish (Dumfries) – 74 (including 6 Land Rovers)
Speyside (Elgin) – 96 entries

And why can the Championship only attract 163 registered competitors? If there are 600 Rally Competition Licence holders in Scotland and 400 rally cars then why aren’t more folk participating? I spoke to one driver at the weekend’s Galloway Hills, who is capable of running at the front of a Championship field, and asked why he doesn’t do more events. He does the Solway Coast and the Hills each year and had no ambition to do any more. He just shrugged and said: “It all comes down to cost and time.”

A vote was taken at the meeting on how many rounds should comprise the Scottish Rally Championship. Admittedly it can’t be truly representative bearing in mind the poor turn-out but those who were there voted unanimously for 6 gravel rallies and all to count towards the final points. Food for thought?

Some folk even suggested that the six events could be slightly longer, but that would make them more expensive and would require more work by the organisers. Every action has a reaction, eh?

At the present time, the SRC has no plans to change its format for 2016 and is planning on 8 events. Given what happened this year, that is pretty ambitious. How many events do you think will run next year?

And here’s another ‘thought for the day’. What about the BRC? If it gets its act together and three of its rounds are in Scotland next year (plus Carlisle, or even Yorkshire, which ain’t far away) then will that be more attractive to Scottish based crews? Especially those in the ‘south’? That might just threaten numbers of competitors in the northern events!

The SRC management committee and constituent clubs meet on the 7th of November. If you want to have a say, then tell your club committee. If you want to attend. Tough. You’ve missed your chance.

For instance some competitors asked why we don’t use different forests each year. But we can only use what the FC will offer. As for rotating events and using different locations that is not easy either. Some towns and local authorities will only allow their localities to be used at certain times because they have other events, from gala days to marathons to charity cycle rides or even public holidays, cluttering up their seasonal calendars. So it is difficult to move an event once a date has been created.

As I said, crisis? What crisis? If competitors can’t be bothered turning up to such a meeting then why should volunteers bother going to all that effort to run events for no or little reward?

If you weren’t there and now you feel guilty that you didn’t make the effort, well so you should. Susan could have better spent her Saturday afternoon marking her school weans homework (she’s a schoolteacher) than chairing a meeting for the ‘can’t be arsed’ in Perth! Angry? Me? You bet your sweet little paint job I’m angry.