In the weeks running up to this year’s Beatson’s Building Supplies Mull Rally many pundits were predicting the closest competition for many years. Some of the more successful drivers were in new and unfamiliar cars while others had returned with tried and trusted machinery to take them on.

This would only be Calum Duffy’s third outing in his new Subaru, John MacCrone’s first ever drive in a Subaru and Paul Mackinnon’s introduction to RWD. Previous winners all of them, but all in unfamiliar machinery. As for James MacGillivray, he would be using the same Subaru as last year, when he was running as high as fourth, but he was lacking current match practice. On the other hand, Tristan Pye was returning with the Subaru that powered him to the runner-up position last year and John Cope had finally got to the bottom of his own Subaru’s transmission problems and was relishing the prospect.

But as we all know only too well, rallying is anything but predictable. What started out as one of the most mouth watering prospects in the event’s 46 year history ended in tragedy. Early on the second Leg of the two day event a serious accident claimed the life of a co-driver and injured a driver. When the severity of the incident was established, the rally was abandoned.

The news sent a shockwave round the island. It was hard to take in. Just the day before competitors and fans had been basking under blue skies as Scrutineering got underway in Tobermory on Friday morning. Then as the rally start time approached on Friday evening, the blue turned to grey, and the air became damp.

As the top seeds headed towards the top of Tobermory to start the Mishnish Lochs test under dark, wet skies, they were already a man down. MacGillivray didn’t even make Scrutineering, never mind the rally start. A piston failed when he started the car up on Friday morning, a fault too serious to be fixed in time for the rally.

Perhaps it wasn’t really a surprise after all and maybe we had just been kidding ourselves, but fastest man over the Lochs was Calum Duffy. ‘The Comet’ was living up to his name.

Main rival, John MacCrone was already off the pace: “We hit a bump over a crest,” said MacCrone, “and the lights went out. We finished the stage on dipped headlamps, but it was just a fuse.” It happened again on the next stage leaving the Subaru driver over a minute down on the leader.

But the star of the show on Friday evening was Daniel Harper. The front wheel drive BMW MINI was mixing it valiantly with the 4WD brigade. He dropped only 6 seconds to Duffy on the first one and 18 seconds on the 13 mile Hill Road/Loch Tuath test: “We’ve done a lot of work to the car,” said Daniel, “we were holding fourth place on the Isle of Man when a driveshaft broke so I knew we were good to go here.”

Equally, Jonathan Mounsey was on the pace, the Mitsubishi driver holding third place ahead of the MINI WRC of Derek McGeehan. But there were already worried looks in the McGeehan camp as he wheeled into first service, and destined to go no further. “We’ve broken a drive shaft, but she’s not running right either, she was on three cylinders in that last one,” said McGeehan. A broken fuel injector was diagnosed and he was out.

Second last year, Tristan Pye was another in trouble: “I did SS2 with no power steering, then got a time penalty trying to fix it. We’ve fitted a new pump – and it’s leaking!” As for John Cope, his concerns were rather more personal: “The car’s fine, it’s just the driver that’s not working well.”

Another driver in an unfamiliar car and going well was Paul MacKinnon holding sixth place behind MacCrone: “It’s the first time I’ve ever driven a rear wheel drive car – and it’s wet!” Not his first time in an Escort but first time on Mull, former Scottish Rally Champ Gary Adam hardly got going before picking up a puncture on the first stage and then lost over three minutes trying to change the wheel: “Whoever had tightened the wheelstuds had made them too tight. Grrr!” And added: “The other tyre on the same side went soft on the next stage so we must have clipped something in that first one.”

Donnie ‘The Ditch’ MacDonald lived up to his name on the first stage: “It was just a wee ditch so we didn’t lose much time,” and Shaun Sinclair was going well first time out in his new Impreza WRC. Not so lucky was Ross Hunter in the 2 litre Peugeot 205. According to one knowledgeable spectator who was watching, with bottle of beer in hand, commented: “He was going like a shell, when he passed us – then tore a wheel off it!” Alistair Inglis was another who was going no further when the Lotus Exige broke one of his ‘unbreakable’ driveshafts. He was none too chuffed.

Top 1600 runner was Ian Chadwick in his Honda Civic, but only 3 seconds behind him on the opening test was young Fergus Barlow. Sadly he was destined to go no further than the Hill Road when he took ‘one cut too many’ and the Fiesta R2 slid off into the trees.

Over the next three stages, Duffy continued to stretch his lead but not by much, Harper’s MINI was the meat in a Subaru sandwich as MacCrone clawed back lost time to take third place at the end of the first Leg.

Mounsey was demoted to fourth but far from upset: “That last stage down the Glen was awesome, it was really wet and we were aquaplaning like mad.” MacKinnon moved up to fifth with McGeehan out, and Lewis Gallagher completed the top six.

Richard ‘Steady Away’ Cook was seventh ahead of Cope and Pye, but Tony Bardy was sporting a worried frown in the Focus WRC. He was tenth: “I don’t know if we’ll make the re-start tomorrow. The car has got such a bad vibration that I can’t hear Neil on the Notes. There’s definitely something wrong.” Shaun Sinclair lost a chunk of time over the final three stages: “The power steering pump failed at the end of S2 and I did those last three without it – I’m shattered.”

First time out in his new Proton Millington, Barry Renwick was still smiling at close of play despite: “The windscreen is leaking and the car misted up inside. Steve is sitting there with a bucket between his knees catching the water!” Another who was grinning from ear to ear was Steven Ronaldson in the Millington engined Metro 6R4: “The car was aquaplaning so much down Glen Aros that I had to back off a wee bit just to make sure I got through it, plus there’s lots of mud on the road with folk cutting.”

The crews went to bed in the early hours of Saturday morning, but shortly after Leg 2 commenced at 11.00 am on Saturday came the news that the rally was abandoned. John MacCrone and Andrew Mort crashed out on the second daylight stage, the 4.53 mile Loch Kinloch test that hugs the shoreline of Loch Scridain in the southern half of the island. Nothing could be done for Andrew, while John was airlifted to hospital in Glasgow.

With a third of the rally run on Friday night, the organisers declared those interim positions as Final Results on Sunday to formally bring the rally to a close. That left the leaderboard as it was at close of play on Friday. Initially the organising team had decided to cancel the traditional end of rally cavalcade along Tobermory Main Street on Sunday afternoon to the prizegiving ceremony at Ledaig, but Andrew’s partner Sarah asked that it go ahead as usual. 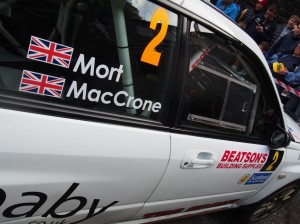 Instead of the customary pipe band adding a splash of colour and noise to proceedings, a silent piper marched at the head of the procession to the gathering on Ledaig Pier where a lament was played and both Andrew and Chris Lawson remembered, followed by a moving tribute spoken by Calum Duffy. It provided a sad but fitting finale to the weekend.