Despite the on-stage rivalry, Mark McCulloch and David Hardie are really good friends. In fact David regularly helps mark out with tyres. Having ‘borrowed’ tyres from David on Wednesday, Mark had a good look at them, and then went to visit Jim Sharp to see if he had anything better. He’d get a jeely piece at anyone’s door, eh?

Saltburn’s Ian Colman visited Dundrennan as a warm-up for this year’s Mull but it would appear there is a bit of a disharmony in the family camp. Ian had a big spin in the second stage with the Nissan ending up well off the road but somehow they managed to regain the road albeit with a puncture. His son Ian was co-driving and when asked what happened, Ian said: “Ian called it – bit I didn’t believe him!” Not ideal practice for Mull then, eh?

Chris McCallum was an early retirement at Solway due to an engine problem. When asked what sort of problem, the deadpan reply was: “There’s a hole in the block.”

Stuart Walker was another early retirement. “I heard a ‘tick’ from the transmission after a slight off when I selected reverse while I was still going forward,” said Stuart, “so we checked the driveshafts back at service and they seemed OK. So it’s either the gearbox (expensive) or the CV joint at the back of the gearbox (cheaper) so I’m going home. But I’m not going to look at it until Monday so I can have a rest without worrying on Sunday!”

Barry Renwick had an on-off sort of day with his Polo S2000: “I had 3 or 4 offs early on then a bigger one at a L7 on the last stage,” said Barry, “It’s a new venue for me and new Notes and it was slippy enough in places to catch you out. I took the Escort to Otterburn and it pissed down so I thought 4WD for Dundrennan and it’s dry all day!” He also let slip that he’s bought a Proton, which might just make its debut n the Pendragon.

Alan Clark’s rally in his Avenger was summed up rather briefly: “The start of SS6 went something like this. 1st gear, off the line, 2nd, 3rd, 4th, jammed. That was it. Retired.”

The reason for Stephen McClory’s retirement in his Fiesta was equally terse: “100 yards from the end of the final stage, off road, hit tree, retired!”

Just 1.3 miles from the end of the last stage, the throttle jammed open on Willie Nelson’s Subaru: “Phew, that grabbed my attention,” said Willie, “so I pulled over and stopped thinking it was just the cable that had slipped out, but it wasn’t. Being so close to the finish I got back in and drove it to the finish with my foot on the brake!”

Greg Inglis’ rally almost ended within sight of the last stage when the Citroen beached itself on a banking and spectators appeared reluctant to come to his aid. Turned out, the ‘banking’ was a compost heap. Still, enough hardy souls braved the pong to come to his aid.

At least he was still smiling after the Solway Coast, but Donald Murray “did more damage here than on his previous 29 events!” The Subaru crested a rise into a downhill ‘don’t cut’ R9, and you’ve guessed the rest. He did cut. “There was a gate dead ahead,” said Don, “but there were big stones across it so I missed it – and hit a tree!” As a first timer at Dundrennan he was quite surprised: “I was flat in sixth in places.”

Niall Cowan Jnr failed to finish when he went OTL after: “We went off at a R9,” said Niall, “it was straight off, on to the grass and through a hole in the fence that someone had made earlier and got stuck. We had to wait for ages to get towed out. Then I ran out of water – and patience!” At the finish the front end of the MG didn’t look that bad but the wing had suffered some severe dents. Niall had the grace to look sheepish: “I did more damage to the car when I kicked it than when it went off.”

Willie Paul and Kenneth Marchbank got a bit lost at Dundrennan on one stage. “On the fourth stage we came across a chicane which had been completely destroyed,” said Willie, “there was straw everywhere and we just didn’t know which way to go, so I spun, smacked a gatepost and got wedged between the two gateposts. It took a multi-point turn to get out and get away again, but we were lucky, the front lip of the sumpguard took the brunt of the impact and although the radiator core was pushed in, there was no leak.”

Bumped into a spectating Bill Laidlaw on the Costa del Solway. The ex Peugeot 206 driver is building an Escort Mk2, but is far from a finishing date as yet. He now has his own butcher’s shop in Dalmellington – and makes his own recipe sausage rolls and pies. Sounds like a visit will have to be made!

On a personal note, there was one major disappointing feature regarding this year’s Solway Coast. There were no shenanigans on the Saturday night. Everyone, even Iain Wilson and Lee Hastings’ boys, were well behaved. Then the bar ran out of Corona and switched to Carling. And there were only two whiskies on offer, Grouse and Bells (and Jameson’s), and the outdoor barbecue was rained off. Methinks we’ll all need to try harder next year. How about ‘Strictly Come Wheelchanging’, juggling with trolley jacks, wheelnut table tennis, jousting on bicycles, or tiddlywinks with landmines? 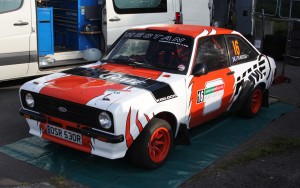 A number of folk expressed worry and concern about Hamish Kinloch’s mental welfare at Solway. Having seen his latest attempt at rally car livery, folk were wondering if it was drink fuelled or drug induced when he got his colouring book and pencils out. However, Hamish himself assured us that it certainly wasn’t drink, and most definitely not cannabis. He can’t afford it. Nope, he’s on his own mix – African silage.

Peter Stewart had a first-time co-driver with him at Solway. As a journalist with ‘The National’ newspaper, Paula McGuire has set herself a number of personal challenges and also a number of sporting challenges, with rallying being one of the chosen sports. A certain Alison Clark got involved and found Paula a ‘sensible’ driver for her co-driving debut. It’s been a year since Peter was last out but after a slow-ish start, Paula was up to speed and so was Peter, resulting in a class win.

Afterwards Paula was very complimentary about the sport and its participants observing: “It was while waiting in line to have my race licence checked that I lost control of my first rally driving preconception. All around me weren’t the arrogant boy racers that I’d entirely expected to see, but instead a warm, eclectic bunch of enthusiasts, ready to throw their all at a challenge and hope it didn’t throw back. And it wasn’t just the race teams that impressed upon me the fact that I knew nothing of the might of rallies. The energy of the marshals, the quality of the free home-baking, even the seamlessness of such a complex registration process, were well worthy of documenting.”

She went on: “Then I met my driver: “Party” Pete Stewart. It’s always a good idea to put your life in the hands of someone so responsible as to have picked up a nickname to the contrary. But Pete, in spite of his nom de guerre, turned out to be the best driver I could have hoped to be paired with for my first rally experience. Patient, laidback, in it for the thrill rather than the championship points: like I said, the best.”

Paula finished with: “My overriding memory of my day as a rally co-driver, though, will not be the hay bale chicanes or the lingering fuel smell, not even the sickening waits as the course was cleared of debris from the misfortunes of others. Instead, I’ll remember the atmosphere, the camaraderie and the people, many of whom had known each other since childhood and the junior rallies, such as was run the following day.”

If you’ve got a couple of minutes, it’s worth reading her whole article. In fact, I learned something too!
http://bit.ly/1NWC5sJ
**