Kielder’s Kiss of Kindness for Faulkner and Foy 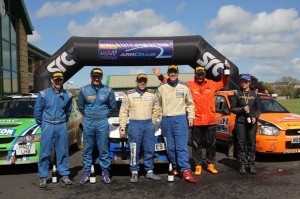 The best thing about a good kicking is, when it stops. There have been times over the past four years when Mike Faulkner and Peter Foy were wondering if it would ever stop. There have been quite a few bumps and bangs along the way, although there have also been a few runner-ups and third place finishes, but that stop step has remained tantalisingly out of reach.

However, it was sorted last weekend. For the first time since 2011, Faulkner and Foy claimed victory on the Jim Clark Reivers Rally. It wasn’t easy, just six seconds behind at the finish were Peter Taylor and Andrew Roughead. In third place were Jock Armstrong and Paula Swinscoe, and but for a one minute penalty they would have claimed their second victory of the season.

This year’s Reivers was different though. No closed road tarmac, it was a one day rally in the forests. That was down to the Chief Exec of Borders Regional Council. Despite support from the local MP and MSP plus councillors she wasn’t up for a closed road event this year. Hopefully that will be sorted for next year.

In the meantime, to maintain the continuity, the organises reverted to the origins of the event – gravel stages. The rally did retain some links with past events as it started and finished in Kelso, but all the competition was outwith Berwickshire county – in Northumberland.

If it was dreich in Kelso it was bitter over the border. Service was on a wide grassy stretch of exposed moorland where the only things that moved quickly across the landscape were winds and wintry showers. That meant wet and slippery stages, but later in the afternoon it kind of dried out a bit and the sun even poked its way through the murk by late afternoon.

Last used on the RAC Rally in November, the Ogre Hill opening stage was the worst of the day, but let’s put the word ‘worst’ into context. There were only a few wee bits which still bore the marks of passing rally cars, the majority of it was fine, as it was for the rest of the stages.

It was a very short event for David Bogie. At Scrutineering the night before, he commented that he was only here because the Fiesta R5’s engine was due a rebuild: “I’m doing Donegal in two weeks time in the Escort so this was the ideal time to get the Fiesta engine rebuilt,” he said, but was forced to retire in the very first stage: “When the oil light came on I shut it down and switched it off.” He was not alone, Brian Bell had to stop with an engine problem in his Focus WRC after white smoke (or steam) was spotted pouring out from under the bonnet.

Faulkner and Armstrong therefore topped the time sheets at the end of the first one, tied on identical stage times. Only five seconds slower was Peter Stephenson who is really getting to grips with his Focus WRC these days and he was five seconds up on Peter Taylor in his Focus WRC. Perhaps the biggest surprise was Rory Young’s pace. He had hired Dom Buckley’s R5 Fiesta and despite his unfamiliarity with the beast was fifth quickest ahead of the S2000 Fiesta of Matthew Robinson. Mind you, Robinson was delighted with that. He had spent the previous day on the Severn Stages in a RHD Escort and here he was in a LHD Fiesta.

Across the road, there was just one driver under the 6 minute barrier for the six mile Rooken Edge test, Jock Armstrong. He was only a second under it mind with Taylor only a second slower and Faulkner another second slower. Stephenson was 10 seconds down on Armstrong’s time and you can put that down to ‘confidence lifts’ on some of the crests as this is a stage that gives outsiders some idea of the diameter of male driver’s dangly bits.

Robinson was managing to stay in touch despite having to think twice about which side of the road to place the car on and Bruce McCombie, just outside the top six on the first stage, was inside the top six this time, just! Eighth fastest on the opener, Andrew Gallacher was about to head for home. The Fiesta had punctured its radiator.

Rory Young missed out on a top six time and smiled: “Getting 80% out of this car is easy, it’s that last 20% that separates the men from the boys!”

The third test at Harwood was a full 10 miler and Armstrong stepped on the gas. He was 12 seconds faster than Taylor. “The car wasn’t right over the first two stages,” said Armstrong, “it was too soft, and when I braked, the nose dived down and the rear end wanted to come round, but we stiffened it up one click on everything all round and it was better.” As for Taylor, the pace was there initially but dropping off towards the end: “We seem to have a problem on the longer stages, the brakes are fading badly towards the end.”

Faulkner was still in touch, but four seconds behind Taylor with Matthew Robinson ahead of Stephenson and McCombie.

Armstrong was quickest again through Sidwood from Taylor, but there was a problem. Despite four fastest times, he wasn’t leading the rally. Interim results sheets showed Taylor at the top of the leaderboard by one second from Faulkner with Armstrong showing in third place. He appeared to have incurred a one minute time penalty at the Rally Start MTC earlier in the day and despite having queried it, it was still there.

Stephenson was best of the rest this time from McCombie and Robinson, and Rintoul struck trouble again. The Hyundai negotiated a Right 5 on to a bridge but was too quick over the following crest into a Left 7. The car slid wide into the ditch and took a tree out.

The top three went into the final 12 mile Comb test not quite sure of positions. Taylor knew he had a second on Faulkner, but neither were sure of Armstrong’s position. Would the penalty stand, or not? Also, this was the longest stage of the day and Taylor had concerns about his brakes.

Armstrong lit the blue touch paper and disappeared. No real surprise, he scored his fifth fastest time, but he was still third overall, or was he? Faulkner was on fire too: “I was struggling with confidence in the car today,” said Mike, “it just didn’t feel right, but I adjusted the brake bias a bit more to the rear for the final stage, and it worked!” Going the other way was Taylor: “The brakes were fine at the start, but there was nothing by the finish, I wasn’t sure if I had done enough to stay ahead of Mike.” He hadn’t, Faulkner pipped him by 7 seconds. Not a lot over 12 miles. Is it?

Stephenson was still on the case, fourth fastest ahead of Young and Robinson, but then the forest fell silent, apart from the sirens. Allan McDowall and Gavin Heseltine had gone off in the Escort. It wasn’t a big hit, but it was well wedged into a ditch and they were having trouble getting Gavin out, hence the call. Some 45 minutes later the rally resumed with Allan and Gavin more concerned about sore wallets than sore heads.

The top three final positions were therefore undecided as the crews returned to Kelso but Peter Stephenson had confirmed his fourth place in his Focus WRC ahead of Robinson in fifth: “The grip is phenomenal,” said Matthew, “but what this car needs is a proper driver!” Regardless of his own opinion, I think he was doing alright.

Rounding off the top six was Bruce McCombie who was a bit dis-chuffed at the finish of the last stage: “That was shite,” he said, “I stalled it on a Left 9 and then I got erratic after that trying to get the time back. I should know better.” Still, his third place points finish in the ARR Craib Scottish Championship ensured he still tops the points tables after four rounds.

First time out in a Fiesta R5, Rory Young was getting quicker all day and although he missed the turbo power of his Lancer, he couldn’t fault the handling or the brakes. Mark McCulloch finished a tenacious eighth: “The rear diffs have been clunking all day, the centre diff failed, the roll pins came out of the brake callipers and the pads fell out, and we had to pump the brakes in the last stage to get a pedal. The only clean run I got was in the fourth stage!”

Freddie Milne finished ninth just ahead of John McClory in the Lancer, but he was still disappointed: “I’m annoyed with myself,” said Freddie, “I keep giving away too much time and spinning wheels everywhere. I’m still struggling with the Notes. Neil (Shanks) is really good and patient, but I need to do better.” McClory was smiling, as ever: “I had the engine re-mapped during the week,” he said, “I felt the power was too on-off compared to the Subaru. It’s much smoother now and it’s made a difference.”

Fraser Wilson just missed out on a top ten finish: “We ran wide on a Left 7 and got a puncture for the last 4 miles of the final stage.” Still there was one consolation: “If it had been a Left 9 – I’d have been well off!”

Meanwhile back in Rally HQ, there was the ‘small’ matter of deciding who actually won the rally to be sorted out. Despite the fact that Faulkner, Armstrong and McCombie had already celebrated with champagne as the top three Scottish points finishers, the one minute penalty was still showing in Armstrong’s total and he was pretty adamant that it was wrong.

Eventually the time cards and check sheets were compared and it would appear that although the Arrival Time (with 3 seconds to spare) had been noted correctly, the actual time of departing the Control was technically over the minute. So the minute was taken off. Then another one was added.

Apparently this was for cutting the grass and speeding in the showground as Armstrong arrived at the Rally Start, both prohibited by the organisers. A lesser man would have wept, but Armstrong eventually accepted the new penalty.

That meant Faulkner scored his first outright victory since the Merrick in 2011: “Of course, it’s not the way you want to win. Jock’s times were unbelievable and Peter (Taylor) was very close. We went as hard as we could in that last one and I still couldn’t get near Jock’s times.” Mike and Peter couldn’t suppress their smiles at the finish, but there was also a bit of relief in there as well. Sounds like the Scottish could be another good fight.