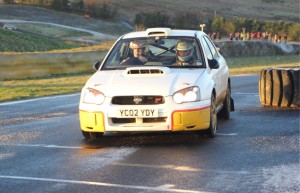 Michael Glendinning and Paul Hughes won last week’s Grant Construction Knockhill Stages Rally but with three stages to go they were dead level with Ian Paterson and Helen Brown. “The last time we did a rally, we were leading at the half way point and then the car had a problem and we didn’t finish,” said Glendinning, “and when we spun off on the fifth stage today, I thought, here we go again.”

Despite that little indiscretion he went on to win the rally by 20 seconds from Stuart Walker and Julie McGuire – with Ian and Helen completing the top three. It was an eventful day all round.

The fun and frolics kicked off on the first stage. That was down mainly to conditions. There was ice and dampness all round the circuit and the sun was barely keeking over the horizon as the first cars nosed out on to the first of the day’s 8 stages. Grip? It was slithery and slidey all the way.

Glendinning was fastest on the opener by 4 seconds from James Gibb who was 3 seconds up on Paterson with Gary Adam, Charlie Shaw and Nigel Feeney all setting equal fourth fastest times. All in Subarus, apart from Adam who was finding grip in the MkII that eluded others.

First retirement of the day was Craig Gibson’s Mk1 which expired less than half way round the first stage with complete electrical failure. He was followed in rather more violent fashion by Billy McClelland and Des Campbell. Both accidents were down entirely to conditions. Just as the cars crested the rise on the Start/Finish straight, the low sun struck the windscreens. Both the Opel Kadett and Peugeot 206 missed their braking points and struck an earthmover sized tyre marker. Billy spun off with damaged suspension and Des followed suit with broken steering.

On the next stage, Andrew Gallacher and Donnie MacDonald were fastest by 5 seconds from Glendinning with Paterson just two seconds adrift and racing driver Alan Kirkaldy the quickest of the RWD brigade in his MkII. Then another couple of gaps appeared in the entry list. Kevin Ronaldson outbraked himself into the chicane on the S/F straight and the Metro twitched and spun quicker than a bolt of lightning. Kevin didn’t have a chance as the car slid backwards into a large tyre. There wasn’t much damage but KwikFit didn’t have a 6R4 exhaust in stock and anyway, the oil tank was punctured. Pete Garrow’s departure was much less dramatic. The unusual Audi TT broke its diff.

Glendinning was fastest over the third test but by only a second from Gallacher with Paterson and Stuart Walker tying on third quickest stage time. There was no let up in the retirements list either. Gary Adam broke a driveshaft and was last seen trying to poke broken bits out of the diff with a screwdriver: “We have a spare shaft but it would be too risky to replace it with bits still inside the diff casing, so that’s it.” And after a good start to the day, MacDonald was out, the Lancer developing an engine problem which stopped play. 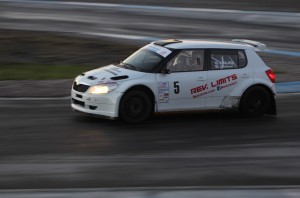 In the fourth test it was Walker by a second from Paterson with Kirkaldy a superb two seconds behind and one second up on Glendinning who had a tyre roll off the rim with a mile to go. He was still third quickest, one second up on Jim McDowall, but this time Gallacher and Iain Wilson were going no further. Andrew gave the Escort Cosworth a whack on the far side of the circuit while Iain pulled into service with a broken n/s hub in the Nova: “I broke a hub on the Galloway Hills and then broke the other side today. They were both new having replaced broken hubs earlier in the season. I’m fed up with it.”

At the half way point, Glendinning had a 14 second lead over Paterson with Walker another 9 seconds behind in third place. Alan Kirkaldy was fourth ahead of Nigel Feeney and Charlie Shaw.

By this time the sunshine was heading for home and with it the temperatures plummeted, what was previously cold became bitter. Failing to acclimatise quickly was the rally leader. As the Subaru disappeared over the crest of the hill at the end of the S/F straight, the rear end got away from Michael and the car executed a huge spin down Duffus coming to a halt inches from the barrier on the gravel run off. No damage but 16 seconds down on Walker who had also pipped Paterson by two seconds.

Nigel Feeney appeared at the stage finish with tape streaming from the aerial and rear wing: “My fault. I heard a ‘Left’ call and I turned ‘Right’. The car had no reverse gear since the first stage so we were stuck and had to get pushed out. No damage, but got a Maximum for the stage.” Not so lucky was Graeme Rintoul, retiring the Fiesta with “nae gears”.

This interesting turn of events had one rather surprising outcome. With 5 stages gone, and 3 to go, Paterson was now sharing the lead with Glendinning, and Walker only 7 seconds behind the pair of them. Game on, as they say. 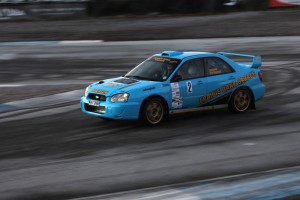 Stage 6 saw Glendinning back on the pace, 4 seconds quicker than Walker who was 2 up on Paterson but the lengthening retirement list claimed another victim. Lee Hastings had worked his way back into the top ten by the half way mark after two “silly wee offs” on the slippery first stage but on the fifth stage: “Something went ‘whoof’ underneath the car and flames came through the footwell.” He pulled off the circuit and used two ‘approved’ fire extinguishers on the blaze which failed to put it out and had to wait for more. Fortunately, it was mostly wiring damage and it would appear that the more important greasy bits are all OK.

“I didn’t breathe at all, all the way round that last stage,” said Glendinning, “I’ve led events with Paul before and not done it. And I had run out of tyres – I was on slicks!”

It was enough. He was 3 seconds quicker than Walker who put in his own mighty effort on that last test to beat Paterson by 8 seconds on the stage and grab the runner-up position by 5. How close was that after 8 stages?

If it hadn’t been for young MacBeth (more later), my ‘Drive of the Day’ would have been the fourth placed finisher, Alan Kirkaldy. On only his second ever rally the twice BMW Compact Saloon Car Racing Champion was impressively quick on the race track stretches of the stages but equally important, he was impressively quick, and relatively tidy, on the off-track sections to finish just off the podium in fourth place.

And to those who think Jim McDowall is all banter and bluster, fifth place proved that his years in a Talbot Avenger disguised his true driving talent. Still getting to grips with his Subaru Impreza, he was grinning from ear to ear as he crossed the line, his smile bettered only by Charlotte sitting beside him.

Another racer was sixth. On his first rally, and first time out in a Subaru Impreza Charlie Shaw proved he could master a car with less than half the horse power of his 600hp Ford Focus.

In seventh place overall was the top 1600 runner, Scott MacBeth. Having converted his 1400cc spec Vauxhall Nova over the winter to 1600cc he was giving Iain Wilson a run for his money until Ian’s hub broke. A pity that, it would have been a good battle. Even so, Scott was lucky: “A wheel bearing started to come slack with three stages to go, but it was OK, we kept an eye on it and just tightened it up at the end of each stage.”

Newly crowned Scottish Tarmack Champion, Paul Ballantyne finished a steady 8th in his Renault Clio ahead of Ross Hunter in the Peugeot 205 which had a puncture on the first stage then a broken wheel stud which required a hub change during the lunch halt. Rounding off the top ten was James Gibb in his Impreza.

Scott MacBeth therefore won the 1600 class with Donald Bowness second in his Nova on only his second ever rally – and he didn’t finish his first one!

Not that I’m racist or nationalistic, but there was only one English crew in the top ten, and look how well they did. But what a fight it was!