The 2014 Rally Wales GB gets underway next Thursday evening in North Wales and there’s quite a few of our lot heading south to take part.

In the National Rally, Mike Faulkner and Peter Foy are seeded fourth (204) just ahead of Barry Groundwater and Neil Shanks (206) as the number 6 seeds, both crews in their Evo9s. Calum and Claudia MacLeod are next up (217) in their MG S2200 Mugen – the clue is in the name, it’s got Honda power for Wales!

Ross Hunter got a free entry (226) to the National courtesy of his Challenge victory in this year’s BRC but has still to finalise plans regarding such luxuries as a car and co-driver! Jim McRae and Pauline Gullick have entered the Vauxhall Firenza (229) but Jim is keeping his options open – he has access to a 2.3 litre car as opposed to the monster V8 beast he’s been using all year. According to Jim, the weather outlook will determine which one he uses. Running at number 267 are Geoff Goudie and Chris Robertson in their Impreza, so that’s another crew to keep an eye on.

Further down the entry list (277) is ‘the Teacake Kid’ himself, Stuart Loudon who will be partnering cricketer Graeme Swann making his rally debut in an M-Sport Fiesta R2. A couple of reserve entries have now been confirmed with John Morrison and Peter Carstairs running their Evo9 with the number 294 on the doors and Andrew Gallacher has got a run in his Evo9 at 296, but has yet to find a co-driver.

There’s a few other entries in the National list whom we regard as friends up here and these include Matthew Robinson and Sam Colliss (209) in a Fiesta and Paul Benn/Richard Cooke (210) in Paul’s 02 Focus WRC as well as Carl and Rob Tuer who have entered their MG ZR at 227.

Sadly we don’t have any headline Scots in the International entry so Kris Meeke and Paul Nagle are our ‘adopted’ favourites along with Elfyn Evans and Daniel (Mull fan!) Barritt. Joining the works Citroen and M-Sport crew on the International Welsh stage are Matthew Wilson and Scott ‘Scoot’ Martin in a Fiesta.

However, the big favourites here are our very own champs, Euan Thorburn and Paul Beaton (winners of the Rally Wales GB National last year) and now entered (81) in the International event in a ‘borrowed’ Fiesta S2000 this year. They’ll be up against David Bogie and Kevin Rae (45) in the Fiesta R5 with Tony Jardine (he was born in Scotland) and Peta Cavendish (93) in an Evo9. Kirsty Riddick has got a run too, with Jonathan Greer (90) in his Citroen DS3 RT. And running with 99 on the door are Garry Pearson and Dave Robson in the Peugeot 208 R2. 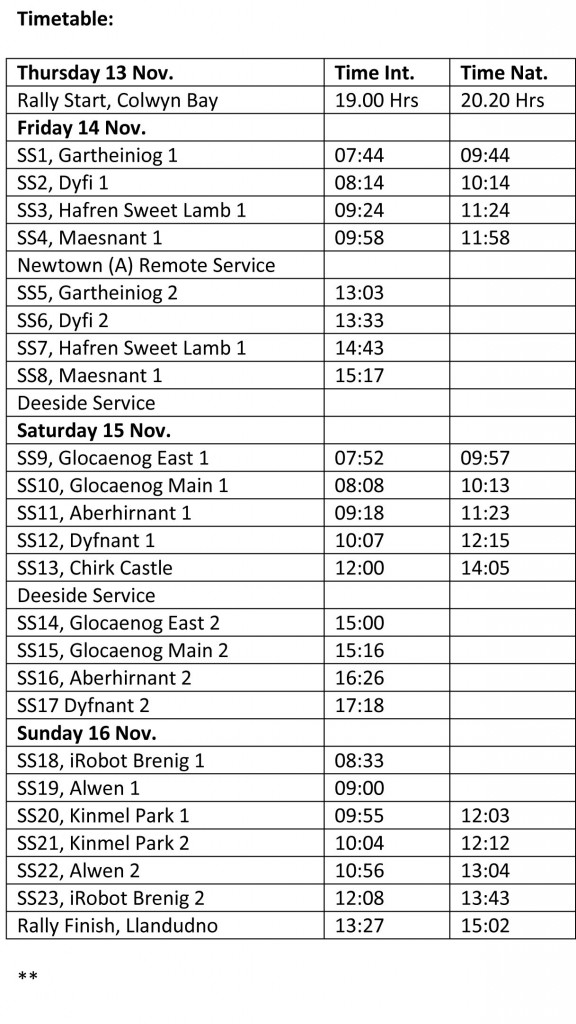