The ‘Juniors’ put on a stirring show at Knockhill last weekend on the fifth round of the Brick & Steel Ecosse Junior Championship where victory was decided by ONE second. But here’s a thought, given the closeness of the competition, the maturity of the youngsters and the growing confidence – plus the fact that some of them are taller than me – should we be trying to come up with another name for ‘Juniors’? Given the spectacle they put on, it’s beginning to seem quite wrong to call these young men and ladies, ‘Juniors’. Just a passing thought. 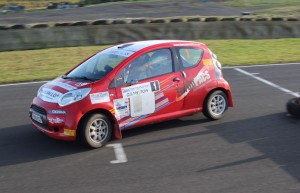 Anyway, back to the match. For sure, Alexander Vassallo and Neil Colman were expected to win the rally, given their dominance over the past three seasons, but this time the Hexham lad was pushed all the way by Dylan O’Donnell and Tom Middlemiss.

Never more than 3 seconds ahead, Alex commented afterwards: “I thought we’d lost it on the final stage. We locked up and slid into the final chicane and dropped 7 seconds, but then Dylan did the same. It took me a bit of time to get reverse out and get going again but because f that I had widened the exit, but Dylan didn’t know that at the time!” 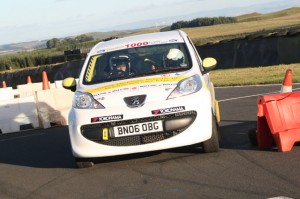 With no Junior rallies in Ireland till the end of October, Armagh’s Peter Bennett made the trip to Knockhill for some additional ‘seat-time’ in his first season of rallying, and was rewarded with an excellent third place ahead of Brandon Walsh who survived the demolition of two chicanes during a busy day for the Marshals. Brandon had a bigger fright when it looked as though he might be penalised for not finishing a stage because he had run out of petrol. He just managed to splutter across the FF line but fell short of the Stop line, but pushed the car to the side to clear the way.

Craig MacIvor lost out on a top four finish when he was penalised for a jump start and dropped to ninth. Me? I reckon the lad just has very quick reactions, and that’s all down to living with his Dad Ian – he’ll need to be awfy quick to beat his ol’man to the leftover roast tatties and last night’s pizza slice. “I didn’t enjoy the morning stages,” said Craig, “they were too twisty and had no relevance to the maps, but the track stages were best. It almost felt like being a Touring Car driver.”

Rounding off the top six was Finlay Retson on only his fourth rally: “I didn’t like the tight bits,” he said, “but really liked the fast bits,” he beamed, and then added: “I’m going home now to check the Go-Pro tonight and go through it all again to see where I went wrong and where I could have gone better.” See what I mean about maturity.

Harris Wilson finished seventh just ahead of Michael Robertson lost out on a top placing when he hit a tyre wall on the 7th test after getting a wheel on the grass. “It cracked the windscreen bottle so I couldn’t wash the windscreen and see where I was going and it knocked the tracking out a bit, but we finished,” said Michael.

Harry Chalmers finished 10th on his fourth event, but only after a trip into the quarry on the seventh test and had to be pushed out by Marshals while Dale Kelly rounded off the finishers, but he had a ‘new’ co-driver, Graeme Sherry standing in for Pete Weall. Maybe that was why they pushed a cone all the way round Knockhill on one lap after some inadvertent contact with a chicane.

Brodie Balfour didn’t finish after problems with his brakes which caused a few chicane re-arrangements and Cameron Russell smacked the concrete pit wall on the S/F straight. He was carrying just a bit too much speed through a chicane and didn’t quite manage to get the lock off quick enough and hit the wall with the front n/s corner. He nearly got away with it though, but the front wheel was still in the process of turning when it caught an edge in the concrete and that was sufficient to push it back into the ‘well and bent the steering arm into a U shape!