You are here: Home » Rally News » 26 Aug: Postcard from Solway

… Postcard from the Solway Coast …

As for the planned appearance of Jim McRae in Harry Marchbank’s 1300cc Micra, that didn’t happen. Jim turned up bright eyed and bushy tailed on Sunday morning, but the car was already on a trailer home. ‘The Boy’ Harry explained why later, but was being rather economical with the truth when he described the incident as a “slow speed off into a ditch”. Strictly speaking, that part was true, but it was the bits leading up to the “slow speed off” and afterwards that he omitted to explain. What he failed to mention was the speed he was carrying over a crest into a fast right. Even so, everything was under control till he got a wheel on the grass on the outside, and that was it. He managed to scrub off some speed, but the Micra still ended up with its nose in a ‘ditch’. Only it wasn’t so much a ditch as the drain round the foundations for a brick building. Fortunately, the building arrested the forward momentum of the Micra without too much crew-shoogling inside the car, although the brick face now has the 3-dimensional imprint of a Nissan Micra on its facade – so he can’t deny it when the owner turns up!

Scott Peacock’s uncharacteristic roll on the Speyside was caused by a steering breakage. The front corner of the 205 dug in and tipped the car over. So he had to borrow Dad’s (Donald) Peugeot for Course Car duties on the Solway Coast. Naturally the ‘loan’ came with the usual ‘fatherly advice’, or ‘threats’ to you and me, about what would happen should the paint be scratched or a panel bent. With a distinct tug of the forelock and assurance that it was only for Course Car duty, acquiescence was duly offered and accepted – but only till the ol’ man was out of sight. Why else could the car be seen weaving furiously on the way to the first stage warming up the tyres? According to Scott he was just avoiding the puddles so he didn’t get mud on the car!

Speaking of the Peacock clan, it’s worth pointing out that much of the success of the Junior event at Solway is down to them and Keith ‘Chooksie’ McMath. They spent many man hours and used their own backhoes, rollers and pavers to construct the necessary road links on site so that the youngsters could have a proper rally without the need for any public road driving. For sure many other folk from the club and surrounding area all lent much manpower and lost gallons of sweat over past months doing the labouring and it’s a great tribute to them all that the youngster left Dundrennan, drookit, but with huge smiles all round. Nice one boys and girls.

One of the more welcome, regular visitors to Scottish rallying from the deep south at Dundrennan was Citroen DS3 driver James Ford from Blackpool in his Dad’s Impreza. Chris had contested the Tyneside Stages the week before and apart from a ‘minor excursion’ there was no damage, so James had borrowed the car for a run out at Dundrennan. “The stages are good,” said James, “but I would have liked a recce! I got caught out by a 90L which was in fact a 90L into a wide hairpin left. Almost a double Left in fact. I got the first one OK, but spun and stalled trying to get round the second one.”

Jamie and Charlotte McDowall were contesting the Solway Coast in the family Focus but a frayed gear change cable stopped play. With no spare cable they tried to smooth the frayed ends and cover them up with tape and tie-wrap, but no use. Then faither belatedly turned up later in the day, rolled the sleeves up and disappeared under the bonnet. Result? It still wouldnae go, so he couldn’t shout at the weans. But where was he when he was needed? Jim was actually providing the commentary at the local Creetown annual festival and announcing the winners of the bonny vegetable and biggest baby competition – or should that be the other way round?

Like an idiot’s version of ‘Neighbours’, the ongoing soap opera which is Lee Hastings Rallying took another twist at Dundrennan. It would appear that Lee had one and a half cars competing at this year’s event! So how did that happen? Well, before we start you need to know that he has two cars and three sets of suspension. Don’t ask, it just happened. Anyway, Lee had a wee bit of an altercation with a dry stane dyke the week before at Tyneside, but come Wednesday, the right foot started to itch so he decided to put his good suspension on car number 2 so that he could do the Solway Coast. And since both cars are kept at Richard Dickson’s place, Richard did all/most/some/not much of the work (depending on who you believe) refettling the second car. Anyway, once he had finished that, he looked at all this suspension lying around and reckoned it was better than what he had on his own car. So he stripped his own Subaru and fitted Lee’s suspension to it – and a diff, and the wheels and also the tyres. Anyway, fast forward to Saturday, and Lee’s rally didn’t last long when the Subaru snapped sideways on a straight on the first stage and pitched him into a field. So there he was, standing on the banking watching the cars go by. Along comes Richard who flies over the yump, lands all square on the deck and blasts off into the distance. “Phew, that was quick,” said Lee to co-driver Drew Sturrock, “he’s going well today, that landed fine, surprisingly well in fact.” Later that night when the internal embrocation was doing its work, Lee was praising Richard for his performance, when Richard admitted the truth. He had in fact ‘borrowed’ Lee’s bits and tyres and had somehow overlooked/forgotten to tell Lee, so that’s how Lee had one and half cars competing on the same event. Friends? They’ll be doing ‘spoons’ next.

Young Murray Coulthard was going like a ferret with a firework on its tail at Solway and won his class by nearly 2 minutes and that even included one stage when the gearlinkage broke. All was revealed at service when the Nova was jacked up and revealed a full set of rallycross tyres. Apparently the tyres were sourced by his ‘uncle’ (nudge, nudge, wink, wink, say no more) who is a brand ambassador for Cooper Tires (Yes, I know it’s American spelling but that’s how they spell it!) and blagged a set of Avons for the boy. According to Murray they were “really good”.

There was no grassy slope downhill tea tray racing in the early hours of the Saturday night at Solway, apparently because the canteen staff had got wise to the previous year’s shenanigans and had spirited them all away at close of play this year after the evening meal. However, what subsequently took place will only serve to remind overnight camping parents to lock up and hide away their weans bikes to prevent internally lubricated adult dafties from purloining these machines for their own version of the Tour de France under the camp security lights. It should also serve as a reminder to responsible adults to ensure their weans have adequate knee and elbow scuff protection. They’ll need Germoline in gallon jars next year.

Never happier than when he’s got something to moan about, Gary Adam was looking a bit lost at close of play on the Saturday afternoon of the Solway Coast Day 1: “We had a good meal in the canteen last night and accommodation in the Officer’s Mess, for four of us, and all for 60 quid. Where else can you do that? Normally that wouldn’t even cover B&B for one on any other rally!” And he added: “And an excellent day’s rallying and a great venue.” Methinks EventScotland should sign him up to promote tourism, on the basis that if Gary’s smiling, then the whole world will smile too. Just a thought.

And now, a valuable lesson for those who over-indulge their liquid pleasures. Make sure you know exactly which room you will be sleeping in, and which dormitory block that room is in, before heading to the bar. One stalwart, who shall remain nameless and who had a room booked, failed to do a recce before hand. When the bar closed and everyone departed, he didn’t know where to go, so slept on the sofa. 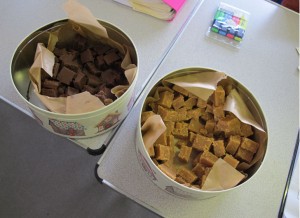 Tablet trauma. As if life wasn’t difficult enough. There was a third tablet baker at the Solway Coast. Marilyn McMath turned up with a big tin of sweet Scottish sumptuousness, and purely in the interests of scientific progress I had a wee taste, and it was different to both Rhona Dickie’s and Irene McCulloch’s culinary calorific concoctions. It was Rhona who started it last year with her regular Junior 1000 Rally supply of firm, sookable sweetness, then Irene turned up at Speyside with her soft and succulent instant melt, and now the latest tableteer, Marilyn, appeared with yet a different recipe, this one with a distinctly bitey crunch which then dissolved on the tongue. But which is best? It’s beyond me, we need to get Mary Berry and Paul Hollywood on the case. We truly need a Great Scottish Tablet Taste-Off.