Stonehaven & District MC will be running their ‘E.Watson and Son Rally Time Trial’ on Saturday 19th July at Coneyhatch Farm just to the north of Stonehaven on the B979. This will be the second round of the SACC RTT Championship. The Time Trial will use parts of the training stage built by Brian Watson while Quintin Milne has loaned the use of his Aberdeen Rally Centre facilities, and if those two individuals don’t turn up, then the thing should run pretty well, eh?

East Ayrshire Car Club will be holding a ‘Classic Vehicle Show’ at Kames, Muirkirk, on Sunday 3rd of August and have already received some interesting entries. So if you didn’t make it the Speyside Stages at Elgin the day before or didn’t fancy the trek to Otterburn on the Sunday for the Tyneside Stages then sate your desire for motorised metal here.

Looking a wee bit further ahead, there’s another festival of speed looming which will rival the recent Machrihanish bash. The ‘Usedcarparts.co.uk Solway Coast Rally’ based on the sun-soaked Costa del Solway at Dundrennan will be staging their own two day spectacular over the weekend of 9/10 August. There will be a full-blown Senior stage rally on the Saturday before the Juniors take centre stage on Sunday. To improve the roads network, Donald Peacock and his team (including ‘the boy’) have laid down over 100 tonnes of tarmac creating new stretches of roads and still have another 40 tonnes to lay to complete the new link roads ahead of next month’s brammer of an event.

Gary Tomlinson in a Subaru won last Sunday’s P&R Benn Greystoke Stages Rally but we had a top six finisher and a class winner. Lee Hastings and Brian Findon finished sixth overall in their Subaru while Angus Lawrie and Heather Grisedale finished an excellent 16th overall and first in class in their Vauxhall Nova. Other notables included Carl and Rob Tuer 13th overall and first in their class with the MG ZR while Michael Glendinning and Jane Nicol retired after the first stage with gearbox trouble in the Subaru. Barry Lindsay got a wee bit further in the Peugeot 106, but broke a driveshaft in SS6.

Paul Bird won last Saturday’s BTRDA Championship event, the Nicky Grist Stages Rally in his Ford Focus WRC, but by only 3 seconds from Dave Weston Jnr and Kirsty Riddick in the Subaru. Wayne Sisson and Neil Shanks were 8th in the Mitsubishi EVO 9 while Allan McDowall and Gavin Heseltine were 23rd in their Ford RS1800 and third in the Historic class. Ryan Weston and Mark McCulloch were 43rd o/a in the 1400cc Proton Satria and third in class, while David Martin and Richard Simmonds retired their 1400cc Vauxhall with gearbox trouble on SS4.

Ed: I make no apologies for publishing the full content of an email I got on Monday morning, but it was welcome news indeed. I can’t claim any credit for the heading either, that was entirely down to the author:

Heading: Concern at Ayr Hospital as senior co-driver drooling uncontrollably and speaking incomprehensively …
Sub Heading: … but reassured that he was like that when he got in the car !

Probably too minor a moment to merit any column inches, but you can always embellish to fill a wee paragraph! Punchline is that we were both discharged about 7pm last night (Sunday) with bumps and bruises and nursing sore backs, but in light of the sudden stop not too bad – although Mikey has some fluid on his lungs suggesting some bruising and will be a wee bit breathless for a few days.

By all accounts we didn’t do any half measures, but the cage, helmets HANS and belts all did their jobs and the car is relatively straight and was driven out of the stage afterwards.

I have written to the EMMU and Merrick Rescue teams and thanked them for their very professional and considerate care in dealing with two belligerent rallyists who didn’t want them cutting anything, but it was their own faults – if they’d just given me the morphine like I asked then they could have done what the hell they liked !!

Pleased that the event managed to complete after our incident and look forward to the results to see where we came !

Seriously I don’t feel that it was anything more than an accident as Mikey followed the line of previous cars and that once sideways on the grass it was just a matter of luck if we carried on sliding across the infield or dug in and rolled – would have to be the latter though. Only wee concern was that we might have slid right back onto the track into another car, and the fact that there weren’t sufficient marshals to have yellow flags out – but all told it was another grand day out at Kames – I do just hope there isn’t an over-reaction and they impose any restrictions on the Juniors – it’s just exuberance and even some 32 ( or 52 ) year olds haven’t got that out of their systems yet !!

( Ed: Cheers Martin, thanks for the update, much appreciated, and great that you and Mikey are OK.)

Ian Shiells was at Kames at the weekend doing his co-driving bit for one of the Juniors, Brandon Walsh, and said he had already found a solution to his own car’s problem after the Machrihanish adventure. The 2 litre Honda engine in his BMW 318 had expired and was emitting blue smoke at the Kintyre event. “I originally bought the car with a 4 cylinder BMW engine,” said Ian, “but installed the Honda S2000 engine as a cheaper source of more power, however, I’m going back to BMW power after this. I bought a BMW 328 in Glasgow for 750 quid – and drove it home as it still had a year’s MOT on it! It will be a fairly straightforward job to put the 6 cylinder, 3 litre unit into my own car using the engine mountings from this donor car. I’ll also be able to use lots of other parts plus the alloy wheels, so it was a pretty cost effective way of replacing the engine and getting more power!”

The McCulloch family were spotted spectating at Kames, with Paw and ‘the Boy’ getting agitated as they watched the cars going round. When asked if they had retired, Blair explained: “No, it’s just taken a lot longer to build the new Nova than originally planned. That’s nearly two years since we started it and it probably won’t be ready till the Galloway Hills this year. We’re at the dry-build stage now and having an exhaust made for it. It will still be a Vauxhall 1600cc 8v engine but there’s lots of new bits and modifications compared to the old car, hence the length of time. For instance, it took quite a while to get the new gear linkage right. It sits much higher than in the old car, it’s just wee things like that which are taking so much time to get right.” 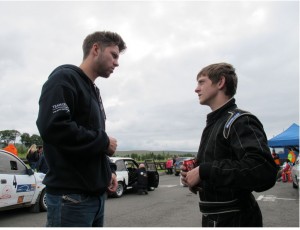 An interested ‘bystander’ at Kames was MSA Academy mentor and coach, Adam Gould. The rallyist and racer had spent some time with the Juniors on Saturday afternoon and evening and then on Sunday spent some more time watching them, having a word, between stages and then watching some more. All of the youngsters felt it was a positive experience and they all learned something from the advice offered. Nice one Adam.

Dylan O’Donnell turned up at Kames with his ‘new’ Peugeot 107 in place of his Nissan Micra: “I had an hour in it at Knockhill before I came here, so this was my first event in the new car,” said Dylan, “it really is quite different. Some parts at Kames used to be flat in the Micra – not now!” Looking ahead, Dylan’s rallying career is set to become more difficult as he takes up a place at the Silverstone University Technical College in September to train as a race technician: “It was brilliant,” he said, “When I went for my interview at Silverstone, there were two F1 cars on one side, a WTCC race car on the other side, and next door there were 20 Formula Fords.” As to his longer term future, Dylan doesn’t know: “I still want to drive, but if I get a job as a rally or race technician, then who knows.” Best of luck Dylan, from all of us.

Had a wee chat with a spectating Bob Harkness who turned up at Kames for a nosey with the Missus and daughter Amy. In fact, Bob was looking rather splendid wearing his brand new ‘bunnet’ which apparently Gail had bought him. Sadly the sartorially elegant look was rather spoiled by the baggy shorts, sockless baffies and peely waally legs. Anyway, it would appear that Amy fancies having a wee go at the this rallying lark: “She’s 16,” said Bob, “and she has a wee Ford Ka which she’s driven here at Kames at track nights before. Sitting beside her is quite scary as she doesn’t quite understand yet what the consequences might be if she gets her braking wrong or takes a corner too fast.” Which prompted me to remind him that he was a bit wild in his own youth: “That was a mistake. I nearly didn’t get started in the sport at all,” recalled Bob, “my first rally was the Trossachs in 1979 and I nearly didn’t start it. I was doing the club championship at the time which comprised autotests and autocrosses and of course the club’s main event which was the Trossachs Rally. I remember driving down the road from Aberfoyle in my Avenger and turning into the first stage and pulling up behind some other cars just setting off. I just sat there watching them spewing gravel and slithering sideways. I was sitting there in my check shirt, window open, elbow on the sill and half hoop roll-cage and I thought, ‘this isn’t for me’. I actually selected reverse gear and was going to do a 3 point turn and go home when I noticed another three cars had pulled up behind me and because there was no room on the forest road to turn round I was stuck. At the end of that first stage I was hooked. Honestly I was that close to not getting involved in rallying.”