Chris and Peter McCallum won the Albar Kames trophy Rally on Sunday, but they were having a rare old tussle with the 1400cc Corsa of Derek Connell and Laura Marshall until the Vauxhall struck trouble on the 13th of 16 stages. The two cars tied on exactly the same times over the first two stages then Derek made a wee mistake on the third and dropped 6 seconds to Chris on the third and equalled him again on the fourth.

On SS8, the Escort bent a steering arm against a tyre marker, but that was fixed at service ready for the afternoon foray. After 10 stages, Derek and Laura were leading the McCallum family Ford by one second, and after the next two stages, the difference was still one second, then came stage 13.

As the Corsa pulled up to the start line it started misfiring and Derek opted out of the stage at the first bend and headed to service. “The bottom pulley is loose and wobbly which is affecting the crank sensor and giving it a misfire,” said Derek. There was no way the car could carry on like that, so the disconsolate crew packed up and headed for home.

That left McCallum in control and with the afternoon tests a bit more open than the morning runs, there was no way that Jordon Black could improve on second place in the wee Citroen: “We just couldn’t match the Escort for pace,” said Jordan, “but I’m pleased with that, although we did have a bolt drop out of the engine mounting. I wasn’t worried about the clattering from underneath – it happened the last time the car was out. In fact it might have even my fault, I didn’t tighten the bolt enough.” This time he used the plumber’s favourite ploy, and added some silicone to the bolt threads!

Gary Keenan was third in the Manta and using this event as a shakedown for the Dog Leap Stages in Northern Ireland in a couple of weeks time, and a good job he did. “On the very first corner I went for the handbrake, pulled it out of the floor and handed it to Cammy (Fair – co-driver),” said Gary, “but that was more to do with my welding skills than sheer brute strength.” Apparently, Gary had been attempting to weld a new handbrake mounting and linkage prior to the rally. So it’s back to night school to do the second course of ‘Welding for Beginners’, eh, Gary?

Niall Thomson was fourth in the Saxo despite clouting a tyre and bending the suspension and a steering arm and Blair Brown was the final senior finisher in fourth place in his ‘spare’ Peugeot. He managed to cowp the ‘good’ car on the Scottish but it wasn’t ready to rally at Kames so brought out the old 205 which lacks the power and handling of the newer motor. But at his age, it’s all about ‘seat time’ as us ‘old hands’ would say, and trying different set-ups and that’s what’s good about Kames.

David Connell retired with gear linkage problems, but it was a fault inside the ‘box, and not the external linkage so that’s why they were out, and Lindsay Taylor was sidelined when a wire inside the distributor shorted out. It took them ages to find the cause but it was just a bit of insulation which had rubbed away and was very hard to spot. 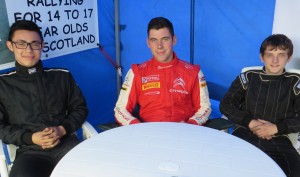 Alex Vassallo and Neil Colman won the Junior Kames event in their Citroen, but had a real fight on their hands with Dylan O’Donnell and Tom Middlemiss just 9 seconds behind at the finish. Vassallo kept his nose in front all day with O’Donnell either matching him or just losing out by a second here and there although he did get two fastest times.

Alex was never under any real pressure though, any time Dylan got really close he put in a couple of quick laps: “The only pressure I feel is the pressure I put on myself,” said Alex. It was only O’Donnell’s second time in the new Peugeot after his Micra: “I had an hour in it at Knockhill before I came here, so this was my first event,” said Dylan, but was also extremely lucky. “On the last stage I ran out of petrol and it just spluttered over the line,” he laughed, then got his family and crew to push him back into the service area.

Michael Robertson finished third in his Toyota and was lucky to do so: “I hit a tyre then bounced over another two, but it was only the bumper that was damaged!” said Michael, “but I’ve got rubber tyre marks all along the underside the of the car.” Last time he was here he tore the exhaust off the car, so he was luckier this time.

Brodie Balfour was pleased with fourth place in the Toyota which had a new gearbox, diff and exhaust since its Crail outing and Brandon Walsh was fifth ahead of Harris Wilson. On only his second rally and first visit to Kames, Finlay Retson finished 7th, while newcomer Cameron Russell was the eighth and final finisher. Dale Kelly failed to finish after smacking a tyre wall. He just got a front wheel on the gravel at the long curve in front of the service area and slid on to the grass into the tyres.

Michael Dickie had a more dramatic retirement when he rolled the Toyota. Michael climbed out under his own steam, but felt a bit light headed after his aerial spin, while co-driver Martin Frost had to be cut out of the car. Both were taken to hospital purely as a precautionary measure although regarded as ‘walking wounded’.