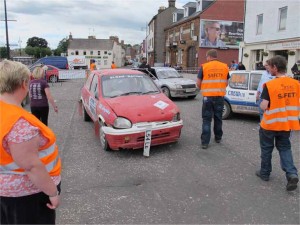 Scott MacBeth was lucky to finish the Scottish Rally let alone win the 1400 class in his Nova. He drowned out in the watersplash at Heathhall but the engine suffered no lasting damage. Then when a shock absorber broke, Iain Haining gave him one to get him back on the road. Angus Lawrie was second in his Nova despite a puncture on the last stage and Keith Riddick was third in his MG and quite chuffed to be catching cars despite this being only his third outing in the car. Derek Connell was a canny fourth in the Corsa: “The car’s taken a right bollockin’ today, I didn’t do a lot of sliding around because of the conditions.” Linzi Henderson was fifth in her MG after a series of problems all day with the engine immobiliser. It was immobilising itself when it felt like it, not when Linzi was wanting it to! And Scott Sloan’s poor wee Corsa literally staggered across the finish line in Dumfries: “It went nose over tail on a Left 8 in Twiglees,” said Scott, “there were no spectators around but we got it back on the road and finished the rally with a bent rear beam.” He and faither, David, also finished with a few other ‘extras’ – they’ll be bruised and sore for days after this one. James Johns retired his Skoda with a broken driveshaft in the first stage.

Class B3
Top 1600 runner and top Peugeot 205 on the day was Scott Peacock who managed to beat Chuck Blair by 24 seconds. Although Scott was more pleased about the fact that he had beaten his faither Donald, who retired on the final stage with a broken driveshaft. Third was Adrian Stewart despite a major off which resulted in bashed sill and driver’s door, but it could have been worse. The tree stump he hit stopped him going off and staying off. The downside was the driver’s door wouldn’t open so any time they had to wait in a queue, Adrian couldn’t get out and take a breather. The poor soul was half roasted by the finish. In fourth place was the Peugeot of Andy Chalmers who caught a slower car twice and he couldn’t see or get past because of the dust. Donald MacNeill was fifth in the Sunbeam and Thaarique Fazal’s Peugeot was sixth ahead of the Peugeot of Simon Hay. Haining had an uncharacteristic roll in his Nova and so too did young Blair Brown in the QTS Peugeot and David McLoughlin in another Peugeot.

Class B4
Greg McKnight scored an excellent 14th overall and class win in the 2 litre class in his MkII despite a puncture on the penultimate test with Kieran Renton second in his Fiesta R200. Peter Stewart was third in his Fiesta but reckoned he would have finished much higher if his co-driver lost more weight! Alasdair Graham was lucky to get fourth in his Corsa after nearly pulling out in the morning. He was suffering extreme ‘hay fever’ symptoms because of the dust until Helen Beck gave him a nose/mouth mask. If it hadn’t been for that, he reckons he wouldn’t have made it. In fifth place was the Honda of Grant Inglis which had a lose exhaust in the morning and then Grant “made an arse of the quarry and then spun trying to get back on the road.” On the last stage he was lucky again, surviving a Russ Swift two-wheeling moment. Jim Robertson was almost smiling cos the wee Citroen had got him round without too much trouble and finished 6th just ahead of Acky Curran who had plenty to moan about: I had to buy 4 tyres today. Normally 2 would do me. That’s the first time I’ve ever bought 4 tyres on the one event. I’ve never had to put new tyres on the car half way through a rally before!” (I think he was a bit peeved. Ed.) Expected front runner Iain Wilson knocked a wheel off his Nova on the Jock’s test and Duncan Campbell holed the radiator in his Honda Civic.

Class B6
In the Historic class, Matthew Robinson made it 2-All this season when he beat Steve Banister, both in MkIis, but admitted the result would have been much closer had it not been for a puncture on Bannister’s Escort. The 2-All score-line refers to a personal competition between him and Steve as they each have two class wins apiece so far this season. Andy Kelly was third in his MkI ahead of Tom Hewick’s Escort with Charlie Taylor’s three cylinder Escort managing to finish fifth. Steven Smith was leased enough with sixth after an engine rebuild following the Granite, but it needs a bit more setting up as it wasn’t pulling well out of corners. Robert Rook finished seventh in his Escort TC and Peter Humphrey was eighth in the Kadett – after wrong-slotting at Jock’s – one of the shortest stages of the rally! Peter Smith retired his Kadett with clutch failure and Tony Thompson crashed out in the Chevette.

B7
Callum Atkinson was the only finisher in the class in his Fiesta having survived an overshoot in SS2 and an off in SS3: “I thought it was over,” he said, “but it just goes to show, you should never give up. Look, I won the class.” He did too. Graeme Schoneville had been going well in the Civic till a bottom arm broke grounding the Honda in the final stage.

B9
If more folk realised that a BMW is just a German Escort with a different badge, cheaper parts and easier to get more power out of, then Robert Harkness might get a bit more competition in his BMW 316i. As it was Gordon Main finished second in class in his own BMW after a straight-on in SS3 and then like a gentleman pulled over to let a catching car through – then couldn’t see for dust! So much for being sporting and polite.

B10
Top Group N runner was Fraser Wilson in his Mitsubishi finishing with the car in one piece despite a front puncture in Twiglees. The other GrpN runners both fell off, Andrew Gallacher in the first stage, and Calum MacLeod big time in the Subaru on the third.

B12
The top eleven overall were the same top eleven in Class 12 with Brian Watson finishing just outside the top ten in his Lancer. Scott McCombie now has something his big brother Bruce will never have – a 100% finishing record. Scott’s first event was the Granite and now this. Two finishes in his Lancer. Result. Kevin Robertson was happy enough in the Lancer on his fourth rally, finishing 13th ahead of the Subaru of Ellya Gold who was still celebrating his previous day’s birthday. Michael Robertson was 15th in the Subaru and Alasdair Anderson’s Subaru was the final finisher despite the car overheating on the third stage. Only it wasn’t. When he tried to fill it up with water, he found it was full. It was just a faulty switch! The jump in SS3 accounted for Gary Wilson, Fraser MacNicol and Alasdair Reid amongst others, although Sandy Arbuthnott didn’t get that far. The Metro having enough of it half way through the first stage. Even if Sandy had a pickup full of lucky white heather, he’d never see a finish line. He’s just about the unluckiest rally driver ever. One of these days though, eh, just one of these days. The boy can pedal if he’s got the motor. You’ll see.